Popular Science
Issue: Nov, 1940
Posted in: Communications, Radio
3 Comments on What Are the Facts About FM? (Nov, 1940) 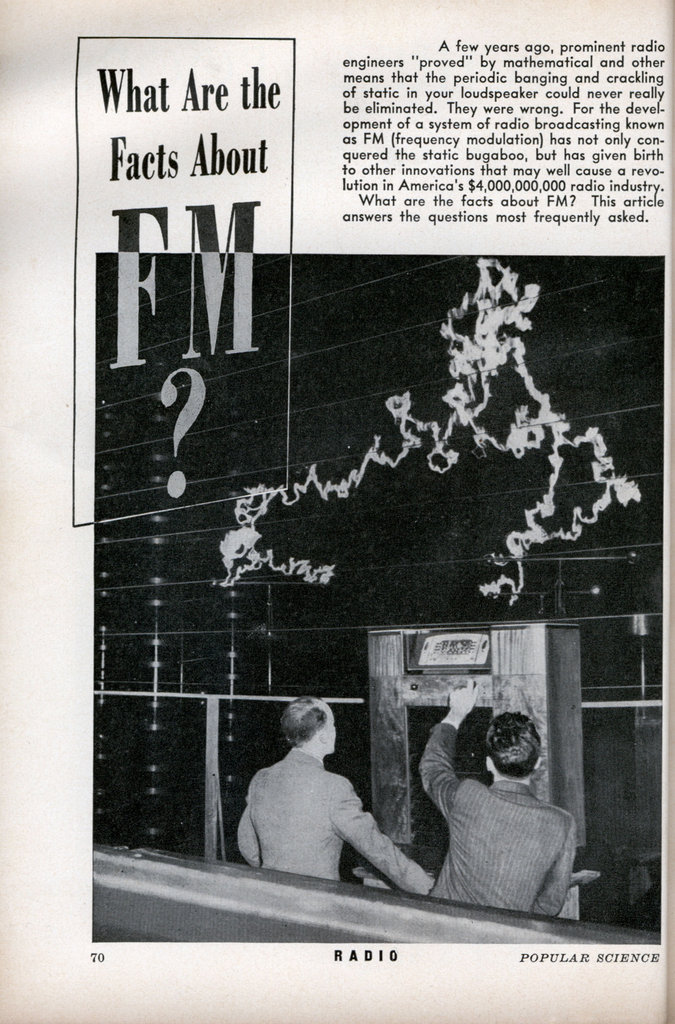 What Are the Facts About FM?

A few years ago, prominent radio engineers “proved” by mathematical and other means that the periodic banging and crackling of static in your loudspeaker could never really be eliminated. They were wrong. For the development of a system of radio broadcasting known as FM (frequency modulation) has not only conquered the static bugaboo, but has given birth to other innovations that may well cause a revolution in America’s $4,000,000,000 radio industry. What are the facts about FM? This article answers the questions most frequently asked.

* First of all, just what is FM? Frequency modulation, generally shortened to the initials FM, is a new type of radio communication that is static-free and almost unbelievably lifelike in tone.

* What is the name for the present system of broadcasting? Amplitude modulation, or AM.

* Are FM programs being broadcast at the present time? Yes, from a number of transmitters operating under experimental licenses, most of them in the East and the Mid-West. You may not be able to get FM programs in your locality at the present time, but every month new FM stations are springing up in all parts of the country. Broadcasting of FM programs on a commercial basis is scheduled to start early next year, according to present plans.

* Can I hear FM programs on my present set?

No. To hear FM programs you must have a special FM receiver.

* What wave lengths does FM use? FM has been assigned a band in the ultra-high-frequency range, extending from 42,000 to 50,000 kilocycles. That wave length is far below the regular broadcasting stations you hear at the bottom of your radio dial.

* Will the introduction of FM make my present radio obsolete? No. Your favorite programs will continue to be broadcast by the existing AM method for some time to come. Your present set won’t be able to pick up the programs broadcast solely by FM transmitters, but FM’s proponents expect that the major radio shows will soon be broadcast by both FM and AM simultaneously. Possibly both types of broadcasting will continue to exist side by side. But if FM ever entirely replaces AM, a good many years will have passed and you will be in the market for a new set anyway, as your present receiver will be obsolete.

* Do all the experts believe that FM is so superior that it will eventually knock AM completely out of the picture? No. Some think that AM is plenty good enough as it is. Others feel that improvements in AM methods could approximate FM’s toneâ€”and anyway, they argue, you don’t need super-high-fidelity to enjoy “Amos ‘n’ Andy.” Because FM’s range is comparatively small (fifty to 100 miles), many more stations will be required, and the problems of a coast-to-coast FM network are many. But FM supporters see advantages in many of the points that FM opponents list as drawbacks.

* Are FM receivers on the market now ? Yes.

* How much do they cost? From about $600 for the most elaborate type down to around fifty dollars for a small set. This smaller unit can be hooked up to your present radio so that you can enjoy both AM and FM programs from your present loudspeaker. Most of the new FM sets will receive AM programs as well. Most manufacturers expect the price to come down as FM-set sales volume rises.

* Don’t you hear any static with FM Well, General Electric engineers recently placed a radio cabinet housing both an AM and an FM receiver in the laboratory where they create million-volt artificial-lightning storms. They tuned the AM set to WABC, in New York City, and the FM set to W2XMN, Major Armstrong’s experimental transmitter at Alpine, N.J., which was rebroadcasting WABC programs by frequency modulation. With the man-made lightning snapping only a few feet away, they turned the AM set on and heard nothing but a bedlam of static from the loudspeaker. Then they switched to the new FM receiver. The program came through with almost perfect clarity, with nothing but a slight undertone of static buzz, too faint to mar the program.

* That sounds convincing, but suppose I tuned in an FM set during a real lightning storm. Would I hear the program clearly and without static? Yes.

* Well, suppose I sat next to an FM set and shaved with an electric razor. Wouldn’t the man-made static caused by the razor motor be reproduced in the loudspeaker? No. And the same holds true for oil-burner motors, diathermy machines, vacuum cleaners, and all the other common static makers.

* How about the tone of an FM radio. Is it really better than an AM set? Yes. FM is astoundingly lifelike: Two comedians carrying on a dialogue sound as though they were hidden just behind your loudspeaker grille. Symphony music is so clear and brilliant that you can practically pick out each instrument. For FM reproduces a far greater range of audible frequencies than present methods. Extremely high and low tones that are now lost, are reproduced by FM with near-perfect fidelity.

* How about interference, squealing, and fading caused by two stations on the same or near-by wave lengths ? Does FM eliminate that annoyance? Yes. As long as the station you want to hear comes in twice as strong as any other station on the same or near-by wave lengths, you hear only the station of your choice; the others will be blocked out completely. With AM, one station must be from twenty to fifty times stronger than another before it gains the upper hand.

* But suppose an FM receiver was located halfway between two FM transmitters broadcasting on exactly the same frequency? Which would you hear? Another General Electric test will answer this query. FM signals were broadcast on exactly the same frequency by two transmitters, one in Albany, N.Y., and the other in Schenectady, N.Y., about fifteen miles away. An FM radio was installed in an automobile, and the car driven between the two cities. In Albany and for about half the distance to Schenectady, only the Albany transmitter could be heard. Halfway between the two cities, first one and then the other station would come in, depending on the contour of the ground over which the automobile was passing. But either station could be heard in this halfway zone when a directional antenna was employed. As the car proceeded toward Schenectady, only the transmitter there could be heard. At no time during the entire run did the transmitters interfere.

* Without getting technical, just what is the difference between FM and AM? To answer that without wallowing hip deep in technicalities is practically impossible, even if you are one of the few radio owners who understand exactly how their sets function. But with amplitude modulation, the signal is broadcast on a constant, unvarying wave length, with the sound modulations being accomplished by varying the power, or amplitude. With FM, the reverse is true: The power is constant, and the modulation is accomplished by varying the wave length, or frequency, within a narrow limit.

* Will FM be used only for regular broadcasting? No, it has revolutionary possibilities in the fields of police, aviation, and military radio as well. The Chicago Police Department, after a series of tests with two patrol cars cruising side by side, one equipped with an AM set and the other with an FM, plans to install FM equipment in 200 police cars. The U. S. Army and Navy also have been experimenting with FM.