Very cool. This article was written back when they still had a big network of pneumatic tubes connecting all of the post offices in Manhattan. 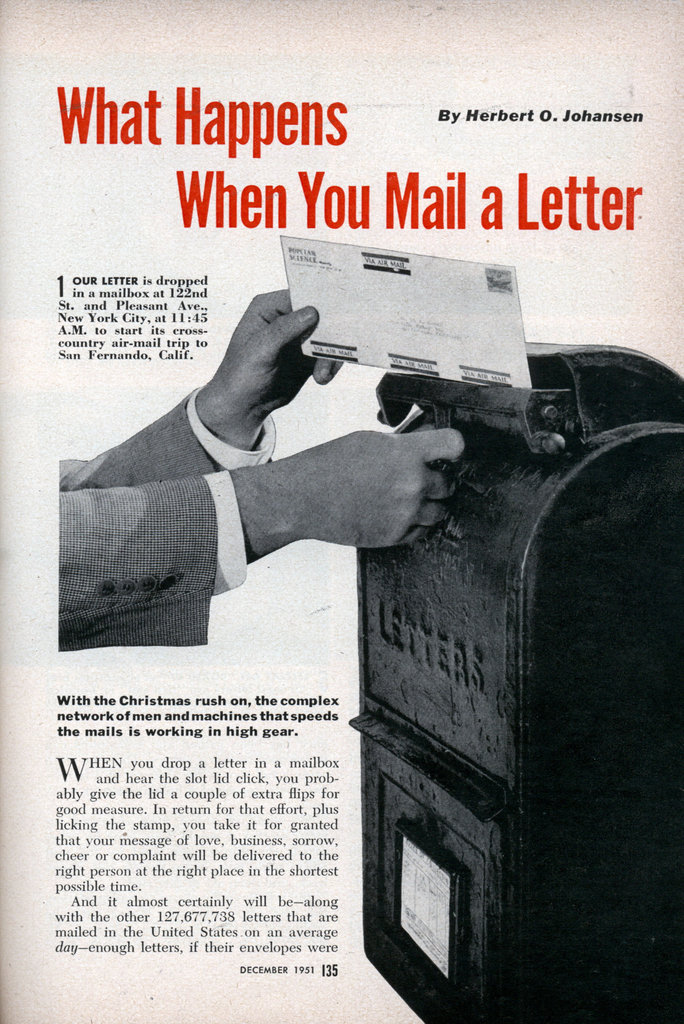 What Happens When You Mail a Letter

With the Christmas rush on, the complex network of men and machines that speeds the mails is working in high gear.

WHEN you drop a letter in a mailbox and hear the slot lid click, you probably give the lid a couple of extra flips for good measure. In return for that effort, plus licking the stamp, you take it for granted that your message of love, business, sorrow, cheer or complaint will be delivered to the right person at the right place in the shortest possible time.

And it almost certainly will beâ€”along with the other 127,677,738 letters that are mailed in the United States on an average dayâ€”enough letters, if their envelopes were laid end-to-end, to reach from New York to Shanghai.

For the inside story of the intricate machinery that makes this possibleâ€”to be told by following one letter through its adventures in the U. S. mailsâ€”a PS reporter and photographer called first on New York City Postmaster Albert Goldman in the imposing building that has become famous for the quotation across its facade:

Neither snow nor rain nor heat nor gloom of night stays these couriers from the swift completion of their appointed rounds.

Mr. Goldman explained that this quotation from Herodotus was a tribute to mounted postal couriers used by the Persians dur-ing a war with the Greeks in 500 B.C.

With that historical note taken care of, we learned a few facts about the modern postal system here:

â€¢ It has 41,193 post offices of all types throughout the country.

Now, with the blessings of the Post Office Department, we were ready to mail our guinea-pig letter.

We labeled it air mail to mark the 40th anniversary of the country’s first air-mail flightâ€”a five-mile hop between Garden City and Mineola, N.Y., on Sept. 23, 1911.

We dropped it in a box near Manhattan’s Triborough station to give it a good send-off. It could start through the only intra-city pneumatic-tube dispatch system used by the post office.

In operation since 1897, the tube system is 27 miles long, forming a loop that connects 21 stations. Into it go about 95,000 projectile-like carrier cylinders a day, speeding some 5,000,000 pieces of mail to their destinations at 30 miles an hour.

We addressed our letter to Tom Carrell, an automobile dealer in San Fernando, Calif., so we could show you the helicopter-delivery system operating from Los Angeles. Chicago is now the only other city having ‘copter mail service, but it undoubtedly will be extended elsewhere when more experience has been gained and helicopters can be released from war service. Their use often saves a full day in the delivery of a letterâ€” two days in case of a holiday or over week ends.

We could, of course, have addressed our letter so that it would have gone by other means of transportation used by the post office: train, boat, motor launch, bus, horseback, and even ski or dog sled.

But whatever the means of transportation,, the post office asks only that a letter be addressed so that it can be delivered. Although this is sometimes a challenge, there are surprisingly few “nixies”â€”letters so illegible or indefinite in address that they end up in the dead-letter office.

Clerks Must Be Detectives

Then there are the wags who like to match wits with the post office. Some address letters in Morse code, in musical notes or by telephone numbers (the latter are ignored). The chemically minded use such tricks as H20 Town for Watertown.

You can mail almost anything. Some articles are barred, however, such as poisons, explosives and live animals, except honeybees, day-old chicks, alligators under 20 inches and “other harmless creatures expected to reach their destination in good condition.”

And if you want your mail to arrive in good condition on time during the Christmas rush (which is expected to add almost two billion pieces of mail), mail early, address painly, wrap securely.