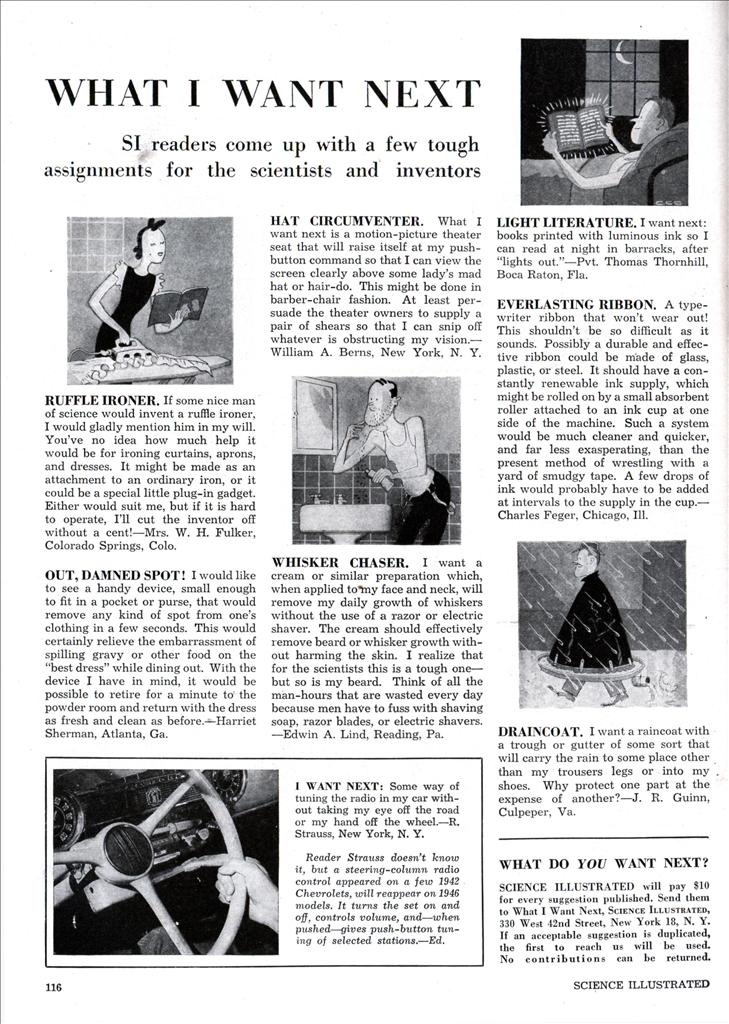 WHAT I WANT NEXT

RUFFLE IRONER. If some nice man of science would invent a ruffle ironer, I would gladly mention him in my will. You’ve no idea how much help it would be for ironing curtains, aprons, and dresses. It might be made as an attachment to an ordinary iron, or it could be a special little plug-in gadget. Either would suit me, but if it is hard to operate, I’ll cut the inventor off without a cent!
—Mrs. W. H. Fulker, Colorado Springs, Colo.

OUT, DAMNED SPOT! I would like to see a handy device, small enough to fit in a pocket or purse, that would remove any kind of spot from one’s clothing in a few seconds. This would certainly relieve the embarrassment of spilling gravy or other food on the “best dress” while dining out. With the device I have in mind, it would be possible to retire for a minute to the powder room and return with the dress as fresh and clean as before.
—Harriet Sherman, Atlanta, Ga.

HAT CIRCUMVENTER. What I want next is a motion-picture theater seat that will raise itself at my pushbutton command so that I can view the screen clearly above some lady’s mad hat or hair-do. This might be done in barber-chair fashion. At least persuade the theater owners to supply a pair of shears so that I can snip off whatever is obstructing my vision.
— William A. Berns, New York, N. Y.

LIGHT LITERATURE. I want next: books printed with luminous ink so I can read at night in barracks, after “lights out.”
—Pvt. Thomas Thornhill, Boca Raton, Fla.

EVERLASTING RIBBON. A typewriter ribbon that won’t wear out! This shouldn’t be so difficult as it sounds. Possibly a durable and effective ribbon could be made of glass, plastic, or steel. It should have a constantly renewable ink supply, which might be rolled on by a small absorbent roller attached to an ink cup at one side of the machine. Such a system would be much cleaner and quicker, and far less exasperating, than the present method of wrestling with a yard of smudgy tape. A few drops of ink would probably have to be added at intervals to the supply in the cup.
— Charles Feger, Chicago, Ill.

WHISKER CHASER. I want a cream or similar preparation which, when applied to my face and neck, will remove my daily growth of whiskers without the use of a razor or electric shaver. The cream should effectively remove beard or whisker growth without harming the skin. I realize that for the scientists this is a tough one— but so is my beard. Think of all the man-hours that are wasted every day because men have to fuss with shaving soap, razor blades, or electric shavers.
—Edwin A. Lind, Reading, Pa.

DRAINCOAT. I want a raincoat with a trough or gutter of some sort that will carry the rain to some place other than my trousers legs or into my shoes. Why protect one part at the expense of another?
—J. R. Guinn, Culpeper, Va.

I WANT NEXT: Some way of tuning the radio in my car without taking my eye off the road or my hand off the wheel.—R. Strauss, New York, N. Y.

Reader Strauss doesn’t know it, but a steering-column radio control appeared on a few 1942 Chevrolets, will reappear on 1946 models. It turns the set on and off, controls volume, and—when pushed—gives push-button tuning of selected stations.—Ed.

WHAT DO YOU WANT NEXT?

SCIENCE ILLUSTRATED will pay $10 for every suggestion published. Send them to What I Want Next, Science Illustrated, 330 West 42nd Street, New York 18, N. Y. If an acceptable suggestion is duplicated, the first to reach us will be used. No contributions can be returned.