Modern Mechanix
Issue: Mar, 1932
Posted in: General
Tags: inventors, patents
No Comments on What Invention Have You Patented? (Mar, 1932) 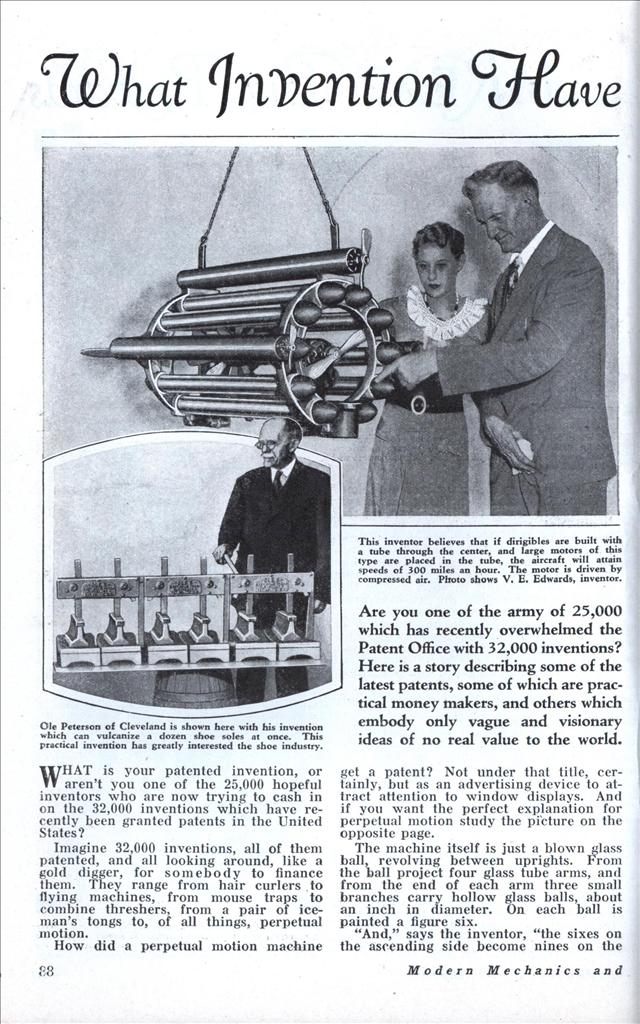 What Invention Have You Patented?

WHAT is your patented invention, or aren’t you one of the 25,000 hopeful inventors who are now trying to cash in on the 32,000 inventions which have recently been granted patents in the United States?

Imagine 32,000 inventions, all of them patented, and all looking around, like a gold digger, for somebody to finance them. They range from hair curlers to flying machines, from mouse traps to combine threshers, from a pair of iceman’s tongs to, of all things, perpetual motion.

How did a perpetual motion machine get a patent? Not under that title, certainly, but as an advertising device to attract attention to window displays. And if you want the perfect explanation for perpetual motion study the picture on the opposite page.

The machine itself is just a blown glass ball, revolving between uprights. From the ball project four glass tube arms, and from the end of each arm three small branches carry hollow glass balls, about an inch in diameter. On each ball is painted a figure six.

“And,” says the inventor, “the sixes on the ascending side become nines on the descending side, and nine is so much more than six that it just naturally overbalances the latter.”

All right, then—you guess what makes it work.

Then we have one of the biggest potential money makers of the lot—a power brake which can be applied to any automobile, whether passenger car or truck. It eliminates the need of using your clutch and brake pedals entirely, everything being done with a trick accelerator.

A piston traveling in a vacuum cylinder under the hood, getting its vacuum power like some windshield wipers by tapping the intake manifold, is controlled by a valve operated from the accelerator pedal. Four hundred pounds pressure is available, if needed, to work the brakes.

Then we have a metal holder to carry a pack of cigarets in the car. Next is a humidor device to fit into the pocket size tin can of smoking tobacco. And here is a combination fly’ and mouse trap which apparently can be regulated to do everything from spanking the victim to killing him quite dead.

There are patents on twenty baseball games, cardboard affairs with toy size players on a cardboard diamond. Radio broadcast of big league games explains their prevalence. It has aroused home interest in baseball and the games are nice to follow the broadcast, or to teach the wife what a Texas Leaguer or a hot grounder to short really means.

Speaking of inventions in wholesale quantities, there’s at least a dozen types of new automobile bumpers, and nobody has been able to count the number of manual and electrical signals designed to tell the car behind what you are planning to do.

In addition to the usual collection of manually operated metal hands, there’s one that combines the hand idea with the old style revolving signal used by traffic cops. Move a lever and it lights up and displays, at will, the words right, left and stop. But then there’s always the suspicion that the fellow that bumps you from behind doesn’t know enough to read English, anyway.

Here’s another one that ought to make money, a penny-in-the-slot platform scale. The legend above the slot explains it is a secret scale, only you can see the figure. Probably that shows you are overweight and need a bit of exercise.

Well, your penny has dropped into view behind the glass front, and is poised in front of a small golf club, operated by a hand lever. Here’s where you get the exercise. Swing the lever and knock the penny around a miniature golf course. If you make a hole in one the penny rolls out a slot and is returned to you. Weight and exercise both for nothing.

A boat wearing rubber boots just walked by carrying a man. A second look shows the man is in the rubber boots and the boat, about six feet long, is hung around his waist from suspenders. The duck hunter wears it to go wading. When he gets out of his depth he floats and kicks himself along with his feet. Zipper fasteners in the deck cover fore and aft give access to storage space for the ducks.

One of the niftiest inventions is held by a Toronto inventor. It is a neat little wall cabinet, like an old-time folding desk. A metal stand at the top holds the telephone and also acts as the shade for a light. Pull down the front cover and there’s your desk, with book and pad inside.

A quick survey of the 32,000 exhibits discloses an astonishing thing. There isn’t a single radio device in the lot—if we except a television set and a radio cabinet. That complete absence of everything pertaining to the electrical side of radio indicates the extent to which the manufactured, all-electric set has absorbed the market.

Two shots ring out. But it is just an inventor opening a door to demonstrate his burglar alarm. When the burglar opens the door three inches to take a peek, that fires one blank cartridge right under his nose. If that doesn’t scare him to death, and he opens it another three inches there’s a second shot.

Here’s a boon to skaters, a life-saving device. Around your waist you wear an inflated inner tube to keep you afloat. A system of cordage supports a wooden hoop five feet in diameter. If you fall through the ice the hoop catches on the edge of the holt.

Or if you are a lazy skater you might like the sitting down skate. The runner is half a dozen feet long, and the rest of it is a modified bicycle framework and seat, propelled, like the great grand-daddy of the bicycle, by pushing with the feet.

A Break for Witches Ever ride a broomstick when you were small and call it a horse? Well, what do you think they’ve done with the broomstick now? Simply fitted a wheel on its lower end to reduce friction and then attached a bicycle seat so the rider can sit down at his work!

And if your child is too young for that, why here’s a chap with a nursing bottle holder for the baby. An aluminum arm, adjustable, of course, attaches to a bracket on the side of the crib and holds the bottle at any angle. No—the holder is only designed to take that one size of round bottles.

A college professor from a southern agricultural college presents Saucy Susy, a child’s teeter totter of his own invention. It takes three children to teeter it. One sits in a box amidships, and the box slides back and forth to alternately change the center of balance. After seeing that you can believe the story on the sign about the chorus girl who got rich inventing a filing system for offices!

In the luxury class there is a bridge outfit, table and four seats, which folds up and becomes its own suitcase, and a luxurious, striped canvas, nickeled metal frame bed for the pet dog.

Clothes, anything on which a design patent can be issued, are quite common. They range from patented ventilated coveralls to a combination garment which provides a complete set of underthings in one for the coed, and does everything but wipe her nose. That design patent game is a great one and there is a lot of inventive brains busy doping out trick new things to wear.

Tooth brush holders, like baseball games, apparently thrive on radio broadcasting, which has made gums a polite word. They range from a fancy gadget which holds a brush for each day of the week, to a small glass bottle, held inverted by a wall bracket, and with a neck so small the brush can’t slip out of its own accord. In other words, no falling dust can touch it Numerically, devices for the automobile probably lead all others, and there is a large representation of airplane ideas and gadgets. One inventor is presenting a more or less solid rubber inner tube for auto tires. There’s an enormous working model of an automatic parking garage, a small, roofless garage fitted with an automatic door opening and closing device, operated by wheel contacts in the floor.

Railroad devices are not numerous, but there are a few. Probably the most interesting is an automatic device for delivering train orders to a moving train. Among other things it includes a signal light with an illuminated front, which, from a point a mile down the track, announces to the approaching engineer that there is an order waiting a mile ahead.

A pair of reversible propellers represent that still experimental field in aviation. Besides providing a variable pitch prop for the plane, one is also adapted for motorboats, so that one control wheel gives speed ahead, slows down, stops and reverses.

Other patents include a great variety of wheeled toys, games, and some of the other devices described in this article. They are devices, mainly, which have been built by either skilled mechanics or expert model makers.