Popular Science
Issue: Mar, 1922
Posted in: Motorcycles
1 Comment on What Paris Has to Show Us in the Line of Speedy Cycle Cars (Mar, 1922)

What Paris Has to Show Us in the Line of Speedy Cycle Cars (Mar, 1922) 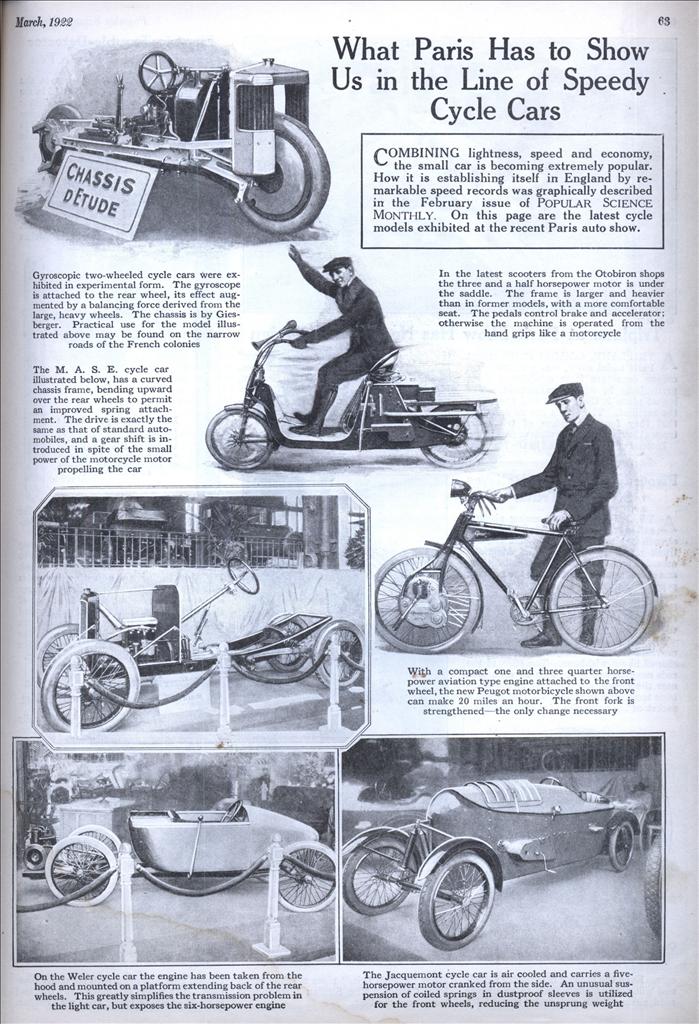 COMBINING lightness, speed and economy, the small car is becoming extremely popular. How it is establishing itself in England by remarkable speed records was graphically described in the February issue of POPULAR SCIENCE MONTHLY. On this page are the latest cycle models exhibited at the recent Paris auto show.

Gyroscopic two-wheeled cycle cars ere exhibited in experimental form. The gyroscope is attached to the rear wheel, its effect augmented by a balancing force derived from the large, heavy wheels. The chassis is by Giesberger. Practical use for the model illustrated above may be found on the narrow roads of the French colonies.

The M. A. S. E. cycle car illustrated below, has a curved chassis frame, bending upward over the rear wheels to permit an improved spring attachment. The drive is exactly the same as that of standard automobiles, and a gear shift is introduced in spite of the small power of the motorcycle motor propelling the car.

On the Weler cycle car the engine has been taken from the hood and mounted on a platform extending back of the rear wheels. This greatly simplifies the transmission problem in the light car, but exposes the six-horsepower engine.

In the latest scooters from the Otobiron shops the three and a half horsepower motor is under the saddle. The frame is larger and heavier than in former models, with a more comfortable seat. The pedals control brake and accelerator; otherwise the machine is operated from the hand grips like a motorcycle.

With a compact one and three quarter horsepower aviation type engine attached to the front wheel, the new Peugot motorbicycle shown above can make 20 miles an hour. The front fork is strengthenedâ€”the only change necessary.

The Jacquemont cycle car is air cooled and carries a five-horsepower motor cranked from the side. An unusual suspension of coiled springs in dustproof sleeves is utilized for the front wheels, reducing the unsprung weight.