Popular Electronics
Issue: Jul, 1958
Posted in: Radio, Space
No Comments on What the Sputniks Said (Jul, 1958) 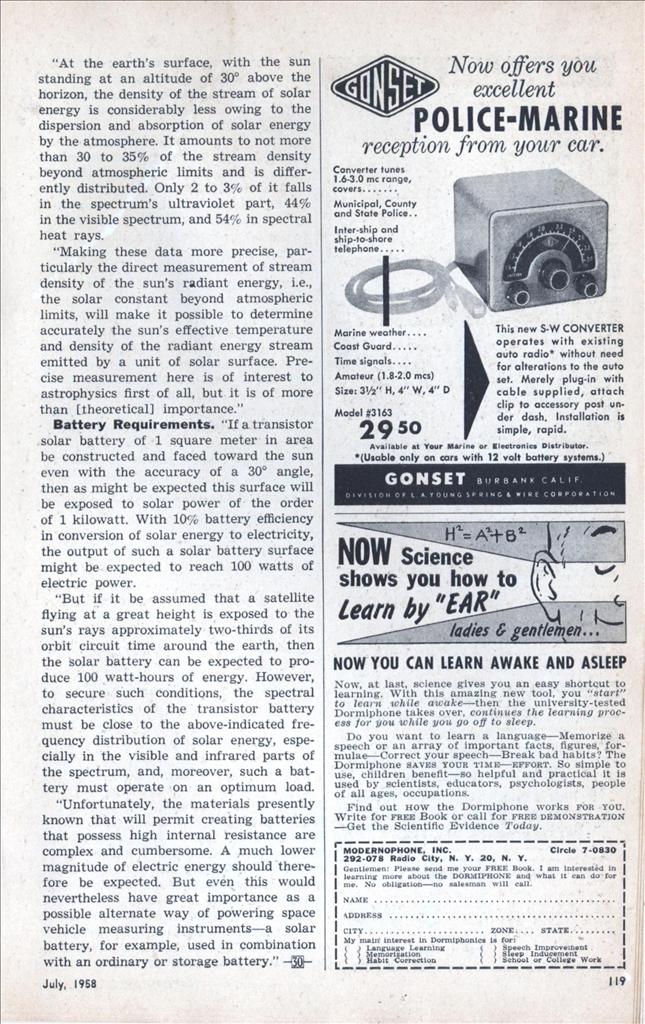 Radio LISTENERS who tracked the earth-circling travels of Sputnik I have reported new discoveries in short-wave propagation, including a round-the-world echo, according to preliminary findings published in a recent issue of Radio, a Russian popular electronics journal.

What the Sputniks discovered about prospects for using solar power to operate space vehicle instruments is also discussed in the Moscow journal. These reports on Russia’s pioneer space vehicles’ discoveries, the first to be published, are translated here.

Propagation Conditions. “Preliminary results of reception of Sputnik I radio signals,” writes Prof. A. Kazantsev, Doctor of Technical Sciences, in Radio, “show that in the 15-meter wave band these signals were received at very great distances, far surpassing the distance of direct visibility and in a number of cases reaching 10, 000 kilometers. Very valuable material on possible ways of short-wave propagation can be derived from study of the data on long-distance reception of these signals.

“Concerning the northern hemisphere, especially interesting short-wave propagating conditions were created. At certain intervals Sputnik I was above the F2 layer of maximum ionization, at others below it, and at certain times close to the maximum.

“When Sputnik I was above layer F2, then passing from above through the mass of the ionosphere, the radio waves were reflected from the earth’s surface and propagated further by single or multiple reflection from layer F2 in those areas where its critical frequency had sufficiently high values (Fig. 1).

“It is also possible that radio waves coming into the ionosphere from above at a sloping angle are considerably refracted and therefore penetrate into an area outside the bounds of direct geometric visibility (Fig. 2).

“When Sputnik I was below layer F2 (Fig. 3), and approached an observation point from a global area lighted by the sun, the radio signals on the 15-meter wave band could come from the satellite to a point of reception, after going through consecutive reflections from layer F2 and the earth’s surface, and then through direct visibility.”

Limited Reception. “If the satellite, after passing over the observation point, moved away into an unlighted area of the globe, signal reception ceased in a relatively short distance, depending on limits of visibility.

“Non-symmetrical reception conditions were also observed. When the satellite was close to layer F2 of maximum ionization, then especially favorable conditions might develop for the formation of radio-wave conducting channels able to propagate radio waves over very long distances (Fig. 4).

“There is evidence, in fact, that along with satellite signals which reached the observation point by the shortest route, signals were sometimes received that had traveled around the globe (round-the-world radio echo). One of the USSR’s most skillful radio amateurs, Yu. N. Prozorskiy of Moscow, on October 8 at 0007-0008 hours recorded the reception of such a round-the-world radio echo in the 15-meter wave band.

“Concerning signals in the 7.5-meter wave band, as far as can be judged at present, they were as a rule received in the limits of direct visibility, although in certain cases owing to high values of daytime critical frequencies of the F2 layer, this wave could be propagated also outside direct visibility.

“A conclusion can be drawn as to precisely what way radio-wave propagation occurred after correlation has been established between the altitudes of Sputnik I and the real altitudes of the F2 layer at one and the same moment, and analysis of the propagation conditions.”

Sun’s Radiation. Discussing preliminary findings of Sputnik II with respect to solar radiation in outer space, Russian Academician A. I. Berg, leading Russian authority on space-flight electronics, wrote in Radio: “Of special interest for radio specialists was the data picked up by the second Soviet satellite on solar radiation in the short-wave band which has a direct effect on conditions in the upper layers of the atmosphere.

“During the course of more than a hundred years, scientists have been exploring the intensity and spectral composition of the radiant energy which falls on the earth from the sun, and have on this basis indirectly been attempting to determine what these magnitudes are for conditions outside the earth’s atmosphere.

“The most reliable data at present permit assuming that the density of the stream of the sun’s radiant energy, beyond the limits of the atmosphere, is equal to 1.4 kilowatt per square meter. In actinometry and meteorology, this magnitude is called the ‘solar constant.’ About 9% of this stream falls on the ultraviolet part of the solar spectrum, about 40% on the visible part, and 51% on the far red and infrared parts of the sun’s spectrum.

“At the earth’s surface, with the sun standing at an altitude of 30° above the horizon, the density of the stream of solar energy is considerably less owing to the dispersion and absorption of solar energy by the atmosphere. It amounts to not more than 30 to 35% of the stream density beyond atmospheric limits and is differently distributed. Only 2 to 3% of it falls in the spectrum’s ultraviolet part, 44% in the visible spectrum, and 54% in spectral heat rays.

“Making these data more precise, particularly the direct measurement of stream density of the sun’s radiant energy, i.e., the solar constant beyond atmospheric limits, will make it possible to determine accurately the sun’s effective temperature and density of the radiant energy stream emitted by a unit of solar surface. Precise measurement here is of interest to astrophysics first of all, but it is of more than [theoretical] importance.”

Battery Requirements. “If a transistor solar battery of 1 square meter in area be constructed and faced toward the sun even with the accuracy of a 30° angle, then as might be expected this surface will be exposed to solar power of the order of 1 kilowatt. With 10% battery efficiency in conversion of solar energy to electricity, the output of such a solar battery surface might be expected to reach 100 watts of electric power.

“But if it be assumed that a satellite flying at a great height is exposed to the sun’s rays approximately two-thirds of its orbit circuit time around the earth, then the solar battery can be expected to produce 100 watt-hours of energy. However, to secure such conditions, the spectral characteristics of the transistor battery must be close to the above-indicated frequency distribution of solar energy, especially in the visible and infrared parts of the spectrum, and, moreover, such a battery must operate on an optimum load.

“Unfortunately, the materials presently known that will permit creating batteries that possess high internal resistance are complex and cumbersome. A much lower-magnitude of electric energy should therefore be expected. But even this would nevertheless have great importance as a possible alternate way of powering space vehicle measuring instruments—a solar battery, for example, used in combination with an ordinary or storage battery.” —