Well, we do have flat-screen computers you can write on that fit in a briefcase, but I’m still waiting to take my 250 MPH car to a business meeting in another domed city. Perhaps by the end of the year. 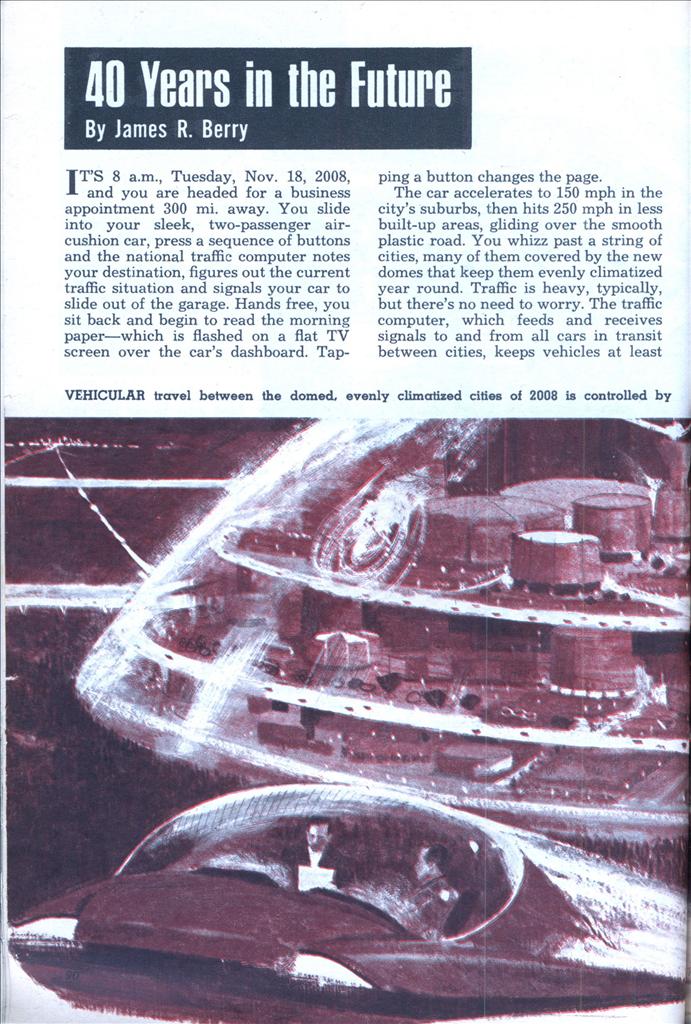 40 Years in the Future

IT’S 8 a.m., Tuesday, Nov. 18, 2008, and you are headed for a business appointment 300 mi. away. You slide into your sleek, two-passenger air-cushion car, press a sequence of buttons and the national traffic computer notes your destination, figures out the current traffic situation and signals your car to slide out of the garage. Hands free, you sit back and begin to read the morning paperâ€”which is flashed on a flat TV screen over the car’s dashboard. Tapping a button changes the page.

The car accelerates to 150 mph in the city’s suburbs, then hits 250 mph in less built-up areas, gliding over the smooth plastic road. You whizz past a string of cities, many of them covered by the new domes that keep them evenly climatized year round. Traffic is heavy, typically, but there’s no need to worry. The traffic computer, which feeds and receives signals to and from all cars in transit between cities, keeps vehicles at least 50 yds. apart. There hasn’t been an accident since the system was inaugurated. Suddenly your TV phone buzzes. A business associate wants a sketch of a new kind of impeller your firm is putting out for sports boats. You reach for your attache case and draw the diagram with a pencil-thin infrared flashlight on what looks like a TV screen lining the back of the case. The diagram is relayed to a similar screen in your associate’s office, 200 mi. away. He jabs a button and a fixed copy of the sketch rolls out of the device. He wishes you good luck at the coming meeting and signs off.

Ninety minutes after leaving your home, you slide beneath the dome of your destination city. Your car decelerates and heads for an outer-core office building where you’ll meet your colleagues. After you get out, the vehicle parks itself in a convenient municipal garage to await your return. Private cars are banned inside most city cores. Moving sidewalks and electrams carry the public from one location to another.

With the U.S. population having soared to 350 million, 2008 transportation is among the most important factors keeping the economy running smoothly. Giant transportation hubs called modemixers are located anywhere from 15 to 50 mi. outside all major urban centers. Tube trains, pushed through bores by compressed air, make the trip between modemixer and central city in 10 to 15 minutes.

A major feature of most modemixers is the launching pad from which 200-passenger rockets blast off for other continents. For less well-heeled travelers there are SST and hypersonic planes that carry 200 to 300 passengers at speeds up to 4,000 mph. Short tripsâ€” between cities less than 1,000 mi. apartâ€”are handled by slower jumbo jets.

Homes in Mi’s 80th year are practically self-maintaining. Electrostatic precipitators clean the air and climatizers maintain the temperature and humidity at optimum levels. Robots are available to do housework and other simple chores. New materials for siding and interiors are self-cleaning and never peel, chip or crack.

Dwellings for the most part are assembled from prefabricated modules, which can be attached speedily in the configuration that best suits the homeowner. Once the foundation is laid, attaching the modules to make up a two- or three-bedroom house is a job that doesn’t take more than a day. Such modular homes easily can be expanded to accommodate a growing family. A typical wedding present for the 21st century newlyweds is a fully equipped bedroom, kitchen or living room module.

Other conveniences ease kitchenwork. The housewife simply determines in advance her menus for the week, then slips prepackaged meals into the freezer and lets the automatic food utility do the rest. At preset times, each meal slides into the microwave oven and is cooked or thawed. The meal then is served on disposable plastic plates. These plates, as well as knives, forks and spoons of the same material, are so inexpensive they can be discarded after use.

The single most important item in 2008 households is the computer. These electronic brains govern everything from meal preparation and waking up the household to assembling shopping lists and keeping track of the bank balance. Sensors in kitchen appliances, climatizing units, communicators, power supply and other household utilities warn the computer when the item is likely to fail. A repairman will show up even before any obvious breakdown occurs.

Computers also handle travel reservations, relay telephone messages, keep track of birthdays and anniversaries, compute taxes and even figure the monthly bills for electricity, water, telephone and other utilities. Not every family has its private computer. Many families reserve time on a city or regional computer to serve their needs. The machine tallies up its own services and submits a bill, just as it does with other utilities.

Money has all but disappeared. Employers deposit salary checks directly into their employees’ accounts. Credit cards are used for paying all bills. Each time you buy something, the card’s number is fed into the store’s computer station. A master computer then deducts the charge from your bank balance.

Computers not only keep track of money, they make spending it easier. TV-telephone shopping is common. To shop, you simply press the numbered code of a giant shopping center. You press another combination to zero in on the department and the merchandise in which you are interested. When you see what you want, you press a number that signifies “buy,” and the household computer takes over, places the order, notifies the store of the home address and subtracts the purchase price from your bank balance. Much of the family shopping is done this way. Instead of being jostled by crowds, shoppers electronically browse through the merchandise of any number of stores.

People have more time for leisure activities in the year 2008. The average work day is about four hours. But the extra time isn’t totally free. The pace of technological advance is such that a certain amount of a jobholder’s spare time is used in keeping up with the new developmentsâ€”on the average, about two hours of home study a day.

Most of this study is in the form of programmed TV courses, which can be rented or borrowed from tape _ * libraries. In fact most schoolingâ€”from first grade through collegeâ€”consists of programmed TV courses or lectures via closed circuit. Students visit a campus once or twice a week for personal consultations or for lab work that has to be done on site. Progress of each student is followed by computer, which assigns end term marks on the basis of tests given throughout the term.

Besides school lessons, other educational material is available for TV viewing. You simply press a combination of buttons and the pages flash on your home screen. The world’s information is available to you almost instantaneously.

TV screens cover an entire wall in most homes and show most subjects other than straight text matter in color and three dimensions. In addition to programmed TV and the multiplicity of commercial fare, you can see top Broadway shows, hit movies and current nightclub acts for a nominal charge. Best-selling books are on TV tape and can be borrowed or rented from tape libraries.

A typical vacation in 2008 is to spend a week at an undersea resort, where your hotel room window looks out on a tropical underwater reef, a sunken ship or an ancient, excavated city. Available to guests are two- and three-person submarines in which you can cruise well-marked underwater trails.

Another vacation is a stay < on a hotel satellite. The rocket ride to the satellite and back, plus the vistas of earth and moon, make a memorable vacation jaunt. While city life in 2008 has changed greatly, the farm has altered even more. Farmers are business executives running operations as automated as factories. TV scanners monitor tractors and other equipment computer programmed to plow, harrow and harvest. Wires imbedded in the ground send control signals to the machines. Computers also keep track of yields-, fertilization, soil composition and other factors influencing crops. At the beginning of each year, a print-out tells the farmer what to plant where, how much to fertilize and how much yield he can expect. Farming isn't confined to land. Mariculturists have turned areas of the sea into beds of protein-rich seaweed and algae. This raw material is processed into food that looks and tastes like steak and other meats. It also is cheap; families can have steak-like meals twice a day without feeling a budget pinch. Areas in bays or close to shore have been turned into shrimp, lobster, clam and other shellfish ranches, like the cattle spreads of yesteryear. Medical research has guaranteed that most babies born in the 21st century will live long and healthy lives. Heart disease has virtually been eliminated by drugs and diet. If hearts or other major organs do give trouble, they can be replaced with artificial organs. Medical examinations are a matter of sitting in a diagnostic chair for a minute or two, then receiving a full health report. Ultrasensitive microphones and electronic sensors in the chair's headrest, back and armrests pick up heartbeat, pulse, breathing rate, galvanic skin response, blood pressure, nerve reflexes and other medical signs. A computer attached to the chair digests these responses, compares them to the normal standard and prints out a full medical report. No need to worry about failing memory or intelligence either. The intelligence pill is another 21st century commodity. Slow learners or people struck with forgetful-ness are given pills which increase the production of enzymes controlling production of the chemicals known to control learning and memory. Everyone is able to use his full mental potential. Despite the fact that the year 2008 is only 40 years awayâ€”as far ahead as 1928 is in the pastâ€”it will be a world as strange to us as our time (1968) would be to the pilgrims. â€¢