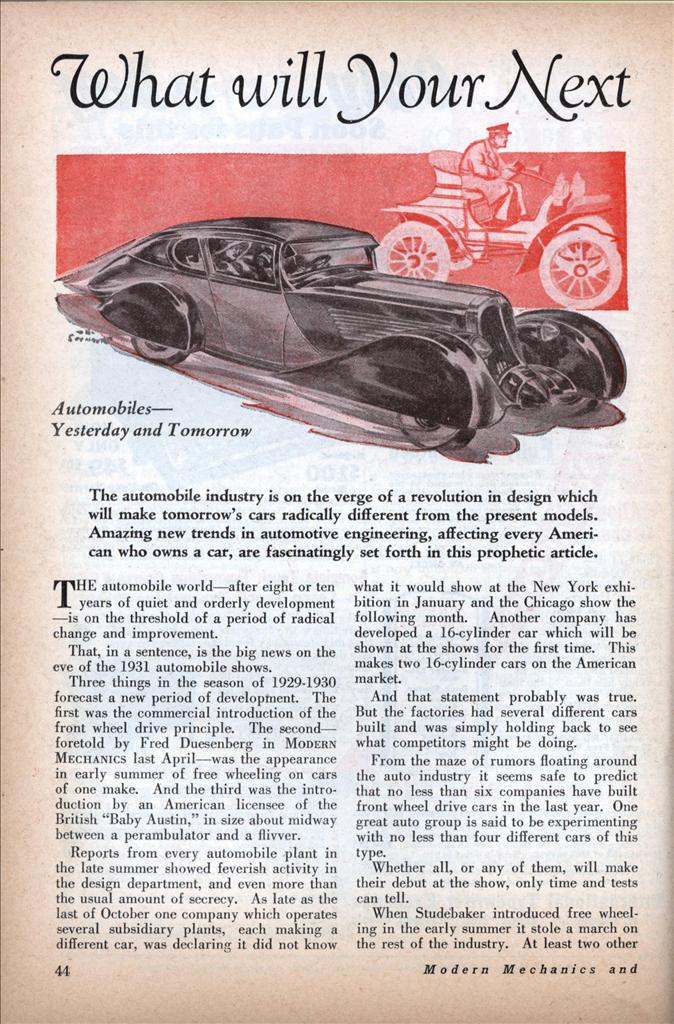 The automobile industry is on the verge of a revolution in design which will make tomorrow’s cars radically different from the present models. Amazing new trends in automotive engineering, affecting every American who owns a car, are fascinatingly set forth in this prophetic article.

THE automobile world—after eight or ten years of quiet and orderly development —is on the threshold of a period of radical change and improvement.

That, in a sentence, is the big news on the eve of the 1931 automobile shows.

Three things in the season of 1929-1930 forecast a new period of development. The first was the commercial introduction of the front wheel drive principle. The second— foretold by Fred Duesenberg in Modern Mechanics last April—was the appearance in early summer of free wheeling on cars of one make. And the third was the introduction by an American licensee of the British “Baby Austin,” in size about midway between a perambulator and a flivver.

Reports from every automobile plant in the late summer showed feverish activity in the design department, and even more than the usual amount of secrecy. As late as the last of October one company which operates several subsidiary plants, each making a different car, was declaring it did not know what it would show at the New York exhibition in January and the Chicago show the following month. Another company has developed a 16-cylinder car which will be shown at the shows for the first time. This makes two 16-cylinder cars on the American market.

And that statement probably was true. But the factories had several different cars built and was simply holding back to see what competitors might be doing.

From the maze of rumors floating around the auto industry it seems safe to predict that no less than six companies have built front wheel drive cars in the last year. One great auto group is said to be experimenting with no less than four different cars of this type.

Whether all, or any of them, will make their debut at the show, only time and tests can tell.

When Studebaker introduced free wheeling in the early summer it stole a march on the rest of the industry. At least two other companies had been testing free wheeling devices last winter and in the early spring, with equipment designed under other patents than those used by Studebaker. Free wheeling, as Fred Duesenberg, the famous auto designer, explained in Modern Mechanics of last April, is to the automobile what the coaster brake was to the bicycle.

In the early days of the bicycle the engine —represented by the rider’s legs—pushed the machine up. the hills and continued to operate on the down grades. When the coaster brake came along the human engine pushed the load up grade, and then rested and saved its energy while coasting down. The free wheeling device, which is built into the transmission behind the gear box, does just that. As soon as car momentum exceeds engine speed the car coasts, instead of turning the engine over against compression, in the same way that the first bicycles turned the rider’s legs. Naturally there is a saving in gasoline and a saving in wear and tear. And—not the least important—it is as easy to shift from high down to second or first as it is to shift upward, and shifting can be done without the use of the clutch. In fact the clutch need only be used when starting.

With other patents available it is safe to say that the free wheeling principle will soon be extended to other makes of cars. Aside from that the things which have engrossed automobile manufacturers’ attention this summer include: Lighter cars, made possible by more extensive use of aluminum alloys, both for bodies and in engine and other parts.

Experiments in Germany just after the war showed that the ideal design for an automobile would be the so-called “tear drop”, rounded in front and trailing away to a thin edge in the rear—the most perfect streamline shape. To apply it in its best form to an automobile the engine should be located at the rear, in order to utilize the large front section for passenger space. Several cars were built in Germany along these lines, principally as the result of experimental work done by the Rohrbach brothers, famous for their all-metal airplanes. A few were imported to this country, but the design did not take hold and eventually disappeared.

It was revived this summer in England, however, by no less a person than Sir Charles Denistoun Burney, the head of the company which built the airship R-100, which made a trip during the summer to Montreal and other Canadian and American border points.

Sir Charles built up several luxurious cars to this design and a company has been organized to manufacture them in England. Despite the limitations of a streamlined body and their low overall height, they have ample room for seven passengers.

Aside from their tear drop lines they are chiefly notable for their clean exterior. The headlights are built into the body lines and the two spare wheels and tires are carried within the doors of the rear compartment, thus eliminating the wind resistance due to ordinary side wheel mounts.

The front fenders, instead of projecting from the body, are very small, attached to the wheels, and turn with them, so that the total wind resistance of the wheel and fender is but little more than that of the wheel alone. The rear fenders are practically all concealed within the body lines.

Because of the narrow front of the body, made possible by the absence of an engine, the front wheels can turn fifty degrees, enabling the car to turn in a very small radius. Tests are said to show that the car can operate at a given speed with one-half the power required to move a car of ordinary design, and at a saving of 50 percent of the usual gas consumption.

The effect of wind resistance has not been given much consideration by automobile designers. Their method of increasing speed has been to increase the power, and therefore the cost of operation. Beyond speeds of 60 to 75 miles an hour, however, the rising curve of gas consumption has assumed such proportions as to become almost prohibitive for any but the very rich. A high powered American car which has a top speed of about 120 miles an hour gets but. four miles to the gallon as it nears that speed. Airplane and airship designers, such as Burney, have appreciated the fact, which automobile designers have ignored, that the top speed of a car is the point at which the wind resistance plus road resistance equals the power transmitted to the wheels. The road resistance is a fixed factor, but if the wind resistance can be reduced the car either will go faster with the same power, or attain its previous top speed with less power.

The special racing cars built for the Daytona Beach record tests were marvels of streamlining. In the late Sir Henry O. D. Segrave’s car streamlining was carried to such perfection that the car threatened to leave the ground and fly through the air at high speeds, and the same trouble has been experienced with other racers at Daytona.

While the effect of the wind on a moving body is spoken of as resistance, the trouble is chiefly due to a partial vacuum in the rear of the body, and not to the air pressure in front of it. With a streamline form the air diverted in front is brought around to the rear and joined again without setting up swirls, and hence there is no thin air pocket following along behind the body to hold it back.

In the Burney car the currents are carried smoothly back until, at the rear, the only obstruction is a small projection of the motor hood. Cooling air for the engine is brought in from the bottom and exhausted through the louvres in the tail of the body and the motor hood. The only objection to this practice is that the air from beneath the car is filled with road dust, but with modern air cleaning methods that probably will not be a drawback. The air drawn through the engine compartment is exhausted at the tail in such a way as to fill in any partial vacuum spot which might be created by the projecting motor hood.

Another car recently introduced in England is a little eight horse power roadster which is claimed to have a top speed of seventy-five miles an hour. At the Olympia motor show another of the baby cars, described as a miniature Rolls Royce because of the perfection of its appointments, featured a sliding roof panel for sunlight and ventilation.

Frameless, multiple shift cars, such as the European-built Tatra, are also attracting attention in the design departments at Detroit. One manufacturer imported a Tatra and is putting it though exhaustive tests. The Tatra has twelve speeds and individual wheel mounting which eliminates a frame, in the usual sense of the word.

It is the nearest approach on the market today to the dream of a gear-shiftless car with an infinite range of speeds, virtually a speed for every added revolution of the engine. Several years ago a Greek engineer in London named Constantinesco developed a torque converter which eliminated gear shifting, and it was tried with some success, but has not as yet proven practical in volume production.

The theory of the Constantinesco device requires higher mathematics and considerable knowledge of physics to explain or understand, but in operation it allows the engine to idle without transmitting motion to the wheels. When the accelerator is depressed and the engine speeds up the torque converter changes its motion and begins to impart rotary motion to the shaft, the speed of the motion depending on the engine speed and the resistance of the car. In other words, starting from a dead stop, the device imparts the engine revolutions to the transmission in the form of few revolutions at high power, and as the car gets under way and resistance decreases the converter changes its movement and transmits more revolutions at less power. It automatically adjusts its speed to the power required to overcome resistance.

Other developments which have at present not gone beyond the laboratory stage include the use of compressed air engines and the use of dual motors in gear. It would be possible to install a compressed air engine powerful enough to drive a car, using a fuel tank to hold a small supply of the compressed air, but obviously this would be unsatisfactory on a long trip. To get around this objection, the gasoline motor under the hood would be used to build up air pressure, which in turn would be transmitted to the rear axle. This system of propulsion would give more flexibility than is possible with present gas engines.