Mechanix Illustrated
Issue: Oct, 1958
Posted in: Personal Appearance
16 Comments on WHAT YOU WILL WEAR TOMORROW (Oct, 1958) 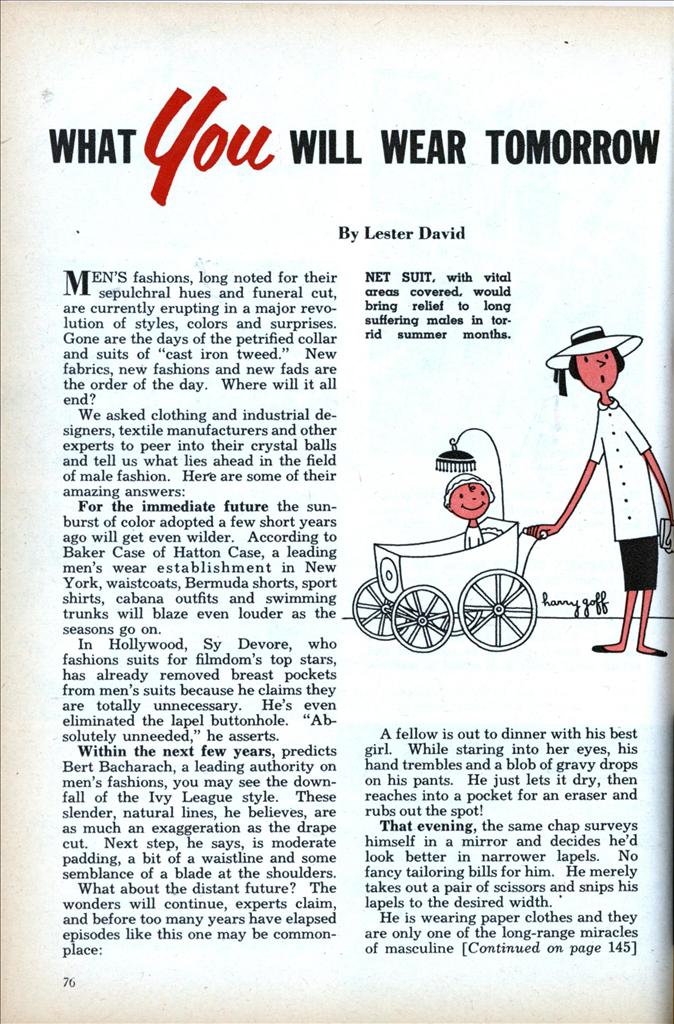 WHAT YOU WILL WEAR TOMORROW
By Lester David

MEN’S fashions, long noted for their sepulchral hues and funeral cut, are currently erupting in a major revolution of styles, colors and surprises. Gone are the days of the petrified collar and suits of “cast iron tweed.” New fabrics, new fashions and new fads are the order of the day. Where will it all end?

We asked clothing and industrial designers, textile manufacturers and other experts to peer into their crystal balls and tell us what lies ahead in the field of male fashion. Here are some of their amazing answers: For the immediate future the sunburst of color adopted a few short years ago will get even wilder. According to Baker Case of Hatton Case, a leading men’s wear establishment in New York, waistcoats, Bermuda shorts, sport shirts, cabana outfits and swimming trunks will blaze even louder as the _ seasons go on.

In Hollywood, Sy Devore, who fashions suits for filmdom’s top stars, has already removed breast pockets from men’s suits because he claims they are totally unnecessary. He’s even eliminated the lapel buttonhole. “Absolutely unneeded,” he asserts.

Within the next few years, predicts Bert Bacharach, a leading authority on men’s fashions, you may see the downfall of the Ivy League style. These slender, natural lines, he believes, are as much an exaggeration as the drape cut. Next step, he says, is moderate padding, a bit of a waistline and some semblance of a blade at the shoulders.

What about the distant future? The wonders will continue, experts claim, and before too many years have elapsed episodes like this one may be commonplace: A fellow is out to dinner with his best girl. While staring into her eyes, his hand trembles and a blob of gravy drops on his pants. He just lets it dry, then reaches into a pocket for an eraser and rubs out the spot!

That evening, the same chap surveys himself in a mirror and decides he’d look better in narrower lapels. No fancy tailoring bills for him. He merely takes out a pair of scissors and snips his lapels to the desired width.

He is wearing paper clothes and they are only one of the long-range miracles of masculine [Continued on page 145] fashion foreseen by authorities. Declares Mr. Bacharach: “The changes to come will be utilitarian, not merely a different look. Everything in apparel runs in cycles. We have now reached the zenith of durability in clothes. A suit has a life expectancy of some eight to 12 years. Soon the corner will be turned and suits will have shorter and shorter lives on the theory that men will welcome a good deal of variety in their wardrobes.

‘The ultimate in that phase of the cycle would be a suit a day. That’s right, inexpensive, disposable suits to be tossed in the wastebasket instead of the hamper.

“There will be no buttons to come loose or to lose on these clothes of the future. A small magnet fastened to each side of the jacket will keep the front closed.”

Surprisingly, paper clothes are being produced right now. At the Kimberly-Clark Corp. in Neenah, Wis., technicians are balling up their spattered laboratory smocks and tossing them into a trash can.

These experimental paper clothes can be draped, printed, silk screened and cut and sewn like any other fabric. They can be made to specifications, varying in strength, appearance and texture, and can also be rendered water and flame resistant.

Nor is Kimberly-Clark the only firm experimenting with paper wearables. Cincinnati Industries, Inc., has made a paper bathing suit and a man’s coat and jacket— Ivy League style. Synthetic resins make the material waterproof and opaque. Color can easily be added to this paper fabric, called X-crepe, and the surface can be embossed or printed. It can also be worked exactly like cloth, with sewing, cutting and fancy stitching.

How else can male garb be improved for greater comfort and more efficiency? Officials at Burdick-Rowland Associates, a noted firm of industrial designers, offer these future possibilities.

They suggest a suit made entirely of netting (with the vital areas covered, of course). No part of the netting would touch the wearer. The material would be suspended about a half inch from the body by a simple wire arrangement or small suction cups. What could be cooler for long suffering males in summer?

Another suggestion is clothes with air vents built into them for maximum hot weather comfort. These vents, or air scoops, could be attractively designed and made a part of the suit’s pattern.

A small built-in air-conditioner and de-humidifier operating on transistors would be useful. The jacket housing the device would have to be lightweight and airtight with the neck and sleeves closed.

Communications could also be simplified in the clothing of the future. Ben Fromkin, a Burdick-Rowland designer says, “Why not a two-way telephone built right into the suit, powered by solar light?”

The experts did a lot of cogitating about how to improve men’s shoes. Mr. Fromkin suggests, “Why not high heels which contain a liquid shock absorber. The idea is that each step would not jar the body as much as it does now. The shock absorber would give you a little spring as you walk and the constant battering would be removed from the spinal column, doubtless resulting in fewer backaches.”

Bernard Lazarus, president of King-Size Footwear, a mail order house selling jumbo brogans, thinks stretchable clothing can be an answer to your weight problem. When you gain a few pounds, he reasons, your pants don’t come together in the middle and there’s a tailoring bill for letting them out. Stretch clothing, suits made of an elastic material, would easily accommodate the extra pounds.

What about the vast field of miracle fibers? The authoritative Consumer Reports predicts fibers that will make it unnecessary ever to press or clean a suit. And Dr. Carrol A. Hochwalt, vice president for research, development and engineering of Monsanto Chemical Co., says true synthetic protein fibers may be in the offing.

“These and other test tube fibers still to come,” he says, “will bring new concepts of fashion comfort and economy to the world of fabrics. Filmier than the most gossamer silks, or heavier than the most rugged woolens, they will be practically immune to the effects of age, weather, sunlight and the ravages of insects and decay.”

That, men, is our long-term fashion forecast predicting our New Look. Fashion-wise, things are looking better for us—or at least different—at long last. •