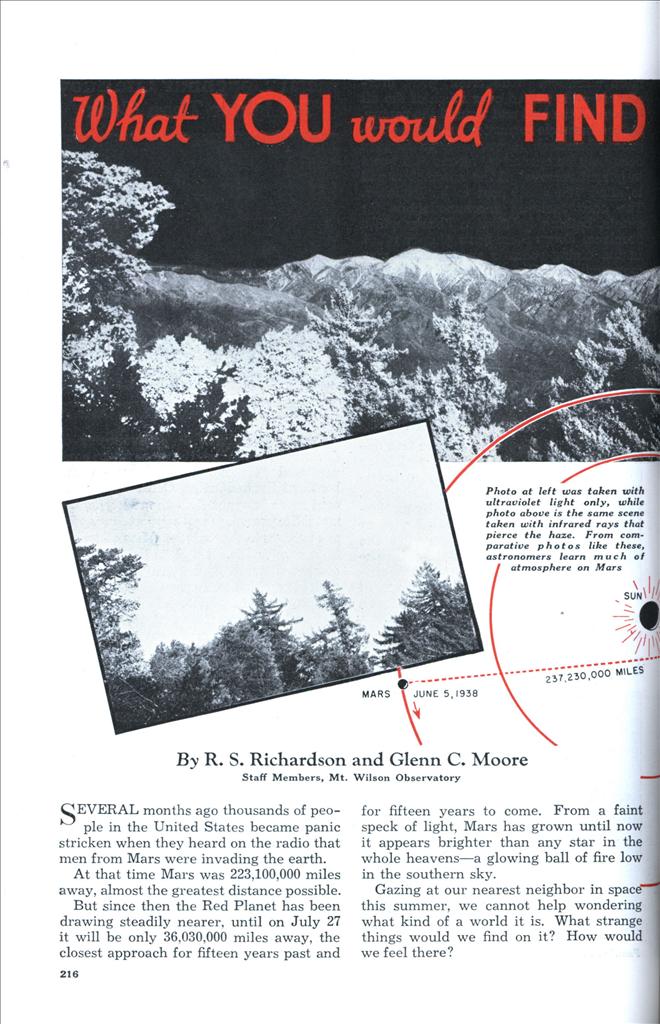 What You would Find on Mars

SEVERAL months ago thousands of people in the United States became panic stricken when they heard on the radio that men from Mars were invading the earth.

At that time Mars was 223,100,000 miles away, almost the greatest distance possible.

But since then the Red Planet has been drawing steadily nearer, until on July 27 it will be only 36,030,000 miles away, the closest approach for fifteen years past and for fifteen years to come. From a faint speck of light, Mars has grown until now it appears brighter than any star in the whole heavensâ€”a glowing ball of fire low in the southern sky.

Gazing at our nearest neighbor in space” this summer, we cannot help wondering what kind of a world it is. What strange things would we find on it? How would we feel there?

Astronomers have much to learn about. Mars, but they do have a very definite knowledge of certain weird effects that an Earth man would experience there as the result of conditions that are actually known to exist from the most recent and the best established astronomical studies.

If we were able to reach Mars, perhaps by space ship, it would be advisable to don a gas mask connected to a tank of air before venturing from our aircraft. For although Mars is known to have an atmosphere sixty miles in depth, it is lacking in oxygen, and may even contain gases that are highly poisonous. Also a high-powered rifle might be handy, for we have no idea of what dangers might await us.

Undoubtedly our first sensation on stepping outside and stretching our legs would be one of amazing lightness. After a few careful trials, we would find that a leap of ten feet in the air required practically no effort at all, and that we could still land without hurting ourselves. Similarly, we could throw a rock the size of our head sixty feet, and broad jump forty feet with ease. The task of unloading the space ship would be quite easy, for we could shoulder 300-pound sacks of provisions without much exertion.

In reality we would be no stronger than at the start of the journey, but the force of gravity on Mars is one-third of that on the earth, and therefore we would seem to be three times stronger. This would be a great advantage if any creatures of Mars attacked us, for if their strength is proportional to the force of gravity to which they are accustomed, we should be the equal of three of them. And if there were too many of them to fight, we should also be able to run faster than they can.

The low force of gravity would probably cause some ludicrous sensations at first. For example, we would have to make a distinct effort to sit down. On bending over, we would discover that the old familiar force we have always relied upon to pull us down the rest of the way is not there any more. And on pouring out a drink, the water would drift lazily through the air as if it were in a slow motion picture. We would also have to set the glass down very gently, for only a slight jar would be enough to splash the water out.

Suppose you had brought along an expensive pendulum clock that had been adjusted carefully before leaving, and a cheap pocket watch for ordinary purposes. After twenty-four hours, if the pocket watch read twelve o’clock noon, the pendulum clock would only have gotten as far as three o’clock in the morning. No matter how many times you took it apart and put it together again it would still go on losing twenty-two and a half minutes per hour compared with the cheap watch.

The trouble arises from the fact that the period of a pendulum depends upon the force of gravity, while the rate at which a spring uncoils does not. The only way to remedy the difficulty would be to make a radical change in the length of the pendulum. On the earth, a pendulum thirty-nine and one-tenth inches long will make a swing once every second, but it would have to be cut down to fifteen inches on Mars to swing once a second. Then the pendulum would drive the clock so that it would keep time with the pocket watch just as it did on the earth.

But even if the two clocks were made to agree, after about a week we would notice something else had gone wrong with them. Gradually both clocks would get out of step with the sun. That is, when the sun was highest in the sky so that we knew the time must be near noon, the clocks might read two o’clock in the afternoon. In this case, the error would be caused by the difference in the rotation period of Mars and the earth, a day on Mars being thirty-seven minutes twenty-two and fifty-eight hundredths seconds longer than here. Therefore, a clock that goes twice around the dial in twenty-four hours would appear to gain about thirty-seven minutes per day on Mars. This would be an easy matter to fix by making a slight change in the rate. It is interesting to note, that the force of gravity and the length of the day on Mars are known by astronomers so accurately, that a space explorer could rate his clock with complete assurance that only a slight adjustment would be required after reaching Mars in order for it to keep perfect time there.

The low surface gravity is caused principally by the fact that Mars is only one-tenth as massive as the earth. While the low force of gravity would give us a funny feeling at first, there is no good reason why we could not soon adjust ourselves to it. Certain other conditions, however, might prove harder to overcome. One of these would be the hardship of preparing a meal. To begin with, we could not cook by fire because there is not enough oxygen in the air of Mars to light a match. All the cooking would have to be done by electricity. Furthermore, although a little heat would soon set the water to boiling vigorously, it would only be lukewarm. For the temperature at which water boils decreases as the pressure of the air gets less. While we cannot say exactly what the air pressure is on Mars, it must be much lower than it is here, perhaps only twenty per cent as much. In this case, water would boil on Mars at a temperature of 140 degrees instead of 212 degrees, and a pressure cooker would be necessary to make it any hotter. The low atmospheric pressure might cause us severe distress, such as deafness and mountain sickness. Indeed, if the pressure were too low, we would have to go around incased in an air-tight suit inflated to atmospheric pressure in order to survive. Otherwise we would explode, like a deep-sea fish that has suddenly been brought to the surface.

Water is exceedingly scarce on Mars, and to be on the safe side we should bring along an abundant supply. There are no oceans, seas, or rivers, over sixty per cent of the planet being a barren desert. Practically the sole remaining source of water is the white deposit at the poles believed to be a layer of snow and ice a few inches thick. The polar cap shrinks with the approach of summer and a dark border forms around it that stays in contact with the cap, presumably due to water from the melting snow. Probably all the water on Mars could be emptied into the Great Lakes.

At noon in the tropics the temperature may rise as high as fifty degrees Fahrenheit. But a few hours after sunset it falls to freezing, and by midnight it must be much colder than the lowest temperatures ever experienced on the earth. It might easily become cold enough to freeze carbon dioxide, causing dry ice to form on the ground like frost. Large white deposits are often seen on the early morning side of Mars, that disappear later in the day as the ground is heated by the sun’s rays.

On the whole, we would find Mars a cold and dreary world, not at all suitable for beings like ourselves.