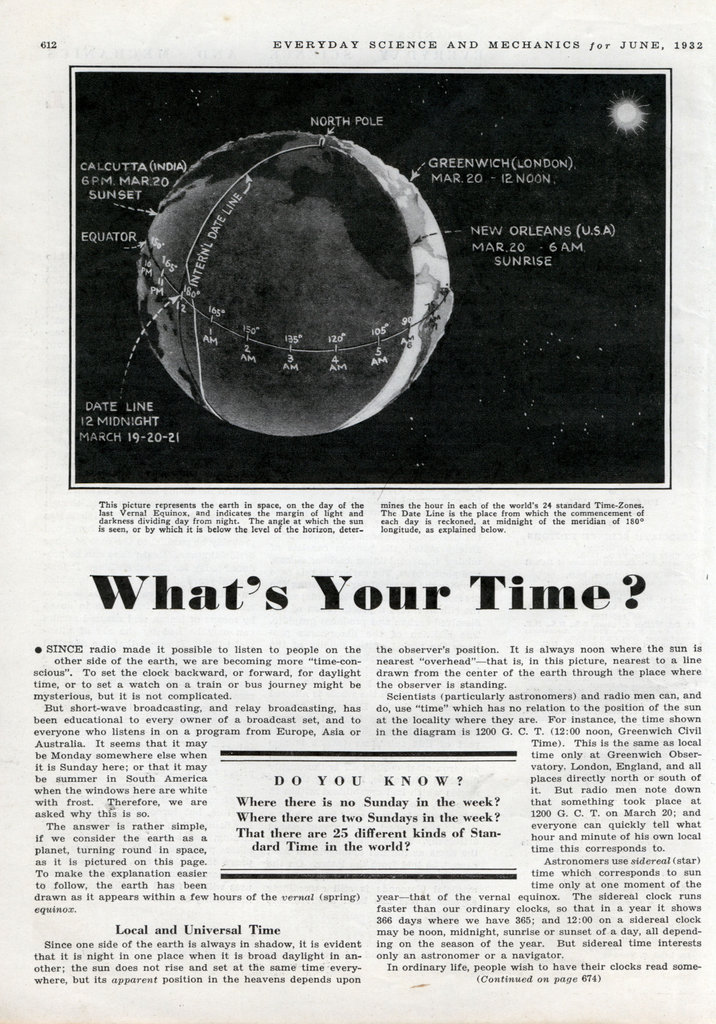 But short-wave broadcasting, and relay broadcasting, has been educational to every owner of a broadcast set, and to everyone who listens in on a program from Europe, Asia or Australia. It seems that it may be Monday somewhere else when it is Sunday here; or that it may be summer in South America when the windows here are white with frost. Therefore, we are asked why this is so.

The answer is rather simple, if we consider the earth as a planet, turning round in space, as it is pictured on this page. To make the explanation easier to follow, the earth has been drawn as it appears within a few hours of the vernal (spring) equinox.

Since one side of the earth is always in shadow, it is evident that it is night in one place when it is broad daylight in another; the sun does not rise and set at the same time everywhere, but its apparent position in the heavens depends upon the observer’s position. It is always noon where the sun is nearest “overhead”â€”that is, in this picture, nearest to a line drawn from the center of the earth through the place where the observer is standing.

Scientists (particularly astronomers) and radio men can, and do, use “time” which has no relation to the position of the sun at the locality where they are. For instance, the time shown in the diagram is 1200 G. C. T. (12:00 noon, Greenwich Civil Time). This is the same as local time only at Greenwich Observatory. London, England, and all places directly north or south of it. But radio men note down that something took place at 1200 G. C. T. on March 20; and everyone can quickly tell what hour and minute of his own local time this corresponds to.

Astronomers use sidereal (star) time which corresponds to sun time only at one moment of the yearâ€”that of the vernal equinox. The sidereal clock runs faster than our ordinary clocks, so that in a year it shows 366 days where we have 365; and 12:00 on a sidereal clock may be noon, midnight, sunrise or sunset of a day, all depending on the season of the year. But sidereal time interests only an astronomer or a navigator.

In ordinary life, people wish to have their clocks read somewhere around noon when the sun is highest. (The sun is irregular in his ways, but not enough to hurt.) Therefore, all over the world, “standard time” has been established by dividing the earth into 24 time-zones. Each is a little over a thousand miles wide at the equator, and tapers to nothing at the poles. In a time-zone all clocks, with a few exceptions for local patriotism, should keep the same time. In the particular time-zone, however, which includes the INTERNATIONAL DATE LINE, while all clocks should keep the same time, all calendars should not keep the same DAY. The reason will be explained later.

Let us refer to the picture again. At the moment specified, which is the same for every country in the globe, though there are 24 sets of clocks showing different hours, the sun is highest at the meridian of Greenwich (Longitude 0Â°) ; it is overhead on the Equator, directly south of Greenwich. The sun is on the horizon at both the North and South Poles; it is rising at the North Pole, and setting at the South Pole. In the northern hemisphere, winter is ending, and spring is beginning; in the southern hemisphere, summer is ending, and autumn is beginning, because the earth is about to turn its South Pole away from the sun, and present the North Pole instead.

It is noon at Greenwich; at the Date Line, in the middle of the Pacific, it is midnight. The farthest point on the earth’s surface, from the sun, is on the Equator at Longitude 180Â° (east or west, it makes no difference). The earth will have to turn a quarter-way round, towards the east, before the Date Line comes to the lighted rim; and in the same time Greenwich will have turned on the hidden side of the earth (in the picture) to the edge of the shadow. This will take six hours; at which time it will be 6 p. m. at Greenwich, and at the Date Line, 6 a. m. of the next day, March 21.

SKIPPING A DAY AT WILL

Since it would be inconvenient to change the date of the day at noonâ€”or, at least, most people are not used to itâ€”it is changed at midnight, when the majority are asleep. Furthermore, since there must be some place where a new day is to be startedâ€”or the calendar would be truly perpetualâ€”the Date Line has been established by common consent in the middle of the Pacific Ocean. It follows the meridian of 180Â° as shown, except where it makes a detour to avoid land. If it ran through the middle of a city, as the meridian of 0Â° does, the results would be very funny, at times.

At the instant of midnightâ€”and only for that instantâ€”it is March 20, the world over. March 19 disappears intoâ€”relativity, let us sayâ€”and March 21 begins its westward course from the Date Line.

Let us suppose that the Date Line, by any chance, crosses an island which has been overlooked. A scientific gentleman establishes himself on the island; surveys the Date Line, and builds a house across it. In fact, he surveys the line so closely that he can draw a line on his bedroom floor to indicate its position; and he moves his bed over the line.

Mr. Crusoe arrives home Saturday evening, March 19, from a day’s tramp about the EAST side of his island; and, after an evening with his books, retires into the east side of his bed. At the hour of 11:59 p. m. on Saturday, he glances up at the clock and, just as its second hand (we suppose that he has an electric clock, suitably regulated by radio, with other modern conveniences) reaches the last interval of the following minute, he rolls over in his bed to the WEST side.

HE IS NOW IN MONDAY MORNING, MARCH 21.

It is now Sunday, March 20, everywhere in the world except in the little half-zone west of the Date Line. But Mr. Crusoe has dodged Sunday and, so long as he lives on his island, he can assure himself that it will never be Sunday where he is.

DOUBLING UP ON THE DAY

On the other hand, the island has a second civilized resident, the Rev. Mr. Robinson, a missionary, who views with disapproval this reckless abolition of the day of rest. Mr. Robinson, in fact, feels that Sundays should be more frequent. He has accordingly built his residence and church directly north of Mr. Crusoe’s house, and also on the Date Line. The church, in particular, is quite roomy; and the Date Line divides it directly in half.

While Mr. Crusoe was spending SATURDAY about his affairs, Mr. Robinson was conducting his regular weekly services, on SUNDAY morning and evening; his congregation sitting in only those pews on the WESTERN side of the edifice.

When Mr. Crusoe rolled over from Saturday into Monday, Mr. Robinson also, from force of habit, awakened, and rolled back from the DEPARTING SUNDAY, on the WEST side of his bed, into the ARRIVING SUNDAY on the EAST side.

While Mr. Crusoe was sleeping to a late hour on Monday morning, Mr. Robinson, in the discharge of his pastoral duties, convened his little flock for the SECOND SUNDAY, MARCH 20; and services were repeated as they had been on the day previous (also Sunday) except that all the congregation, with their minister, were assembled on the EAST side of the line.

Mr. Robinson is quite happy in the assurance that, as long as he remains in residence, there will be two Sundays each week; and he is quite glad to get along without a Monday, blue or otherwise.

In other words, any date can be wiped out entirely, or caused to repeat itself over a second 24 hours, at the option of the residents of Date Line Island.

As a matter of fact, though this seems grotesque, any person crossing the Pacific Ocean either repeats or drops a day. Since the Date Line runs through water, a ship crossing it changes its date at the nearest midnight, just as we have described Mr. Crusoe and Mr. Robinson.

(To anticipate many readers, we freely admit that even greater freedom of tampering with the clock, as well as the calendar, is enjoyed at either the North or South Pole; and we grant any of them full permission to go there and experiment with Father Time’s whiskers as freely as they will.)

And, if you hear from the loud speaker, on a hot Saturday in July, a voice stating casually that “It is a chilly Sunday morning,” the probable answer is that the speaker is in Australia, across the Date Line.