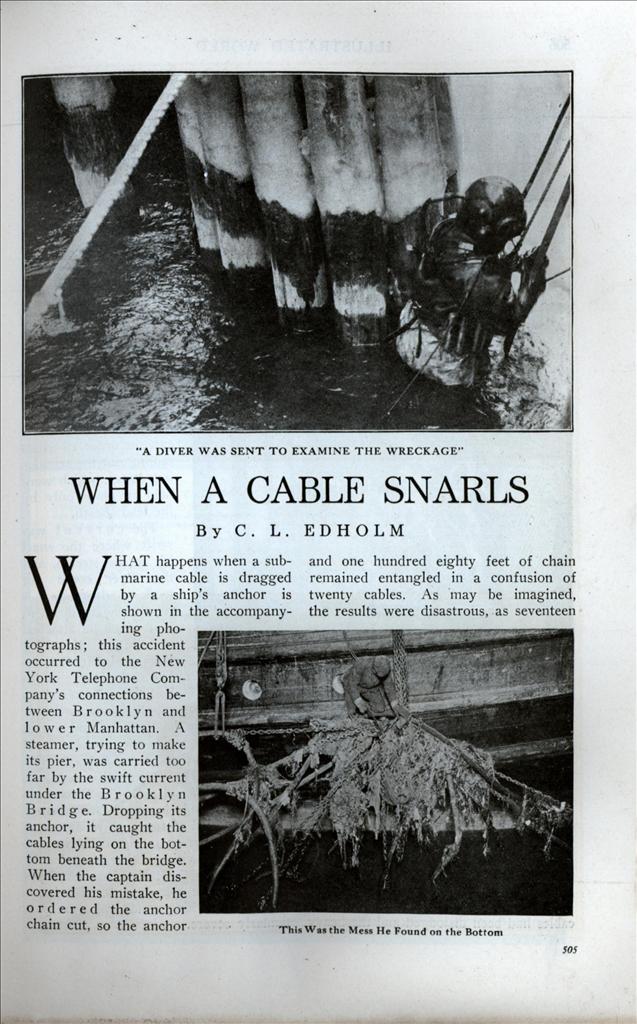 WHEN A CABLE SNARLS

WHAT happens when a submarine cable is dragged by a ship’s anchor is shown in the accompanying photographs ; this accident occurred to the New York Telephone Company’s connections between Brooklyn and lower Manhattan. A steamer, trying to make its pier, was carried too far by the swift current under the Brooklyn Bridge. Dropping its anchor, it caught the cables lying on the bottom beneath the bridge. When the captain discovered his mistake, he ordered the anchor chain cut, so the anchorand one hundred eighty feet of chain remained entangled in a confusion of twenty cables. As may be imagined, the results were disastrous, as seventeenof these cables contained 3,500 pairs; Brooklyn and lower Manhattan were abruptly disconnected.

From the Brooklyn side, the cables together with the large beam to which they were chained were pulled into the stream for a distance of thirty or forty feet and the cable house near the bridge was so filled with a tangle of wires that it was impossible to enter; the complicated connections had been pulled violently out of place. On the New York side things were not so bad, but two cables had been dislodged and the heavypiles which secured them were broken.

While the confusion was being cleared up at the cable houses, and while emergency measures were taken to route messages by a circuitous way, a diver was put to work in the river bed, examining the wreckage on the bottom. It was found impossible to unchain the cables separately so that they could be pulled back one at a time, for they were so entangled that the whole mass must be raised at once. This had to be done with the greatest care in order to avoid pulling out the remain- , ing cables, which were held in place only by the lead sheath.

The current was swift where the snarl lay in the stream, and the diver could not work to advantage. A rope was sent down to him which he attached to one of the ring bolts, and after a number of these wire cables had been fastened to the mass, it was raised slowly by power from the cable boat. The tangle that was raised alongside the vessel seemed absolutely hopeless, but by hard work the cables were separated, unchained from the beam and pulled back one at a time to the cable house and terminated. For a period of four or five days men worked constantly in the cable houses, one shift following another immediately. In completing the task, these employes had to endure the most terrible hardships, for working conditions were particularly severe.