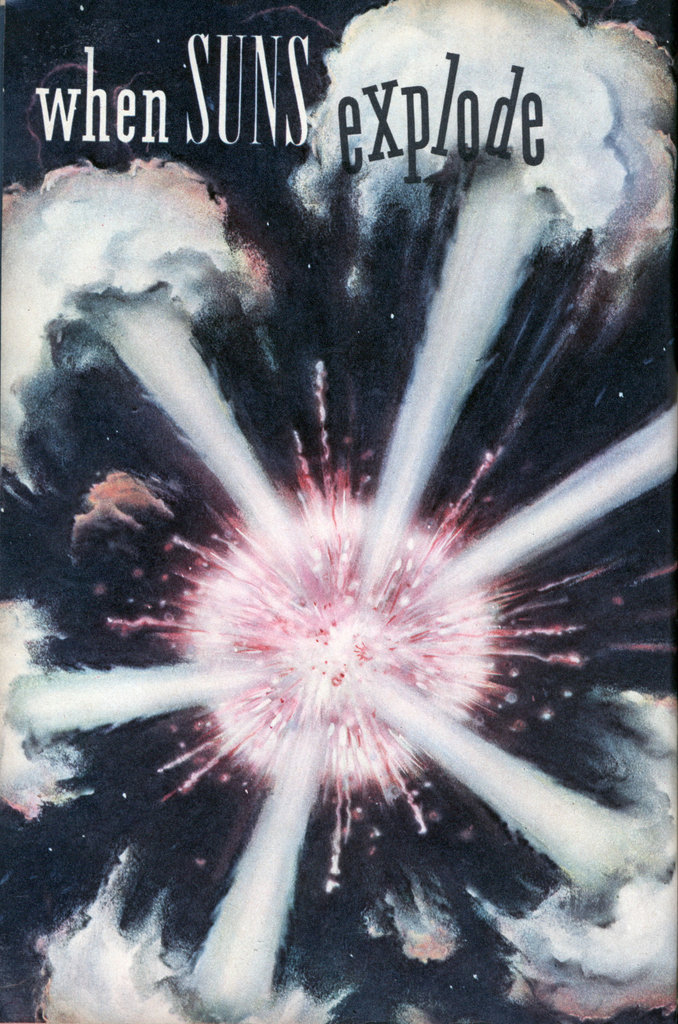 In 1866 a “nova” or so-called “new star’ flashed out in the constellation Northern Crown. It was certainly not a true new star. A distant sun had exploded and greatly in-creased its output of energy. The brilliance faded rapidly until the star could be seen only with a telescope. When it was about hundred times too faint to be seen with the naked eye, it stopped fading. It remained a faint star, fluctuating somewhat in brightness, until Feb. 9, when it blew up again. The astronomers call it T Coronae Borealis, i.e., T (variable star) of the constellation Northern Crown.

In 1866 photography was young and pictures of stars were not possible. But we have followed the variations of T Coronae ever since. We have studied its characteristics, some of them puzzling. Finding the answer to these might give us more information about the nova phenomenon.

We know little about the “pre-nova” stage. There are so many stars that we cannot hope to pick out for special study one that may explode some day. The star gives no advance warning of its approach- The burst of a nova is a fantastic explosion. The increase in stellar brilliance is as startling as if a firefly suddenly glowed like an arc light! The energy dissipated in a nova explosion is equal to more than that of 100 quintillion atomic bombs. A single bomb, to release that much energy, would have to be almost as large as the earth.

Somewhere in the star vast energy is suddenly released. This energy, struggling to escape, works its way to the surface.

The star expands like a soap bubble, all the while increasing m brilliance. Finally, the outer layers are blown entirely away, receding into the distance as filmy wisps of nebulae. Gradually the star subsides to something like its original brilliance. In many novae, some years after the outburst, the fragmentary shell of expanding gas is still dense enough to show up as a nebular ring encircling the star.

The average nova in its final stages appears to be much hotter than it was initially.

Observations indicate that the expanding gases around the star may continue to have a temperature of more than 1,000,000° C. for years after the outburst.

Certain astronomers have suggested that the whole phenomenon of novae is due to collapse of the star, and that the energy released in the explosion was produced by compression within. They argue that the nova is a stage in the star’s evolution, the outburst marking one last splurge before it settles down to enjoy a lengthy old age.

The second outburst of T Coronae, however, clearly proves that the collapse theory is wrong. It tells us that the tendency of a star to blow up is a sort of disease; some inherent structural weakness causes only certain varieties of stars to become novae.

This conclusion is somewhat heartening to us. It renders the chance of our sun’s exploding extremely small. The long record of solar dependability goes back over geological time, more than a billion years. During that interval the sun has never so much as doubled or halved its energy output. The common solar disturbances, such as sun spots or expelled jets of gas, do not indicate that the sun is likely to explode completely, as a few writers have suggested. Perhaps they are “safety valves” that regulate the star, and prevent catastrophe.

There are two other stars that appear to be repeating novae: RS Ophiuchi and T Pyxidis. Neither of these is as clear-cut a case as our recent example. The indications are that T Coronae—before the explosion—may have had an extremely bloated and fairly cool atmosphere surrounding a very hot and tiny core. During the outburst, this surrounding gas is blown out with other material. Thus the star (the minute core) is indeed much smaller after the explosion than before, as the observations demand, but there is no collapse.

The star probably explodes in jets, rather than uniformly all over the surface. The inner regions are so hot that the color of light has a distinct violet hue and the ultraviolet radiation is extremely intense. Along the jets the color changes from violet to blue to dazzling white. There may be a slight tinge of pink on the outer edges of the puffs, where the temperature is lowest. Between successive outbursts, T Coronae succeeded in at least partially rebuilding the bloated atmosphere, for the color displayed was often very red.

A nova outburst does not seem to be a major catastrophe in the life of the star. In most cases the star recovers and may prepare for another relapse in the near— or distant—future. Even a few thousand years is a short time in the life history of a star.

Most new stars have exploded only once within the memory of man. But it is quite possible that some of these may burst again.

The most famous of all novae is Tycho’s star, which outshone all but the planet Venus, in the year 1572. There were no telescopes then, and we do not know which of several faint stars in the vicinity may be the one Tycho observed. This outburst was so great that astronomers call it a supernova—a very rare phenomenon indeed. The explosion may have wrecked the star completely, so that we may not have a recurrence. But astronomers still watch, hopeful of seeing it again.

A variable star in Andromeda, Z Andromedae, shows signs of novalike activity and some day may flare into brilliance. Watch these places in the sky and you may some day see an unaccustomed star there. If you should see a nova, notify the nearest astronomical observatory by telegraph, as soon as you have checked that it is not just a planet. Those familiar with the sky can do a real service to astronomy and science by watching for and reporting new stars.

When one of these objects appears, astronomers all over the world train their telescopes upon it and take photographs and spectra (rainbow colors) in rapid succession.

The earlier stages are particularly important because we know least about them, and because the changes are most rapid.

The energy source of these tremendous explosions may well be some sort of nuclear reaction, different from, but none the less akin to, those in the atomic bomb. In ordinary stars the release of atomic energy appears to be well controlled, but in the novae the processes appear to get out of hand and the tremendous bursts occur.

Theoretical and observational studies of these- atom-star-bombs are important for scientific advance. The knowledge gained of gases at high temperature, the behavior of tremendous explosions and the conditions giving rise to them, may contribute to the problem of atomic power. It will certainly help us to understand a star’s constitution.