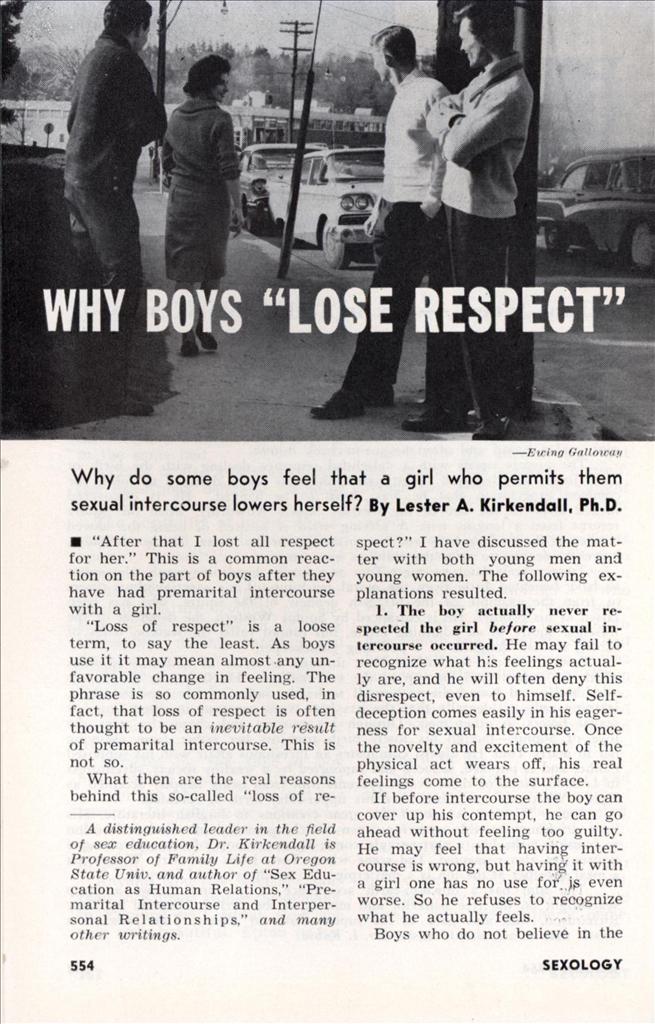 Why do some boys feel that a girl who permits them sexual intercourse lowers herself?

By Lester A. Kirkendall, Ph.D.

A distinguished leader in the field of sex education, Dr. Kirkendall is Professor of Family Life at Oregon State Univ. and author of “Sex Education as Human Relations,” “Premarital Intercourse and Interpersonal Relationships,” and many other writings.

“After that I lost all respect for her.” This is a common reaction on the part of boys after they have had premarital intercourse with a girl.

“Loss of respect” is a loose term, to say the least. As boys use it it may mean almost any unfavorable change in feeling. The phrase is so commonly used, in fact, that loss of respect is often thought to be an inevitable result of premarital intercourse. This is not so.

What then are the real reasons behind this so-called “loss of respect?” I have discussed the matter with both young men and young women. The following explanations resulted.

1. The boy actually never respected the girl before sexual intercourse occurred. He may fail to recognize what his feelings actually are, and he will often deny this disrespect, even to himself. Self-deception comes easily in his eagerness for sexual intercourse. Once the novelty and excitement of the physical act wears off, his real feelings come to the surface.

If before intercourse the boy can cover up his contempt, he can go ahead without feeling too guilty. He may feel that having intercourse is wrong, but having it with a girl one has no use for is even worse. So he refuses to recognize what he actually feels.

2. Sometimes disrespect is produced by lewd, coarse jests made by close male friends of the boy involved. Boys often regard sexual experience as evidence that they have reached manhood. This being so, they feel the need to tell other boys about it.

Even though the boy and girl may have respected each other, and behaved in a dignified way, boy friends are unlikely to treat their relationship that way. They are likely to see it as a salacious, exciting lark. It becomes very difficult for the boy to maintain his feelings of dignity when close friends begins to refer to his relationship with the girl in coarse, vulgar language.

Even though the boy opened the way for such comments from his friends by telling them about his relationship, he may still find his feelings changed by their remarks.

Sometimes the fact that a couple is having intercourse becomes general knowledge among their friends, and the couple knows this. The knowledge that others know certainly removes the sense of exclusiveness which the couple probably felt at first. They begin to fear that still others, perhaps their parents may find out. These fears in turn produce tensions, and out of them often come quarrels and loss of respect between the partners.

Unless the partners have a great amount of affection and a strong loyalty to each other, feelings of contempt are likely to build up as a defense against feelings of uneasiness and fear.

3. Some boys feel that in a secret, hidden sexual relationship the girl should be coy and resisting. She should require seduction on each association. If the girl abandons this role, and becomes enthusiastic, aggressive, or even seductive herself, she may very well be greeted with a feeling of disrespect on the part of her partner.

4. A girl may lose the respect of her male sexual partner through her use of sex slang or folk terms. As one boy put it, “I just can’t, stand a girl who is dirty-mouthed.” Yet his partner had spoken only in ordinary sexual slang.

He himself had used these terms in talking with the girl. There is a good chance that since he had used them she felt it was correct for her to use them also.

5. Once intercourse begins, girls often respond by becoming keenly interested in getting engaged or married. Girls involved in premarital intercourse are often quite insecure. To become engaged or to have the promise of marriage would provide a girl much needed security. So she begins to press for expressions of love, and to force the boy to commit himself. The boy, however, may be quite unready or quite unwilling for such an involvement.

As a consequence of this pressure the boy may lose interest in the relationship, find another girl, or for some other reason wish to be free. To “lose respect” for the girl provides him with an excellent excuse for ending the relationship without causing him to feel guilty.

6. Sometimes when her boyfriend begins to lose interest, the girl senses this. In order to keep him she may behave so as to create a lack of respect. She may have permitted or even encouraged intercourse to begin with as a way of promoting the relationship. She may now reason that since a stronger relationship did seem to result from intercourse, the way to revive interest is to make intercourse even more available. And so she becomes sexually aggressive.

Girls who behave this way are often criticized by the boys because “intercourse got to be all she thought about.” It is very easy for a naive, insecure girl to overplay her hand. It is just as easy for a boy who was never very deeply involved anyway to “lose respect.”

7. Some boys wan! exclusive possession of their sexual partners. A boy who holds this view may be tortured with the thought, “if she had intercourse with me, she would have it with someone else.” The girl herself, by what she says or does, may create and foster this suspicion. A flirtatious, provocative girl can easily do this, and her partner will quite likely respond with a growing feeling of contempt.

8. Breaking a relationship, particularly one in which there was some affection, is never easy. It is even harder when sexual intercourse has been a part of it. It is especially hard for young people who lack the courage to face reality, who are unskilled in dealing with tangled emotions and who are unable to speak frankly about sex.

As a result breaks are often made by roundabout methods and in dishonest ways. Lies, false fronts, and advantage-taking become a part of making the break.

In a situation such as this, to safeguard his own conscience a boy often “loses respect.” He is thus able to look back on what he has done with less guilt and disturbance than if he had “respected” the girl.

9. A “loss of respect” for the girl may be the boy’s reaction to a sexual relationship which failed to meet expectations. Inexperienced boys especially, often expect more in pleasure, thrill and excitement from sex than is possible. The sensory pleasure may be little, the girl may cry or otherwise create a problem, or the back seat of a car may prove an unsuitable place for a sexual relationship.

In other words, sex just didn’t live up to expectations. Intercourse was supposed to be the most satisfying of all intimacies; instead it produced tensions and hard feelings.

10. Loss of respect may be the to-be-expected outcome of managing sex by ritual. Since young people cannot talk freely about sex, they often conduct their sexual affairs in a stereotyped way. Thus, in petting the boy makes an advance, the girl resists, he tries again and gets a bit further before she stops him. One step leads to another. Both know what comes next, and both know they will end up with petting.

The girl may then cry to prove her virtue, and the ritual is completed. In such a relationship, when intercourse finally occurs the loss of respect by the boy may be as much a part of the ritual as pushing him away and crying is for the girls. The boy is expected to lose respect and he does.

Clearly a loss of respect for a girl by a boy who has engaged in premarital intercourse with her may arise from a number of causes. Their very number however, indicates how hard it is in our double-standard, sexually-confused culture to combine premarital intercourse with a pleasant, secure dating relationship. This is especially true when the partners are youthful and immature.