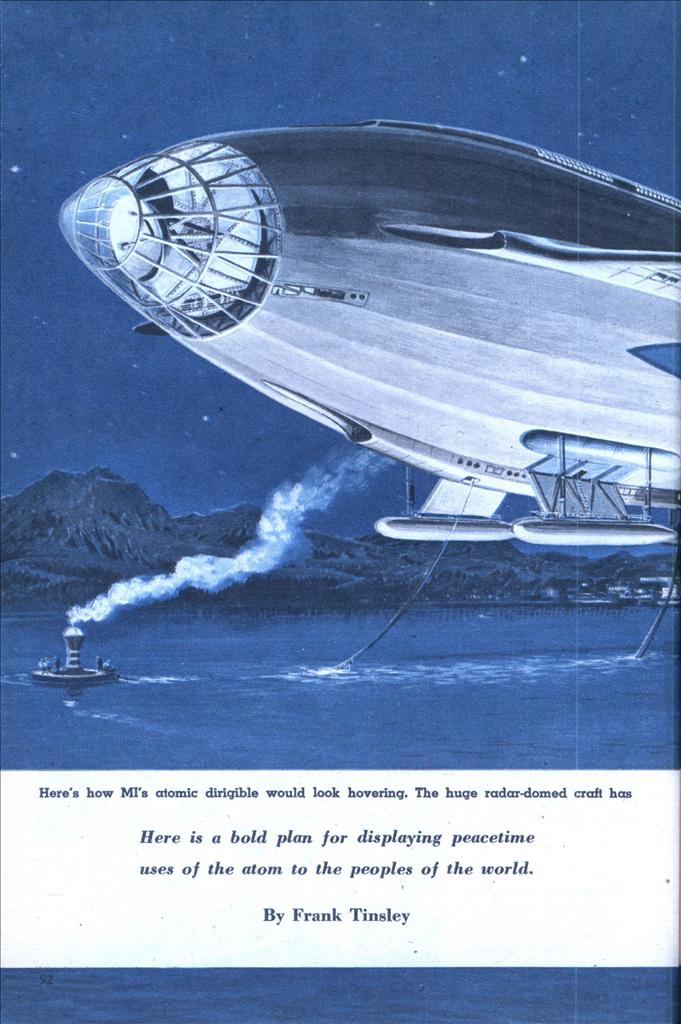 Why Don’t We Build An Atoms-For-Peace Dirigible

Here is a bold plan for displaying peacetime uses of the atom to the peoples of the world.

EARLY last year, President Eisenhower asked the Congress for funds with which to build a fission-powered merchant ship for the global spread of peaceful atomic knowledge.

“Visiting the ports of the world,” the President stated, “the ship will demonstrate to people everywhere the peacetime use of atomic energy, harnessed for the improvement of human living.”

In Washington, the basic idea of a floating exhibit of American fission techniques was received with general approval by members of the Congress. Some of the plan’s technical aspects, however, generated a bit of discussion. To avoid protracted experimental research and thus speed the ship launching date, it was originally decided to fit the vessel with a duplicate of the power plant used in the atomic submarine Nautilus. This notion was greeted with some misgivings. Atomic Energy Committee experts felt that we had already progressed well beyond the Nautilus installation and that a more advanced model was in order. The question before Congress, therefore, has been whether to blow 40 to 50 million dollars on an already obsolete “quickie” or to go slower and get a more advanced sample of our atomic progress sometime around 1959.

Like Congress, MI feels that this is no decision to make lightly. In fact, your editors have dug deep into the basic factors involved, asking themselves whether a ship, with its limited seaborne reach, is actually the most efficient carrier for Ike’s traveling atomic exhibit. The only alternative seemed to be some form of aircraft. After eliminating even the largest possible airplanes now in sight as incapable of carrying the necessary load, MI hit upon the idea of employing a huge dirigible as our angel of peace. Here are some of the reasons behind such a concept: Unlike a ship, the dirigible moves in an aerial ocean that completely envelops our globe. Hence, it can display its wares anywhere on the face of the earth. Seas, mountains and deserts present no barrier. Neither, considering its mission of peaceful education, should national frontiers.

A modern dirigible would be unique, the cynosure of all eyes. Unlike the ship, one-third of whose bulk is hidden by the water in which it rides, the dirigible discloses every inch of its dramatic size as it coasts along against the clear backdrop of the sky. The lower it flies, the more majestic it appears, as anyone who saw the Akron, Macon or Hindenburg will testify. No man-made vehicle has ever presented such an awe-inspiring spectacle as a giant airship breaking through a low-hanging cloud or cruising above the rooftops of a darkened city.

Its effect upon the peoples of the world would be many times more potent than that of an ordinary-looking, seaborne freighter. The fact that the dirigible, traveling at relatively low speeds and altitudes, a silvery giant by day and dramatically illuminated at night, will be visible to practically everyone en route, makes it the perfect Atoms-For-Peace transport. It can show our flag in every nook and corner of the globe, scattering as it goes messages of good will in every literate dialect.

MI’s proposal for an Atoms-For-Peace airship, calls for a continuation of airship development as pioneered by Zeppelin, Eckener and Arnstein, with the addition, wherever practicable, of modern materials and methods. Magnesium, titanium and strong, lightweight Fiberglas promise greater ruggedness and durability with less poundage. This improved weight-strength ratio opens new possibilities to the dirigible engineer. For instance, the single, bottom-keel structure, an outgrowth of age-old surface ship design, might be augmented by external side and top “keels,” containing additional passenger accommodations. These extra stiffeners would vastly strengthen the airship longitudinally without too great a weight penalty.

In place of the Akron and Macon pickup gear and airplane hangar, a modern helicopter landing pad and internal hangar deck might be installed atop the hull’s center section. Built in the form of a shock-absorbing elevator, the pad could lift the copter clear of the hull for take-off and after landing, lower it to the level of the protected hangar deck for the safe, comfortable unloading of passengers. This is merely a reversal of the earlier airplane setup with the added safety advantage that both copter and airship travel at the same speed. The copter could provide a ferry service en route and at points where it is inadvisable or impractical to land the airship.

Another possibility is the development of water landing gear. A seagoing dirigible, embodying a water-tight hull and lower gas bag, was recently publicized in Germany. MI feels, however, that retractable pontoons of inflated rubber would prove lighter and more efficient. They need not be large, as airships can be trimmed so as to be almost weightless. Water, pumped up from the surfaceâ€”using the hose gear long since perfectedâ€”would provide ballast to hold the ship down when anchored.

Due to the horsepower limitations of the early internal-combustion engines, dirigible designers have always had to install multiple power plants, scattered along the length of the ship. This has not proven too good an arrangement. In addition to difficulties in coordination, the propeller slip-streams have added to the skin friction of the hull with a consequent increase in drag. Modern research indicates that some form of dragless stern propulsion would better the airship’s efficiency and speed by as much as 15 per cent.

With this in mind, MI weighed the various power plant possibilities.

The final solution proved to be the easiest to apply and the one that offers the maximum advantages weight wise. This is a midship atomic steam plant using turbines to generate electricity. Comparatively lightweight wiring car ries the juice to the stern of the ship where an electric motor drives a huge, four-bladed, reversible propeller. To assist in landing and take-off maneuvers, ducted fans are mounted in gimbals in the forward and after stabilizers. These enable the skipper to move his ship up, down or at sidewise angles.

The fission plant is of the latest type, consisting of a central reactor contained within the core of a cylindrical heat-exchanger, the whole being enclosed in lightweight, laminated shielding. Its operation is simple. Steam, generated in the exchanger by the heat of fission, is ducted to twin turbine-generator installations set on either side of the reactor. Passing successively through high and low pressure turbines, the used steam is condensed and routed back to the heat exchanger in a closed system. The turbines drive twin generators and the electricity thus produced, passes into storage batteries. While heavier than a single installation, the duplicate turbine generators provide a safety factor, one being always available in the event of mechanical failure or repair work on the other.

This compact arrangement is mounted on a reinforced deck within the hull and may be readily reached from the exhibition hall directly below it. Galleries around the engine room permit visitors to inspect the unique plant without interference or danger to themselves. If the public exhibition is considered sufficiently important, a water shielded “fishbowl” type of reactor might be used. While heavier and less compact, it would provide a more impressive show.

The passenger accommodations of MI’s Atoms-For-Peace airship also differ from those of earlier dirigibles. As in the Hindenburg, the public rooms and promenade decks are sited in the lower hull and bottom keel. In addition, however, there is a brand new featureâ€” the exhibition hall, previously mentioned, that is incorporated in the center section of the keel. Fitted with an entrance and exit at either end, and filled with samples of peaceful atomic age technology, this section can be detached and lowered to the ground at various stops. Staffed with trained guides and attendants, it can be left at main population centers while the airship cruises over the country’s smaller towns and villages, showing the flag of good will. Just over 1,000 feet long, with 10 to 12 million feet of helium capacity and a 100-ton payload, MI’s atomic airship is half again as big as the Hindenburg and corresponds in size to a modern dirigible now on the Goodyear Aircraft Corp. drawing boards. In a letter to your editor commenting on this Atoms-For-Peace dirigible project, Dr. Karl Arnstein, former design chief for Count Von Zeppelin and his successor Dr. Hugo Eckener, and at present vice- president of the aircraft division of Goodyear, wrote: “Goodyear Aircraft engineers consider it an intriguing new approach to the Atoms-For-Peace program and think that the principle of taking the atom abroad via the airship is possible of technical accomplishment.” That experienced German dirigible experts think it is practical is evidenced by a recent proposal by Max Pruss, former captain of the Hindenburg. He urges the West German Government to build an atomic airship forthwith. “The dirigible will be the first to use the atomic engine,” he says, “because it is the only aircraft capable of carrying the weight.”

Here, then, is MI’s contribution toward the crusade. We believe such an airship to be entirely practical, safe and the best possible vehicle for the purpose. We earnestly petition President Eisenhower and the Congress to consider its merits.