The “fact” that the Northrop XP-79B was intended to ram enemy bombers is an urban legend as reported by serious aviation researchers. Click here.

Northrop always intended to outfit it with .50 caliber machine guns after the prototype stage. 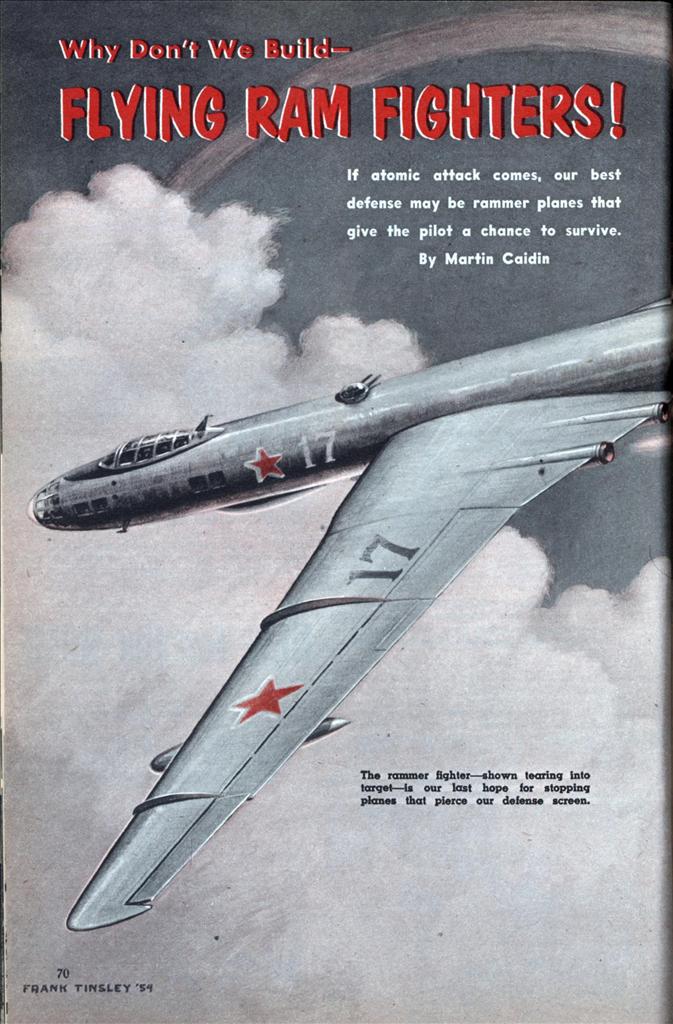 If atomic attack comes, our best defense may be rammer planes that give the pilot a chance to survive.

LET’S face it—the complete air defense of the United States is an impossibility.

Even with all-weather jet fighters armed with machine guns, rockets, and guided missiles; with rocket fighters; with unpiloted robot fighters; with supersonic rocket guided missiles; with radar picket ships and picket planes; with ground observers and a far-flung communications system, we can’t prevent a certain number of enemy atomic and hydrogen bombs from hitting our cities.

We can, however, reduce the final number of enemy bombers which will break through our defenses. Just eighteen months ago, our nation was so naked to enemy air assault that Senator Stuart Symington warned: “—our capability to stop these bombs runs from a high of 20 percent under ideal conditions, to a low of less than one-tenth of one percent at low altitude or at night.”

What has happened in the eighteen months since the Senator uttered his prophetic warning? Mechanix Illustrated is pleased to report that, while our air defense still has a long way to go before it can provide the protection our cities require, a great many of the enemy bombers which once could hit their targets will never get past America’s new aerial defense wall.

Since early 1953 your Air Force has added many hundreds of new and deadly jet interceptors to its air weapons system. All-weather interceptors such as the F-94C, F-89D, and the F-86D have electronic “eyes” which can ferret out the location of enemy raiders in darkness or in storm weather. The supersonic North American F-100 and Convair F-102 are in mass production. Our interceptors are fast discarding their obsolescent machine guns and cannon for air-to-air rockets which pack devastating power. Air-to-air guided missiles which “home” on enemy aircraft are fast rolling off production lines.

Nike guided missiles even now are being placed about our critical targets. Boeing’s F-99 Bomarc pilotless ramjet interceptor (see MI, August, 1954) is well into its development stage. New radar sites are springing up throughout Alaska and Canada. Long-range radar picket planes of the Air Force and the Navy patrol on 24-hour duty. And the Navy has received hundreds of new trans-sonic fighter planes.

Yet, with all these new, excellent weapons in our air defense system, too many enemy bombers still can get through to smash at our great factories and at our cities.

The perfect air defense is a pipe-dream; you can’t stop all the attacking planes of an enemy force. The idea is to stop so many that you bring the attrition rate of the enemy’s forces to forty, fifty, and, perhaps, even seventy percent of his attacking waves. Some bombs will get through, certainly, but the attrition rate can be made so costly that we can destroy the enemy’s ability to sustain attacks against us.

Our new air defense weapons are geared to more and more electronic complexity. The pilot is fast becoming a human servant of the myriad mechanical and electronic devices in his interceptor. In many respects the pilot has been altogether eliminated!

In today’s air war, electronics are a vital necessity. For electronics tie in together the many parts of the overall weapons defense system. A far-flung radar system, for example, is useless unless it has rockets and guns to back it up. And thousands of top-notch interceptors are useless unless they can be directed accurately to their targets.

A weapons system based on electronics, however, also is peculiarly vulnerable to what is known as jamming. It’s no secret that there exists today a method for rendering ineffective through jamming techniques our early-warning radar. Jamming means that the enemy, at the crucial time, can render our electronic eyes blind.

The more complex your defensive electronics system, the greater the danger of effective enemy jamming. The idea is not to become so completely dependent upon electronics that successful jamming will render our planes and guns “blind.”

Recently an old concept of aerial defense has been dusted off for possible reintroduction into our air defense system. For a while after World War II we were so dazzled by the idea of radar and electronically-controlled flight that everybody assumed that the pilot—the human factor —was on the way out. In a matter of years, cried the experts, all our planes would be fully automatic and the pilot would be as dead as the dodo.

But is this true? Let’s take a hypothetical air defense situation and see. We’ll assume that an enemy force of twenty bombers is trying to hit New York, Washington, and Philadelphia in a high-speed, high-altitude attack. Early-warning radar pinpoints the enemy bombers, and our planes successfully intercept the attackers.

The air battle is swift and sure. From a position beyond the range of enemy guns, each fighter launches four air-to-air missiles which “home” on the enemy planes. Not all the missiles hit their targets; enemy jamming impairs the aim of several. Then the fighters close in, launching swarms of powerful 2.75 inch rockets. In a few minutes all ammunition is expended, and sixteen bombers are destroyed.

Sixteen out of twenty! Why, that’s terrific! And we lost only three fighters. It’s wonderful news, a smashing victory.

Wait a moment—what about the remaining four bombers? They are closing in on their targets, and each plane carries either an atomic or a hydrogen bomb. One hydrogen bomb may kill over a million people and lay waste the heart of a great city.

What can the fighters do—now? They’ve expended their rockets and their missiles. But those bombers are still up there, getting closer every minute to the millions of helpless people on the ground.

There is only one thing to do. Ram!

Deliberate ramming may be the most effective means of achieving the highest kill ratio of enemy bombers. One single fighter already miles high in the cold, sparse air of the sub-stratosphere is worth a hundred planes on the ground. Why should the effectiveness of this one plane, once it has expended its ammunition, be altogether lost?

Remember—one bomber can wreck a city, and kill and injure millions of people.

The answer is that aerial ramming is not only a means of assuring destruction of enemy bombers, but that ramming techniques with today’s airplanes can be perfected while insuring a high degree of pilot survival! To most Americans the idea of plunging with a fighter plane into an enemy bomber is synonymous with suicide.

Actually, air ramming began back in 1914, when a rickety Russian biplane slammed into a German aircraft. Throughout the last war the Russians adopted the ramming technique when destruction of the enemy was vital. Red pilots lowered their undercarriage and tried to smash the control surfaces of enemy planes with their landing gear. A refinement of ramming saw Red fighters trailing long steel cables, with the Russians trying to snarl the cables in German propellers.

Deliberate air ramming is advisable mainly as a last resort technique. It is especially appealing in the light of the destructive capabilities of modern weapons. It is the only means of bomber destruction left to a fighter pilot whose ammunition is gone, or whose electronic gear may be jammed.

That’s why the pilot may be around for some time to come, despite the predictions of “experts.” Today we are in need of a weapon which cannot be neutralized electronically by the enemy; we need an aerial defense weapon which depends not upon the transistor and the vacuum tube alone, but upon the human brain and upon human skill.

The requirements for a successful air-rammer fighter are simple. They include a complete lack of dependence upon electronic devices, or armament, for close-in combat; high speed, with good maneuverability; adequate pilot protection; and an aircraft design which will remain flyable after sustaining collision with another aircraft.

It may come as a surprise to most readers, but a good many years ago the Air Force thought enough of the possibilities of air ramming to build and fly an experimental ramming fighter plane!

Known as the Northrop XP-79B Flying Ram, it was a twin jet-engine, flying-wing design, in which the pilot lay prone. The latter innovation was intended to allow the pilot to withstand better the grueling effects of high speed maneuvering. Most unusual feature of the plane was that it lacked armament of any kind, was built only to ram!

The changing international situation and advances in airborne armament and electronics eliminated the Flying Ram fighter. Today, however, we have come full circle and realize that there may be a dead-end in our total reliance upon electronics.

What ” about our futuristic flying-ram fighter? The deltawing design, already incorporated into the F-102 supersonic interceptor, the XFY-1, the XF2Y-1 and the XB-58 supersonic bomber, lends itself admirably to the ram design. The leading edges of the wings and the vertical fin can easily be armor-plated to insure rigidity of structure during and after ramming.

The air rammer emerges as a deltawing shape, with sharply sweptback leading edges. It would have one or two very powerful jet engines, with afterburners for sudden bursts of speed. Because of its extreme wing sweep-back, it would use rocket engines to climb to 60,000 feet within two or three minutes. In actual ramming operations, the pilot would sight through a periscopic slit. The pilot’s compartment, in the event he should strike a “solid” portion of the enemy aircraft, such as the engines, could be ejected from the ram fighter.

The ramming fighter, then, is essentially a small, short-range, armor-plated aircraft. Its design and construction entail no sharp deviation from conventional aircraft.

The ram fighter is basically a last-ditch aerial defender. It is the last crude but extremely effective means of destroying the enemy.

It may prove that, after all, the human pilot will still be around for many years to come. •