Mechanix Illustrated
Issue: Jun, 1953
Posted in: Automotive
5 Comments on Why Don’t We Have… CRASH-PROOF HIGHWAYS (Jun, 1953) 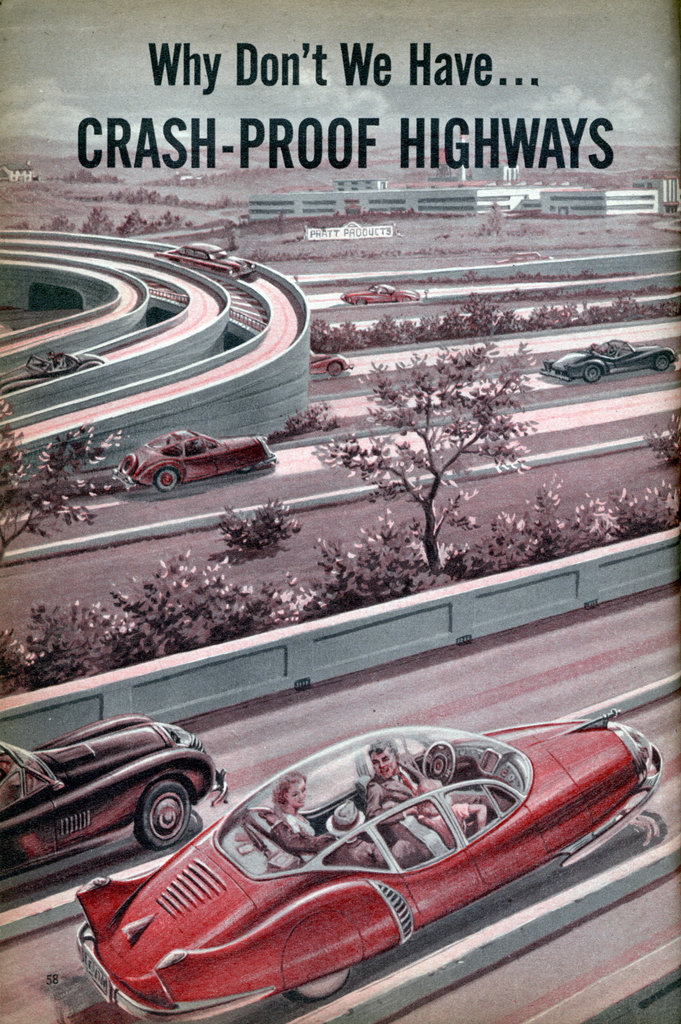 Why Don’t We Have… CRASH-PROOF HIGHWAYS

… with automatic pilots to take the wheel for trip-weary, accident-prone drivers.

If an inventor should offer the motorist an automatic pilot for his car, consider the tremendous safety value of such a device. The human element would be eliminated from driving. Our highways would become virtually crashproof.

Here is a system based on magnetic detectionâ€”(similar to that used to locate land mines in World War II) and radar, since it would be impractical to use radio beams as a means of directional control as with aircraft.

A ribbon of metallic material approximately 12 inches wide is located in the center of each highway lane and would have been incorporated in the highway concrete as it was poured.

The automatic pilot needs the following equipment: two magnetic detection units, a radar unit and an engine governor. This unit would work in conjunction with the car’s power steering and automatic transmission. The detection units would be mounted under the nose of the vehicle, one on each side of a horizontal line running lengthwise through the body. The narrow-beam parabolic reflector of the radar antenna, enclosed in a streamlined plastic housing, would be mounted on the roof or in the nose of the vehicle.

The car is put in motion in the conventional way and driven down the highway centered over the metallic ribbon. The auto-pilot is switched on and the magnetic detection units immediately begin reading the strength of the magnetic field surrounding the metallic ribbon in the pavement below. When the front center of the car is directly over the ribbon, signals transmitted to the power steering device from both detection units will cancel out and the wheels will remain straight.

However, should there be a turn in the pavement, the metallic ribbon will also follow the turn and the signal transmitted by one detection unit will increase while the signal from the other will decrease. This will actuate the power steering and the wheels will turn in the direction of the stronger detection signal until the car is centered over the ribbon once more. Having made the turn, the car will straighten out by the same process.

The degree of turning by the steering unit will depend upon the signal-strength increase transmitted by the detection unit.

The radar antenna transmits a narrow beam which constantly sweeps an area from one boundary of the vehicle lane to the other and continuous indication is obtained of all objects directly in the path of the car such as bridges, sharp curves, dips or obstacles in the road.

Let us assume, for example, that a cruising speed of 50 mph has been established and set up on the control panel. The engine governor will maintain this speed by increasing or decreasing the amount of gas being fed to the engine in response to varying engine loads.

After cruising speed has been set on the control panel, changes in the speed are brought about only by the driver’s overriding of the auto-pilot or as the result of a signal from the radar unit.

Suddenly our car begins to overhaul a slow-moving truck. As soon as it reaches a certain distance from the truckâ€”a minimum safe distanceâ€”the signal received from the radar beam bouncing off the truck causes a warning buzzer to sound. In addition it causes the governor to slow the engine of the car to the speed needed to keep that distance.

To pass, the driver must over-ride the auto-pilot and control his car manually. When he is once more on-the-beam and his radar unit is silent, he can relax.

To turn off the highway, he must override his pilot once more.

Each hazard on the highway will have a small radio transmitter located near it. As the car approaches, the radar beam trips the radio transmitter causing it to emit directional coded signals which designate the safe speed for passage through the hazard. Upon receipt of these signals, our radar receiver again causes the engine governor to slow the car accordingly.

What a boon this system would be to bus drivers, truck drivers, salesmen and others who travel long distances! It would eliminate the strain and fatigue which make them accident-prone.

Recent advances in the printed radio circuits and the use of transistors instead of radio tubes would bring the size and cost of an auto-pilot down to a level where it would appeal to the general public.

Who knows how long it will be before we actually have such a gadgetâ€”and crash-proof highways!