Why Don’t We Have Moving Sidewalks for City Shopping (Sep, 1954) 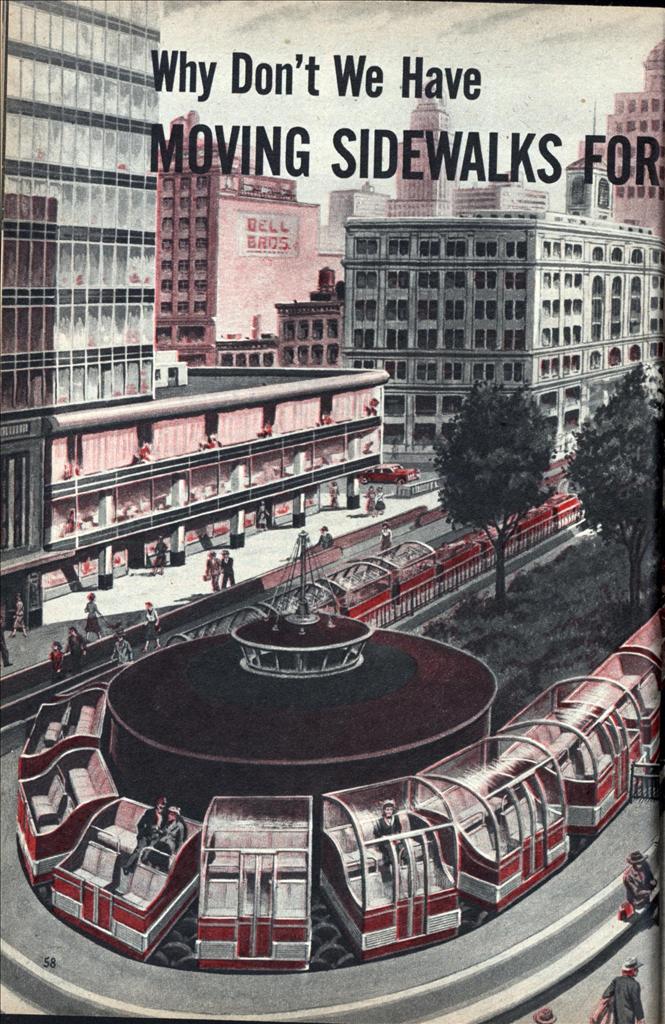 Why Don’t We Have Moving Sidewalks for City Shopping

No taxis, busses or private automobiles, alternately jamming up at street corners and darting ahead at the change of lights. No grinding gears, roaring motors or noxious exhaust fumes. No swarms of nervous pedestrians scurrying back and forth at dangerous intersections. Imagine, instead, a leafy-mall extending down the avenue’s center, green with trees and bushes, brightened with flowers and flanked by a continuous stream of comfortable public cars, flowing smoothly along on silent, rubber belts. In them, milady sits and window-shops at a leisurely pace, hopping on and off at any point she desires. Imagine, too, a pair of subsidiary moving sidewalks with safe, convenient entrances and exits, upon which the pedestrian may ride along at a normal walking pace or gain easy access to the faster-moving cars.

Does all this sound like a hashish smoker’s dream of a shopper’s paradise? Not to the hard-boiled engineers of Goodyear’s Conveyor-Belt Division with their long and impressive record of mass movement by endless belt. Their conveyors have carried coal, stone, ore, grain and just plain dirt in fantastic quantity and at notable savings over conventional means of transportation. The belts can climb grades as steep as 32 per cent; maximum for trucks is 10 and for railroads only three. They can glide over rugged terrain impassable for anything but helicopters or aerial tramways. They can traverse spider-web bridges too frail to support even a light truck and slip through rat-hole tunnels in which a normal man could not stand erect.

Rolling along at seven mph, the 36-in. wide conveyor can move nearly 20,000 tons of coal in a 24-hour day, or enough ore in a week to fill 5,700 gondola cars! And it can do all this at a fraction of the power expenditure required by any other method of transportation. The “rubber railroad” can be astonishingly gentle, too. Despite frequent transfer—dropping the load from one overlapping belt-end to the next—a test lot of two dozen eggs in ordinary cartons traveled 4.3 miles over a coal conveyor with 18 belt changes and at the end of the line only five of the eggs were cracked!

The operating economy of conveyor transit has been proved on the hard anvil of commercial competition. In building the great Shasta Dam, Henry Kaiser’s belt system beat the railroad bid to haul aggregate by seven-and-a-half cents per ton. It moved 12,000,000 tons of the stuff nearly ten miles for about 20 cents per ton and in four years this seemingly minor saving in price paid off the entire investment of $1,750,000! Other belts have proven equally economical at the Grand Coulee Dam operation, Kaiser’s mammoth cement plant in California and at coal mines and ore docks all over the world. In Seattle one of them levelled Denny Hill which squatted inconveniently between the business and residential areas, dumping it into Puget Sound at a handsome saving.

From conveyor-belt transport of ore, grain and other bulk materials to the mass movement of human beings is but a minor step. The basic engineering problems are the same with only minor modifications necessary. The fundamental principal of mechanical carriage is, of course, an old and’ accepted one. For many years, the endless belt has functioned safely and satisfactorily as an Escalator or moving stairway, lifting untold millions from floor to floor of our great department stores, depots, subways, etc. The new version, rechristened a “Speedwalk,” is nothing more than a simplified form of the old Escalator flattened out to run on the level. Various pilot models have been built and tested in recent years and the first commercial installation is now in actual operation. This connects the Jersey City stations of the Erie Railroad and the Hudson-Manhattan tubes, once infamous as a hot, heartbreaking bottleneck of daily commuter travel. Through the long, inclined tunnel, formerly called the “Cardiac Ramp” by weary suburban workers, there now runs a climbing sidewalk that wafts the rush-hour crowds from train to tube in effortless comfort. Designed by the Goodyear Industrial Products Division of Akron, Ohio, and the Stevens-Adamson Manufacturing Company of Aurora, Illinois, it transports as many as 10,800 persons per hour up and down the 10 per cent incline at about half the normal walking speed.

The Jersey City speedwalk is looked upon as the practical test installation for the far more elaborate “rubber shuttle” linking New York’s Grand Central and Times Square subway stations (see July ’53 MI), that will be built this coming winter. It is also a forerunner of a whole series of projected moving sidewalks that will ease the customers’ bunions at mile-long airports, railroad and bus terminals, supermarkets, stadiums, outsize parking lots, etc. Many of these are already in the blueprint stage and will soon be running.

Now that the man-carrying conveyor has come of age, even more elaborate projects are in the works. A second-story speed-walk has been designed to run from city parking garages, across busy street intersections and through adjoining hotels, stores, theatres and restaurants, in a loop encompassing a whole shopping center. Customers will leave their cars at the parking point, ascend an Escalator to the floor above and be carried effortlessly on their round of shopping or entertainment, safe from the dangers of street crossings and inclement weather. It will be the first completely mechanized and protected home-to-shop-to-home service.

There is no reason why the same idea should not be applied to street-level transportation, as well. Shown in the illustration oh pages 58 and 59 is Mi’s conception of New York’s Fifth Avenue of the future. In place of the present ‘ mess of slow-crawling automotive traffic is a continuous belt-borne line of small passenger cars, moving in endless procession around a landscaped mall which extends from 58th to 14th streets. Two car types are shown, open and covered. A convertible model could easily be designed also. Each contains nine seats, facing the store fronts and stepped up in bleacher style to permit comfortable, unimpeded window shopping.

Passengers can enter or leave the cars at any point via an adjoining speedwalk that travels at the same rate of speed-three mph. Through frequent entrance and exit strips they then step to a slower belt that moves at walking speed—1-1/2 mph. From this, easy access to the fixed sidewalk is possible. The shopper thus has a choice of normal strolling in either direction on static sidewalks; riding or “speed walking” in one direction on slow or fast conveyor belts, and finally, for longer distances, sitting in a three-mph car. The moving sidewalks run up one side of the avenue and down the other with overpasses every block or so for easy crossing. The proposed speedwalk set-up is purely local, designed to expedite pedestrian movement in concentrated shopping districts. Longdistance bus lines connect with the uptown and downtown ends and crosstown lines slip beneath it through underpasses. Side streets end at the avenue in traffic turnarounds, permitting the close approach of trucks, taxicabs and other surface vehicles. In an emergency, ambulances or fire apparatus can move up and down the avenue itself on the static sidewalks.

In large cities like New York, a series of similar conveyor-belt transportation systems, all connected together, could have still another advantage, especially if they went in two different directions. Since people would be able to go anywhere in the city Without using a bus, taxi or private car, congestion would be relieved all over, even on those streets and avenues that were open to regular traffic. Commuters’ cars might be parked in lots outside the city.

Goodyear engineers believe that the present bus, taxi and private-car traffic exists solely to move shoppers and strollers to stores and other establishments along our famous avenues and boulevards. The speedwalk system described would perform the same function far more cheaply, comfortably and efficiently’. It would rid our proudest thoroughfares of noise, fumes and traffic confusion. The method, materials and know-how lie ready to hand. Why don’t we put them to use and have modern moving sidewalks for our great shopping centers?