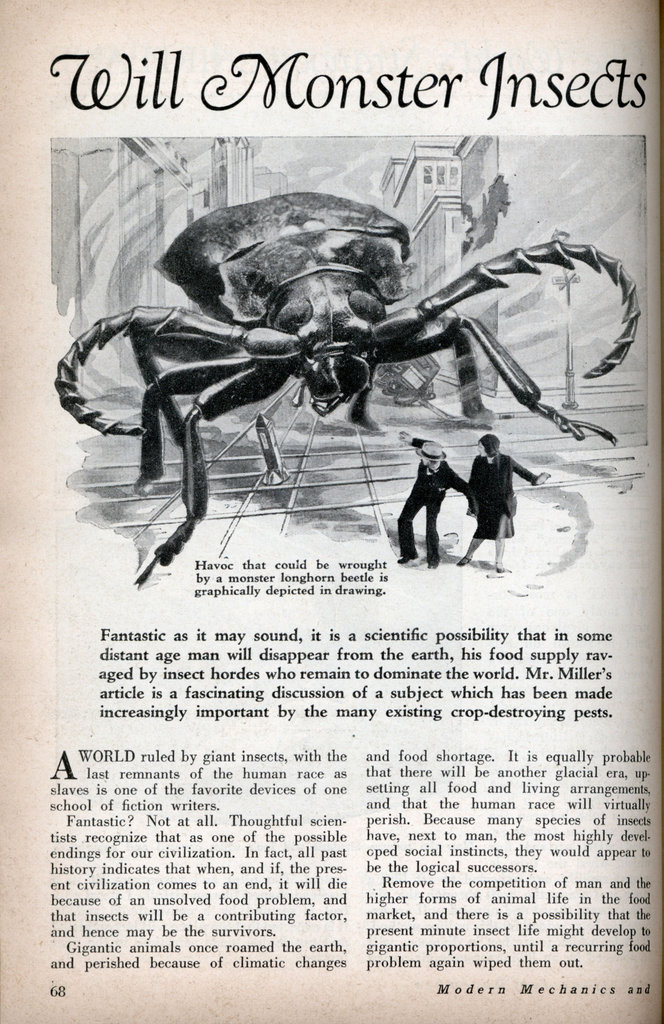 Will Monster Insects Rule the World?

Fantastic as it may sound, it is a scientific possibility that in some distant age man will disappear from the earth, his food supply ravaged by insect hordes who remain to dominate the world. Mr. Miller’s article is a fascinating discussion of a subject which has been made increasingly important by the many existing crop-destroying pests.

A WORLD ruled by giant insects, with the last remnants of the human race as slaves is one of the favorite devices of one school of fiction writers.

Fantastic? Not at all. Thoughtful scientists recognize that as one of the possible endings for our civilization. In fact, all past history indicates that when, and if, the present civilization comes to an end, it will die because of an unsolved food problem, and that insects will be a contributing factor, and hence may be the survivors.

Gigantic animals once roamed the earth, and perished because of climatic changes and food shortage. It is equally probable that there will be another glacial era, upsetting all food and living arrangements, and that the human race will virtually perish. Because many species of insects have, next to man, the most highly developed social instincts, they would appear to be the logical successors.

Remove the competition of man and the higher forms of animal life in the food market, and there is a possibility that the present minute insect life might develop to gigantic proportions, until a recurring food problem again wiped them out.

The importance of the food cycle has become increasingly apparent as science delves into the past history of the world. The Maya civilization, the highest developed in pre-his-toric America and rivaling the best that Egypt produced, disappeared because of food shortage. At their height the Mayas knew more about astronomy than Egypt, Greece or ancient Rome. In architecture, sculpture and painting they were equals of the old world, save for the single exception that they never learned to build a true arch, and had to rely on the corbel.

Six hundred years before the idea had occurred to philosophers in India, the Mayas invented zero. That doesn’t appear so important, at first glance, but without it all mathematical calculations would be hopelessly involved. Instead of learning nine numbers, and then repeating them over and over, we would have to learn a different name for every number. To count to one million you would have to know one million different words, and what each of them stood for.

Yet, despite their advanced culture, city after city of the Mayas was abandoned because the inhabitants, knowing nothing of cultivation and crop rotation, ate themselves out of house and home by exhausting the surrounding country.

Egypt, in Old Testament days, had a food and insect problem, until Joseph solved the periodical locust and water shortage crisis by inventing the modern system of food storage. Under his direction the Egyptians in six years of plenty laid up reserves for the seventh year, when the locusts reappeared and swept the harvest fields.

Rome fell largely because the Romans turned Italy into a region of vast country estates and pleasure palaces, and relied on overseas colonies for their food.

Recent scientific research has indicated that climate and food dictate the development of the race. The tropics, with a diet largely of fruits and vegetables, have produced a smaller, weaker race, maturing early and growing old physically at an early age. The north polar region, with a diet of fish, seals and whale blubber, likewise have produced a stunted race in the Eskimo, while the always present food shortage has limited it to a comparatively few thousand members. The whole North American region north of about 65 degrees doesn’t support more than 10,000 or 12,000 natives.

Only in the temperate zones, with a balanced ration of meats, fruits and vegetables, is found the big and husky type that reached its height in the Nordic race.

The food problem antedates even pre-historic man. Down in South America Professor Riggs, of the Field Museum of Natural History, discovered a vast valley fairly studded with the bones of extinct giants of the animal world. From the same plain he dug up bones of species that originated in Asia and species that developed near the southern tip of South America, probably at a time when the Antarctic continent, as the Byrd expedition recently discovered, was a tropical region.

The two groupsâ€”Asiatic monsters moving south and South American species moving northâ€”met in what Dr. Riggs has named the Valley of the Giants, and there they lay down side by side and died. Why?

Next to the food problem the biggest danger facing the human race is the possibility of having to change its diet, its climate, or its living conditions. It took centuries to develop the stamina of the human race to live under what we call modern civilization. Diseases incident to mass living had to be conquered by building up resistance to them. Yet if you introduce civilization to an Eskimo, or an Eskimo to civilization he probably will die of some childish disease like chickenpox or whooping cough, to which he has never been exposed in his native habitat. Civilized people, on the other hand, succumb wholesale to the diseases of dirt, to which the backward native is practically immune. A famous doctor announced the other day the startling discovery that maggots were useful in treating gangrene wounds because they would eat only the decayed and infected flesh, and so keep the wound clean.

But when Dr. Roy Chapman Andrews came home from his second Asiatic Expedition to the Gobi desert several years ago he told the writer that the Mongols in the Gobi had been using that same system for centuries, and were immune to all the usual diseases which civilization associates with dirt and squalor. Their resistance to filth was so high that, though practically all of them have the most dreaded venereal disease, they do not transmit it to their children, and it is seldom serious to adults.

Dr. Andrews told of treating a Mongol brigand who had been shot in the leg with an ancient blunderbuss loaded with nails and rusty scrap iron. When Andrews saw the patient, gangrene was so bad and the maggots so thick a giant syringe, used to treat sick camels, was necessary to wash the wound. Yet two days later Andrews met the patient riding his horse, well on the way to recovery.

Insects, particularly the so-called “social insects” with their highly organized communal life, appear to be practically free from disease, another reason why they may be the logical successors to humanity.

The social insects, which include all those which live together in well governed “city” nests, sharing under a communistic regime in the work necessary to support the whole nation, number thousands of species. Of 10,000 species of bees about 500 occupy common hives under one queen. Of approximately the same number of different species of wasps some 800 live in community nests. Then there are hundreds of species of Â¦ beetles, ants and termites in the social groups.

The bees, because they work for man in producing honey, are highly regarded and much has been written about their marvelous organization in the hive, yet the little known ants are far superior in their civilization.

Consider that under a matriarchal form of government they maintain a standing army of soldier ants to protect the city, a vast corps of workers to build and feed them all, a corps of nurses to take care of the young, that they maintain herds of cattleâ€” other types of insectsâ€”which they milk to augment the food supply, and that they are the only form of life aside from man that has ever imprisoned slaves to work for them.

As builders the ants, at least some species found in Africa, are far superior to man. The tallest man-made structure to dateâ€”the new Chrysler building in New Yorkâ€”is only some 1040 feet high, equivalent to the combined height of about 173 six-foot men. Yet ant nests, built by insects not over one-eighth of an inch high, often reach a height of 20 feet or more. That’s 1888 times the height of the builder, and to equal that, men would have to build more than two miles into the airâ€”11,328 feet, to be exact.

It has been remarked that ants, beetles and other insects often move objects many times as big as themselves, and weighing much more. They do other things equally marvelous. Take the road builders, for example. Unaided they clear and grade highways, which, in proportion to the size of the builders, equal anything that man himself has done with modern machinery. The common names of some of the many ant species indicate some of the many things for which they are remarkable. There are bakers, beggars, brood-stealers, carpenters, coopers, diggers, gardeners, gipsies, grain gatherers, guests, harvesters, highwaymen, honey makers, jumpers, leaf-cutters, masons, milkmaids, miners, mushroom growers, nomads, nurses, paper makers, paper workers, robber barons, robber guests, roofers, slave holders, soldiers, sowers, spinners, tapestry hangers, termite hunters, thieves, vegetable growers, and wood cuttersâ€”the name in each case indicating the task the species or group does the best.

The robber guests, as described by Dr. Hans Ewers, the famous German naturalist, live something like ancient robber barons. They first attack the nest of another species, kill the queen and soldiers, and then rear the brood as slaves. As soon as the young brood is grown it takes over the feeding of the robber guests, and the care of the master’s children. Instead of raising workers only, however, the robbers raise slave queens to perpetuate the slave population. Once the community is organized and doing well, the robbers settle down to spend the rest of their lives eating and holding games and athletic contests.

Society, in fact, is so well organized in antdom that it is not remarkable that the great Bismarck once said: “If I had to choose the form I would rather live in again, I think it would be as an ant. Just see: this little creature lives under a perfect political organization. All ants are obliged to labor, to lead a useful life; all are industrious, and perfect subordination prevails, with discipline and order. They are happy because they work.”

Bismarck, apparently, had never heard of the guest ants who neither toil nor spin.