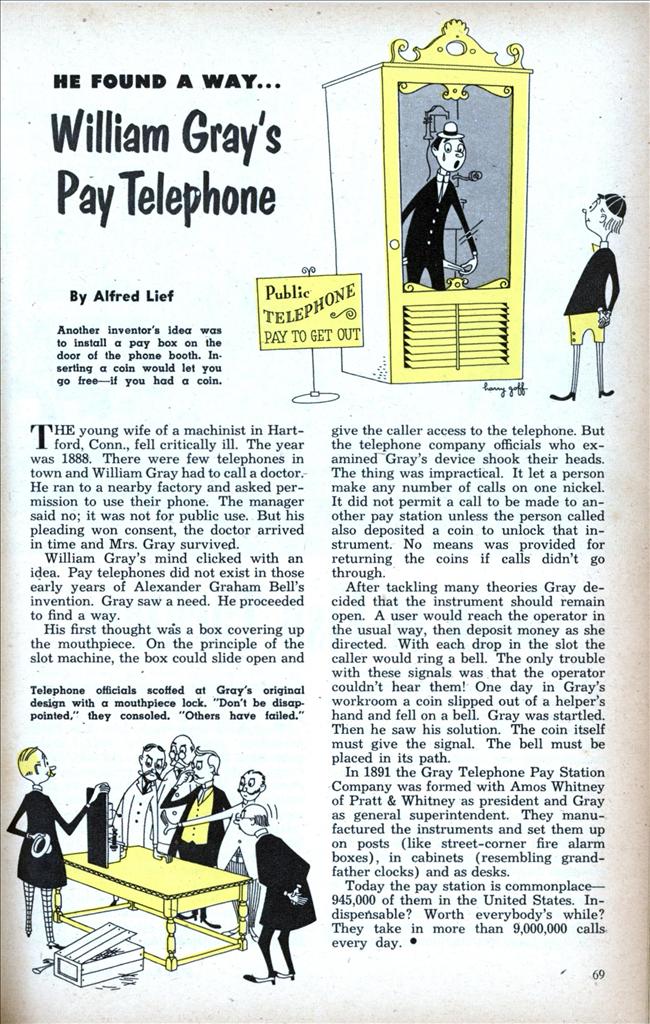 THE young wife of a machinist in Hartford, Conn., fell critically ill. The year was 1888. There were few telephones in town and William Gray had to call a doctor. He ran to a nearby factory and asked permission to use their phone. The manager said no; it was not for public use. But his pleading won consent, the doctor arrived in time and Mrs. Gray survived.

William Gray’s mind clicked with an idea. Pay telephones did not exist in those early years of Alexander Graham Bell’s invention. Gray saw a need. He proceeded to find a way.

His first thought was a box covering up the mouthpiece. On the principle of the slot machine, the box could slide open and

give the caller access to the telephone. But the telephone company officials who examined Gray’s device shook their heads. The thing was impractical. It let a person make any number of calls on one nickel. It did not permit a call to be made to another pay station unless the person called also deposited a coin to unlock that instrument. No means was provided for returning the coins if calls didn’t go through.

After tackling many theories Gray decided that the instrument should remain open. A user would reach the operator in the usual way, then deposit money as she directed. With each drop in the slot the caller would ring a bell. The only trouble with these signals was that the operator couldn’t hear them! One day in Gray’s workroom a coin slipped out of a helper’s hand and fell on a bell. Gray was startled. Then he saw his solution. The coin itself must give the signal. The bell must be placed in its path.

In 1891 the Gray Telephone Pay Station Company was formed with Amos Whitney of Pratt & Whitney as president and Gray as general superintendent. They manufactured the instruments and set them up on posts (like street-corner fire alarm boxes), in cabinets (resembling grandfather clocks) and as desks.

Today the pay station is commonplace— 945,000 of them in the United States. Indispensable? Worth everybody’s while? They take in more than 9,000,000 calls every day.