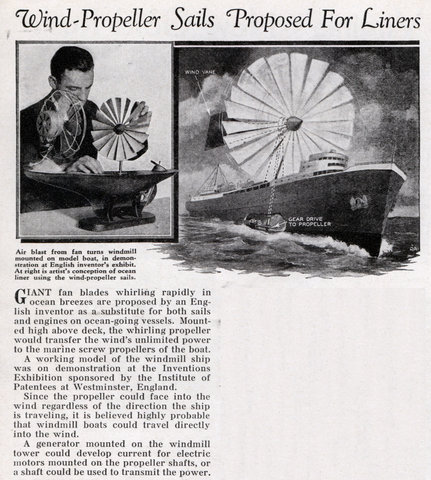 GIANT fan blades whirling rapidly in ocean breezes are proposed by an English inventor as a substitute for both sails and engines on ocean-going vessels. Mounted high above deck, the whirling propeller would transfer the wind’s unlimited power to the marine screw propellers of the boat.

A working model of the windmill ship was on demonstration at the Inventions Exhibition sponsored by the Institute of Patentees at Westminster, England.

Since the propeller could face into the wind regardless of the direction the ship is traveling, it is believed highly probable that windmill boats could travel directly into the wind.

A generator mounted on the windmill tower could develop current for electric motors mounted on the propeller shafts, or a shaft could be used to transmit the power.