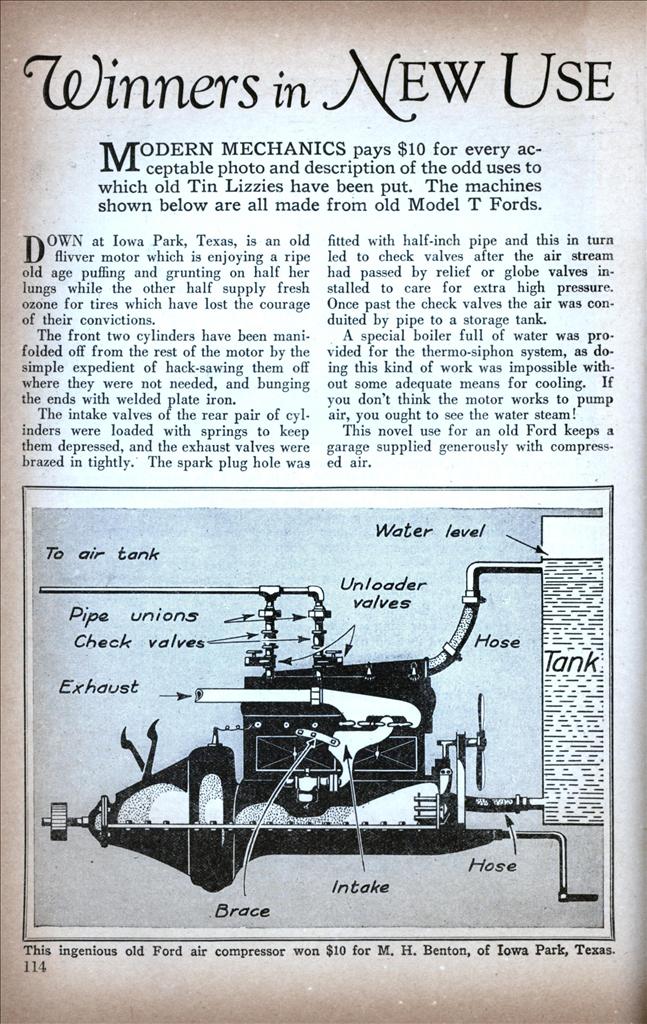 Winners in NEW USE for Old Fords Contest

MODERN MECHANICS pays $10 for every acceptable photo and description of the odd uses to which old Tin Lizzies have been put. The machines shown below are all made from old Model T Fords.

DOWN at Iowa Park, Texas, is an old flivver motor which is enjoying a ripe old age puffing and grunting on half her lungs while the other half supply fresh ozone for tires which have lost the courage of their convictions.

The front two cylinders have been manifolded off from the rest of the motor by the simple expedient of hack-sawing them off where they were not needed, and bunging the ends with welded plate iron.

The intake valves of the rear pair of cylinders were loaded with springs to keep them depressed, and the exhaust valves were brazed in tightly. The spark plug hole was fitted with half-inch pipe and this in turn led to check valves after the air stream had passed by relief or globe valves installed to care for extra high pressure. Once past the check valves the air was conduced by pipe to a storage tank.

A special boiler full of water was provided for the thermo-siphon system, as doing this kind of work was impossible without some adequate means for cooling. If you don’t think the motor works to pump air, you ought to see the water steam!

This novel use for an old Ford keeps a garage supplied generously with compressed air.

HYBRID STEAM ROLLER OWES ANCESTRY TO HENRY MR. G. H. DACY, one of our readers who lives in Maryland, sends us these two views of crazy but useful wrinkles for making use of old Ford car carcasses.

Down at Augusta, Georgia, there is a country club which has extensive acres of greensward running east- ward from the piazza of the club house. To keep the grass in good condition it is necessary to roll it. These rollers, one of which is shown in the accompanying shot, were made from old Elizabeths of the vintage of Model T. Six were made at the cost of one ordinary tractor. The conversion is a simple one and the machine performs satisfactorily.

SERVICEABLE TRACTOR MADE FROM TIN ELIZABETH ANOTHER Maryland tinkerer put the elements of a tractor around his faithful old brass radiatored Ford. Equipped with sunshades, with gas tank out afront, this flivver is now doing hearty, willing work pulling a disc drag. It is said to be able to pull a “single bottom”—that is, a single plow, with comparative ease. The reader will note that the usual Ford rear axle and housing, together with the usual single spring, are employed to drive the machine. The auto wheels are removed, the frame with the bull wheels put on, and gears intermeshed with the big gear by use of small spur gears on the regular axle.