Not quite the same thing, but you can certainly see the seeds of modern blogging: news, politics, political organizing, gossip, and online hookups. 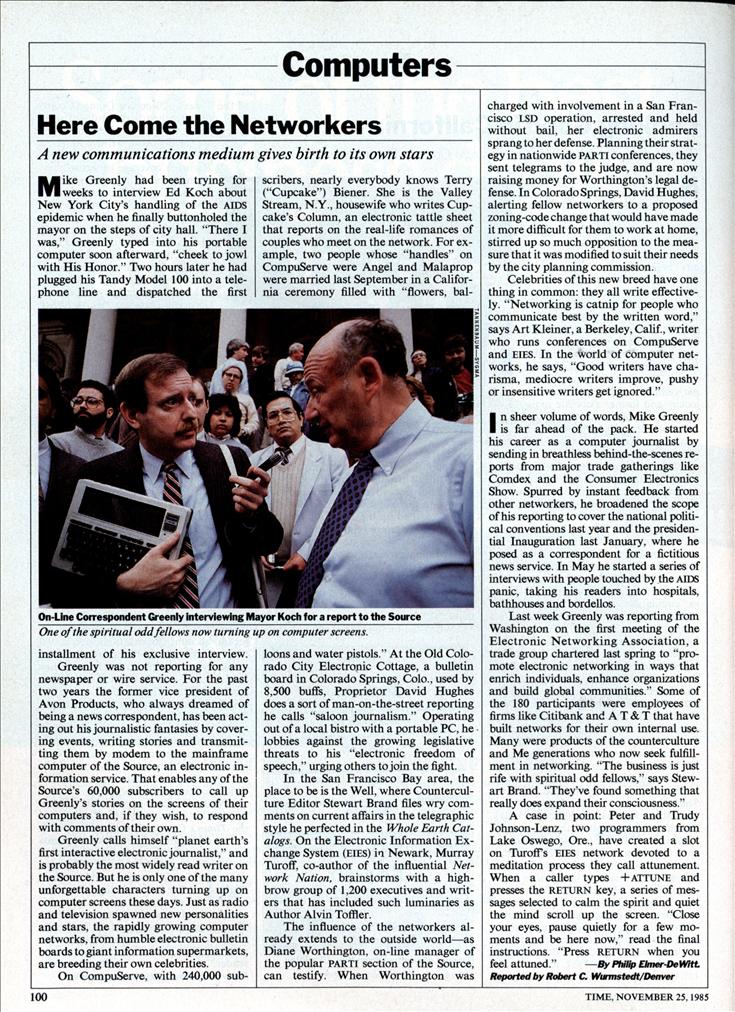 A new communications medium gives birth to its own stars ike Greenly had been trying for weeks to interview Ed Koch about New York City’s handling of the AIDS epidemic when he finally buttonholed the mayor on the steps of city hall. “There I was,” Greenly typed into his portable computer soon afterward, “cheek to jowl with His Honor.” Two hours later he had plugged his Tandy Model 100 into a telephone line and dispatched the first installment of his exclusive interview.

Greenly was not reporting for any newspaper or wire service. For the past two years the former vice president of Avon Products, who always dreamed of being a news correspondent, has been acting out his journalistic fantasies by covering events, writing stories and transmitting them by modem to the mainframe computer of the Source, an electronic information service. That enables any of the Source’s 60,000 subscribers to call up Greenly’s stories on the screens of their computers and, if they wish, to respond with comments of their own.

Greenly calls himself “planet earth’s first interactive electronic journalist,” and is probably the most widely read writer on the Source. But he is only one of the many unforgettable characters turning up on computer screens these days. Just as radio and television spawned new personalities and stars, the rapidly growing computer networks, from humble electronic bulletin boards to giant information supermarkets, are breeding their own celebrities.

On CompuServe, with 240,000 subscribers, nearly everybody knows Terry (“Cupcake”) Biener. She is the Valley Stream, N.Y., housewife who writes Cupcake’s Column, an electronic tattle sheet that reports on the real-life romances of couples who meet on the network. For example, two people whose “handles” on CompuServe were Angel and Malaprop were married last September in a California ceremony filled with “flowers, bal- loons and water pistols” At the Old Colorado City Electronic Cottage, a bulletin board in Colorado Springs, Colo., used by 8,500 buffs, Proprietor David Hughes does a sort of man-on-the-street reporting he calls “saloon journalism.” Operating out of a local bistro with a portable PC, he lobbies against the growing legislative threats to his “electronic freedom of speech,” urging others to join the fight.

In the San Francisco Bay area, the place to be is the Well, where Counterculture Editor Stewart Brand files wry comments on current affairs in the telegraphic style he perfected in the Whole Earth Catalogs. On the Electronic Information Exchange System (EIES) in Newark, Murray Turoff, co-author of the influential Network Nation, brainstorms with a highbrow group of 1,200 executives and writers that has included such luminaries as Author Alvin Toffler.

The influence of the networkers already extends to the outside world—as Diane Worthington, on-line manager of the popular PARTI section of the Source, can testify. When Worthington was charged with involvement in a San Francisco LSD operation, arrested and held without bail, her electronic admirers sprang to her defense. Planning their strategy in nationwide PARTI conferences, they sent telegrams to the judge, and are now raising money for Worthington’s legal defense. In Colorado Springs, David Hughes, alerting fellow networkers to a proposed zoning-code change that would have made it more difficult for them to work at home, stirred up so much opposition to the measure that it was modified to suit their needs by the city planning commission.

Celebrities of this new breed have one thing in common: they all write effectively. “Networking is catnip for people who communicate best by the written word,” says Art Kleiner, a Berkeley, Calif., writer who runs conferences on CompuServe and EIES. In the world of computer networks, he says, “Good writers have charisma, mediocre writers improve, pushy or insensitive writers get ignored.”

In sheer volume of words, Mike Greenly is far ahead of the pack. He started his career as a computer journalist by sending in breathless behind-the-scenes reports from major trade gatherings like Comdex and the Consumer Electronics Show. Spurred by instant feedback from other networkers, he broadened the scope of his reporting to cover the national political conventions last year and the presidential Inauguration last January, where he posed as a correspondent for a fictitious news service. In May he started a series of interviews with people touched by the AIDS panic, taking his readers into hospitals, bathhouses and bordellos.

Last week Greenly was reporting from Washington on the first meeting of the Electronic Networking Association, a trade group chartered last spring to “promote electronic networking in ways that enrich individuals, enhance organizations and build global communities.” Some of the 180 participants were employees of firms like Citibank and AT&T that have built networks for their own internal use. Many were products of the counterculture and Me generations who now seek fulfillment in networking. “The business is just rife with spiritual odd fellows,” says Stewart Brand. “They’ve found something that really does expand their consciousness.”

A case in point: Peter and Trudy Johnson-Lenz, two programmers from Lake Oswego, Ore., have created a slot on Turoff’s EIES network devoted to a meditation process they call attunement. When a caller types 4- ATTUNE and presses the RETURN key, a series of messages selected to calm the spirit and quiet the mind scroll up the screen. “Close your eyes, pause quietly for a few moments and be here now,” read the final instructions. “Press RETURN when you feel attuned.” —By Philip Elmer-DeWrtt Reported by Robert C. Wurmstedt/Denver