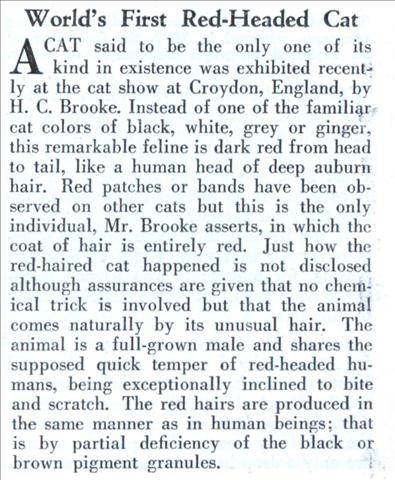 A CAT said to be the only one of its kind in existence was exhibited recently at the cat show at Croydon, England, by H. C. Brooke. Instead of one of the familiar cat colors of black, white, grey or ginger, this remarkable feline is dark red from head to tail, like a human head of deep auburn hair. Red patches or bands have been observed on other cats but this is the only individual, Mr. Brooke asserts, in which the coat of hair is entirely red. Just how the red-haired cat happened is not disclosed although assurances are given that no chemical trick is involved but that the animal comes naturally by its unusual hair. The animal is a full-grown male and shares the supposed quick temper of red-headed humans, being exceptionally inclined to bite and scratch. The red hairs are produced in the same manner as in human beings; that is by partial deficiency of the black or brown pigment granules.