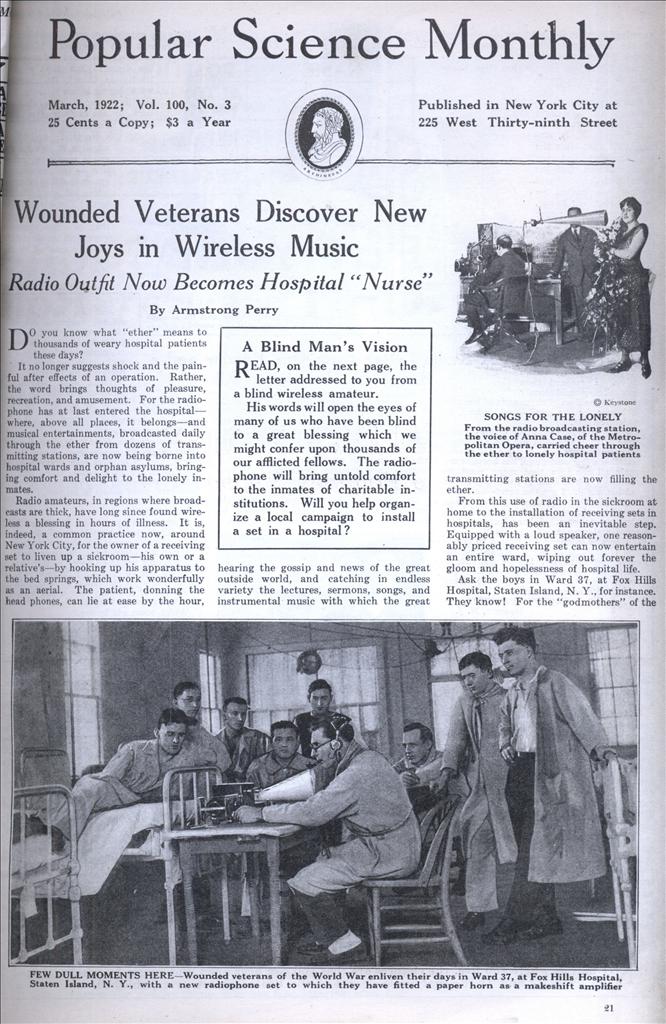 Radio amateurs, in regions where broadcasts are thick, have long since found wireless a blessing in hours of illness. It is, indeed, a common practice now, around New York City, for the owner of a receiving set to liven up a sickroom—his own or a relative’s—by hooking up his apparatus to the bed springs, which work wonderfully as an aerial. The patient, donning the head phones, can lie at ease by the hour, hearing the gossip and news of the great outside world, and catching in endless variety the lectures, sermons, songs, and instrumental music with which the great transmitting stations are now filling the ether.

From this use of radio in the sickroom at home to the installation of receiving sets in hospitals, has been an inevitable step. Equipped with a loud speaker, one reasonably priced receiving set can now entertain an entire ward, wiping out forever the gloom and hopelessness of hospital life.

Ask the boys in Ward 37, at Fox Hills Hospital, Staten Island, N. Y., for instance. They know! For the “godmothers” of the twenty-five wounded soldiers in this ward of the great government institution on Staten Island gave their “boys” a radio set last Christmas. Since that time, there are few dull moments in the ward.

The boys began by receiving an elaborate Christmas program from the Newark, N. J., station. At that time the loud speaker had not been delivered, but the inmates of the ward and their visitors passed the receiver from ear to ear, and improvised a paper horn that made the songs and messages audible to an attentive group. This new interest in life, and the keen pleasure that the radiophone has brought the wounded veterans, is doing as much for their health as careful nursing.

In fact, in numerous instances radio is making it possible for the hospital staffs to give their patients something more than medical care. In one of the greatest army hospitals located in Washington, D. C., several hundred patients at a time have been entertained by one pleasant-voiced nurse, who reads magazines into the transmitter, tells stories, and sings or says the little cheering things that only a woman can say.

At other times during this second experiment, a phonograph was started in the central station. It was connected with a radiophone transmitter that changed the sound waves into radio waves. The radio waves swept over and through the hundred or more buildings that constitute the hospital. Wherever they encountered metal, they sent electric currents through it.

In a white iron bed a soldier snapped a little clip onto his bed spring, picked up an instrument that resembled a telephone receiver, and heard the music of the distant phonograph as distinctly as though the machine were playing beside his bed. The electric currents were changed back, by the radio receiver, into sounds he could enjoy.

Hospital authorities who see in this an example worthy of imitation — and experience proves that it is—may be interested in a technical fact. The inventor of the system discovered that he could transmit voice and music within the area covered by the hospital without using high frequency currents such as are required in ordinary radio work. The radio waves from his apparatus travel through space at the rate of less than 10,000 waves a second. Passing through the magnets of the receiver, they cause vibrations of the diaphragm slowly enough to be heard as sound by the human ear. The bed spring is the “aerial.” The body of the patient, quite unknown to him, serves as a “counterpoise,” and makes it unnecessary to have a ground connection.

The particular system to be used is not important. One large hospital may broadcast its own entertainment throughout all the buildings. Another, like Fox Hills, may have an ordinary receiving set equipped with a loud speaker that permits a roomful of patients to “listen-in” on the regular broadcasts now blanketing the nation.

The latter is the simplest and most promising plan. And everybody who knows the ordinary gloominess of life in great institutions will realize how completely it will cheer the dreary life of the patients.

A Radio Letter from One Reader and a Broadcast Message to All
Editor of popular Science monthly: When I lost my eyesight,. some months ago, I suddenly found myself deprived of the majority of pleasures that others enjoy. I realized then how dreary and lonely must be the lives of thousands of inmates of homes for the blind—and, indeed, of all institutions.

But to-day, despite my misfortune, I have a brilliant vision for the happiness of these people. A wireless telephone, installed a few weeks ago, has brought me again all the joys that mean most to mankind. I hear daily of the doings of the outside world. I get the news—national, international, political, every kind—even before people who are able to read it in their newspapers. I hear lectures, sermons, and concerts.

Hours of suffering are turned to ceaseless pleasure wherever a radiophone receiving set is at hand. Let me urge you to advocate the installation of receiving sets for the benefit of those confined to homes and charitable institutions.

“popular science monthly requires no urging in this cause. Founded fifty years ago by a famous blind scientist, E. L. Youmans, who contributed greatly to the development of science in America, the magazine feels a special sympathy for the blind. Moreover, POPULAR science MONTHLY believes that few marvels of applied science in all the magazine’s 50-year history have brought blessings to mankind exceeding the present promise of the wireless telephone.

We therefore raise the banner now for the extension of radiophone communication by popular demand to its maximum of utility.

And we ask public spirited readers in every city to start a local campaign for the installation of wireless receiving sets with loud speakers, in deserving institutions.

Think what this will mean to the shut-ins in orphanages, in homes for the aged or the blind, and in hospitals. It means that the walls of the institutions are extended to the limits of the earth, as the listeners hear concerts from New York, opera from Chicago, press messages from all over the world, church services from Pittsburgh, news from the local paper, music from many broadcasting stations—more entertainment, more points of interest, one is tempted to say, than the average healthy person enjoys.

Many newspapers, like the Newark, N. J., Call, the Detroit News, the Seattle Post-Intelligencer, are already sending out wireless broadcasts. In every town a newspaper might go a step further and take up this campaign for radio in hospitals and asylums. Three hundred subscriptions of a dollar each would completely equip one hospital.

Which town will be first?

Popular science Monthly stands behind the enterprise, ready to give all possible cooperation and information.