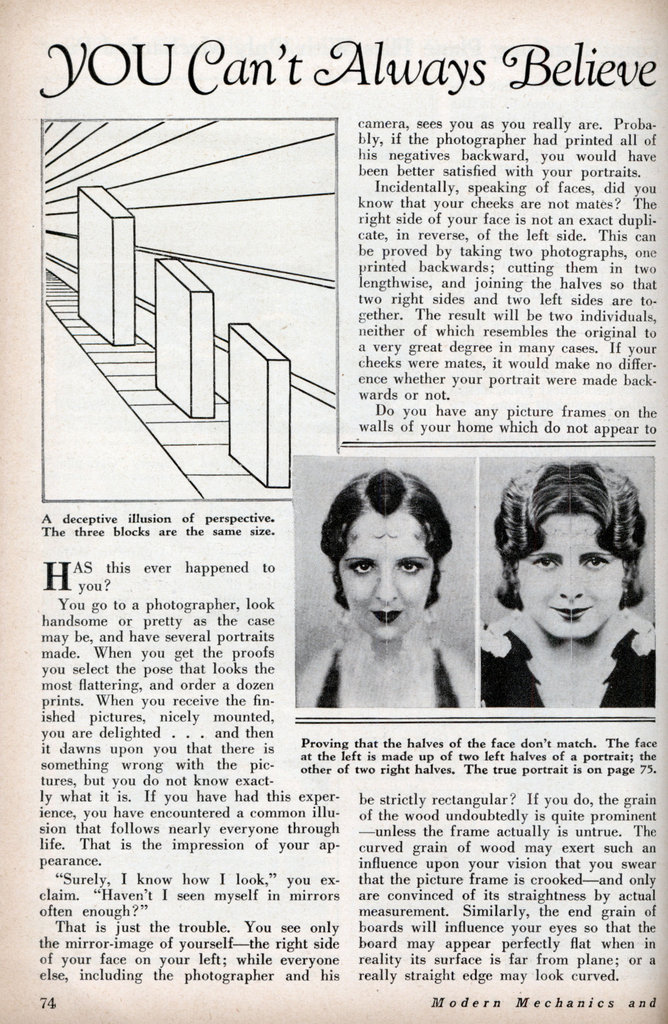 YOU Can’t Always Believe What You See

HAS this ever happened to you?

You go to a photographer, look handsome or pretty as the case may be, and have several portraits made. When you get the proofs you select the pose that looks the most flattering, and order a dozen prints. When you receive the finished pictures, nicely mounted, you are delighted . . . and then it dawns upon you that there is something wrong with the pictures, but you do not know exactly what it is. If you have had this experience, you have encountered a common illusion that follows nearly everyone through life. That is the impression of your appearance.

“Surely, I know how I look,” you exclaim. “Haven’t I seen myself in mirrors often enough?”

That is just the trouble. You see only the mirror-image of yourself—the right side of your face on your left; while everyone else, including the photographer and his be strictly rectangular? If you do, the grain of the wood undoubtedly is quite prominent —unless the frame actually is untrue. The curved grain of wood may exert such an influence upon your vision that you swear that the picture frame is crooked—and only are convinced of its straightness by actual measurement. Similarly, the end grain of boards will influence your eyes so that the board may appear perfectly flat when in reality its surface is far from plane; or a really straight edge may look curved.

Your impression of the length of lines is influenced by the position and dimensions of neighboring lines. For example, a line four inches long that is perpendicular to another line of the same length, and whose end joins this second line in the center, seems to be considerably longer. Similarly, a picture of a tower sometimes appears to be longer than it is wide, even though the length of the base line and the tower are the same.

If you are building a house, you can make use of perspective by lay- ing the roof shingles so that the exposed length is greater at the bottom than at the top, and gradually changes between the two extremes. Thus your roof seems to be much greater in expanse than it really is. In a like manner, a tower or office building of moderate height can be made to appear taller by making the height of its successive stories or sections decrease more rapidly than normal perspective requires.

Shifting attention is responsible for the effectiveness of designs often used in posters, quilts and other places where the eye is to be attracted. One of the most common of these “restless” designs is that consisting of rows of cubes which seem to change their arrangement with regularity. This effect is obtained because the eye sees the figures in first one and then the other of possible positions. In fact, you never look at any point steadily for any great length of time. Your attention is constantly shifting.

The next time you are out walking, you can try an interesting experiment with an illusion that often is noticeable in moving pictures. Carriage wheels in the movies sometimes appear to stand still or revolve backwards while the carriage or motor car proceeds forward. This is caused by the intermittent photographing of the wheel spokes in their same relative position. By watching a spoked wheel revolve while exhaling your breath forcibly so that your lips or tongue vibrate to such an extent that your eyes in turn are caused to vibrate, you can obtain the same effect. Sometimes, when walking, you will notice that automobile wheels apparently pause in their turning at the instant your foot strikes the ground. Here, again, jarring of your optical apparatus causes the illusion.

All of which goes to prove that you can’t always believe your eyes.