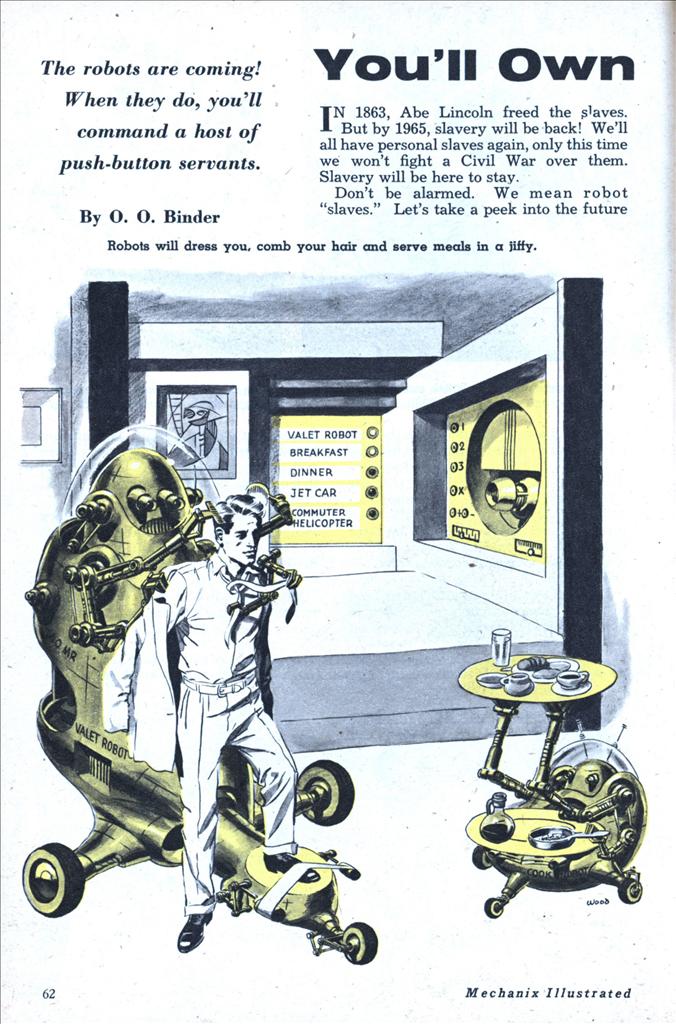 The robots are coming! When they do, you’ll command a host of push-button servants.

IN 1863, Abe Lincoln freed the slaves. But by 1965, slavery will be back! We’ll all have personal slaves again, only this time we won’t fight a Civil War over them. Slavery will be here to stay.

You are gently awakened by soft chimes from your robot clock, which also turns up the heat, switches on radio news and signals your robot valet, whom you’ve affectionately named “Jingles.” He turns on your shower, dries you with a blast of warm air, and runs an electric shaver over your stubble. Jingles helps you dress, tying your necktie perfectly and parting your hair within a millimeter of where you like it, Down in the kitchen, Steela, the robot cook, opens a door in her own alloy body and withdraws eggs, toast and coffee from her built-in stove. Then she dumps the dishes back in and you hear her internal dishwasher bubbling as you leave for the garage.

In your robot car you simply set a dial for your destination and relax. Your automatic auto does the restâ€”following a radar beam downtown, passing other cars, slowing down in speed zones, gently applying radar brakes when necessary, even gassing up when your tank is empty. You give a friendly wave to robot traffic cops who break up all traffic jams with electronic speed and perception. Suddenly you hear gun shots. A thief is emptying his gun at a robot cop, who just keeps coming, bullets bouncing from his steel chest. The panicky thug races away in his car but the robot cop shifts himself into eighth gear and overtakes the bandit’s car on foot.

If you work at an office, your robot secretary takes dictation on voice tapes and types internally at the same time, handing you your letter as soon as you say “yours truly.” If you go golfing, the secretary answers the phone, records any messages, and also delivers any prerecorded message of yours.

At home, your robot reciter reads books to you from your microfilm library. His eye can see microscopic prints. Or you play chess with a robot companion, matching your wits against an electronic brain.

In 1956 research scientists already devised robot game players who always won against human opponents. Of Â« â€¢ course the 1965 robots can be adjusted as you wish by buttons for high, average or low skill.

When a heavy snow falls you don’t have to shovel the walk. Neither does your robot caretaker. He merely sprays cheap atomic heat around the grounds, melting the snow as fast as it falls. Yours is a robot home, too, turning all day on a foundation turntable to enjoy the utmost benefits of the sun.

At bedtime, you snap on the robot guard who detects any burglars electronically. It’s a cheaper version of the robot alarm system in 1956, guarding precious documents like the original Constitution, in the National Archives Building.

During the night, no mice or rats can escape the super-sensitive ears and infra-red eyes of your roving robot cat. Back in 1956 scientists experimented with the first robot animals, such as the robot mole that could follow light beams, the robot moth dancing around flames and robot mice finding their way out of mazes.

Fanciful, this picture of the near future ? A foretaste of such robot wonders surround us today, most of them arising in the short decade since World War II. Besides the well-known electronic brains and automation machinery, robot devices are multiplying with a fecundity the human race never achieved. Atomic plants have installed amazing robot hands and arms that look like the creations of a “mad scientist” to handle deadly fissionable products.

Most remarkable is General Electric‘s new Yes-Man, a master-slave manipulator of incredible dexterity. Any movement the human master makes with his handsâ€”even lifting a fingerâ€”is faithfully duplicated by the powerful slave machine. In a fantastic demonstration, Yes-Man fixed a girl model’s hair-do and applied cosmetics, all with the gentle touch of a woman’s hand.

With suitable telephone and television circuits, master and slave can be thousands of miles apart. Thus a doctor in New York could perform an operation, via Yes-Man in Los Angeles!

But robots are becoming more versatile than being mere mechanical hands. The Hanford atomic plant now has a robot chemical analyzer which, like a dozen human chemists, extracts valuable traces of plutonium from nuclear wastes.

Datamatic Corporation has released the robot reader which records data and pictures on magnetic tape at the super speed of 100 inches a second. At this tremendous rate, a who library can be recorded in a few hours.

In national defense, robot radar “peers” 1,800 miles beyond our borders to guard against sneak attack. If it comes, robot missiles like the Nike rocket would seek out enemy bombers unerringly, even in fog or darkness. Robot anti-aircraft guns spot the enemy plane, determine speed and height, swing and open fire in split secondsâ€” all by themselves!

Robot drone planes serve for target practice. But on the drawing boards are pilotless robot fighter planes capable of supersonic jet maneuvers that would reduce human pilots to jelly.

The Army is now testing a robot scout plane whose TV-eye can scan enemy positions and transmit all it sees back to its base.

None of this amazes Dr. Norbert Wiener of MIT, the “Father of Cybernetics”â€”which is the academic term for all robot and automatic systems. It was two of his major mathematical concepts, some years ago, that led to the first electronic brains and all robot devices we know today.

Dr. Wiener himself enthusiastically prophesies a coming age of robot marvels undreamed of today. His far-reaching imagination foresees even robot psychiatrists, tabulating all the infinite fears and anxieties of the human patient, working out diagnosis and therapy in one short sitting.

In 1965 they may ask “Is there a robot doctor in the house?” Drug firms today Â¦ * use robot brains to name new products and juggle formulas for new wonder drugs. Planned are robot medics to sort out data and find miracle cures long before human minds can see them. Robot surgeons will eventually perform delicate major operations with tremor-less hands of superhuman skill and speed.

The personal “slaves” mentioned before have been forecast by Dr. Alfred N. Goldsmith, consulting engineer. He pictures a long series of “Electrobots” as our mechanical menials.

The space satellites going up in 1957 will carry an ingenious robot reporter, or telemetering system transmitting all the “space scoops” that will thrill the world.

The first “man” to reach the moon may well be a space robot, immune to flying-saucer speeds and radiations from the atomic rockets, ignoring the bitter cold and airless space, and able to survive any crash landing.

Criminology is turning to robot detectives, pinning down obscure clues unfailingly. No criminal mastermind will escape such a mechanical mastermind equal to a dozen Sherlocks.

Perhaps most inspirational is the idea proposed by Professor Ralph Meagher of the University of Illinois. He visions the government using a robot economist, robot financier, robot statistician, etc., to help promote the welfare of 170 million Americans.

Swiftly tabulating all national data such as supply and demand, unemployment, inflation or deflation, and the stock market, this robot brain trust will find the solution to nation-wide problems swiftly, where human experts take too long.

Dr. Wiener, the Father of Robotry, may not live to see this grand outcome of his cybernetic brainchildren. But in his own words there is “no limit” to what the Robot Age can bring.

One jarring thought comes up.

At the recent National Electronics Conference in Chicago, Curtis R. Schafer, project engineer for the Norden-Ketay Corp. warned that tiny radios placed in the brain may some day make possible the control and enslavement of entire nations. Schafer said the control of man himself may be the ultimate achievement of what is known as “bio-control.”

But the good seems to outweigh evil in the case of the robots and someone will probably come up with a robot worrier to put our minds at ease.

One thing is certainâ€”the robots are coming. The wonders of electronics will dominate every phase of our future life to make it more successful and pleasurable for everyone who lives on Earth.