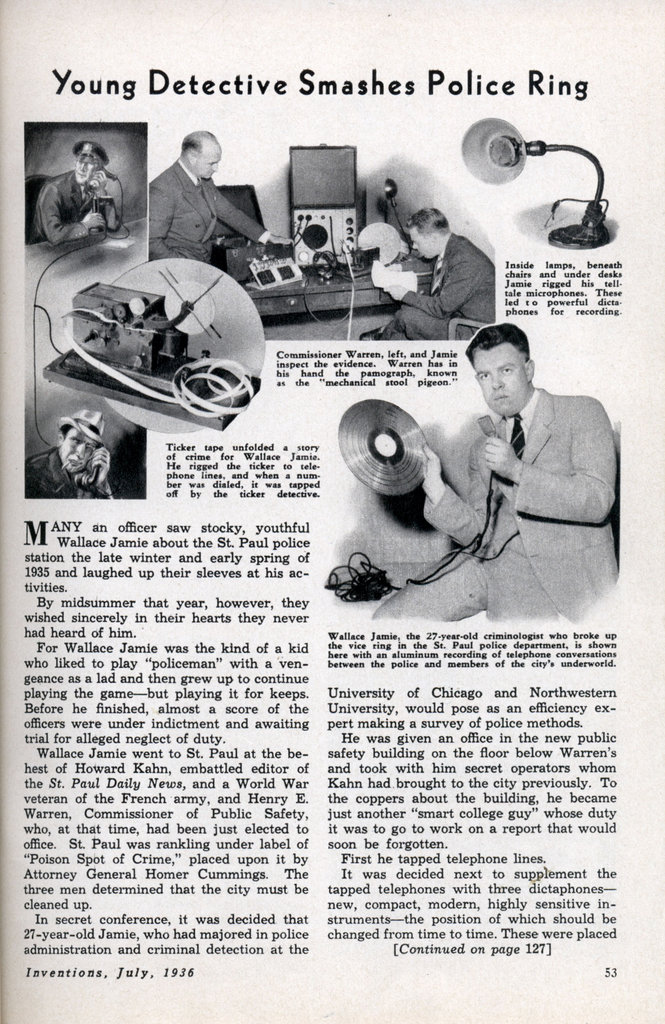 MANY an officer saw stocky, youthful Wallace Jamie about the St. Paul police station the late winter and early spring of 1935 and laughed up their sleeves at his activities.

By midsummer that year, however, they wished sincerely in their hearts they never had heard of him.

For Wallace Jamie was the kind of a kid who liked to play “policeman” with a vengeance as a lad and then grew up to continue playing the game—but playing it for keeps. Before he finished, almost a score of the officers were under indictment and awaiting trial for alleged neglect of duty.

Wallace Jamie went to St. Paul at the behest of Howard Kahn, embattled editor of the St. Paul Daily News, and a World War veteran of the French army, and Henry E. Warren, Commissioner of Public Safety, who, at that time, had been just elected to office. St. Paul was rankling under label of “Poison Spot of Crime,” placed upon it by Attorney General Homer Cummings. The three men determined that the city must be cleaned up.

In secret conference, it was decided that 27-year-old Jamie, who had majored in police administration and criminal detection at the University of Chicago and Northwestern University, would pose as an efficiency expert making a survey of police methods.

He was given an office in the new public safety building on the floor below Warren’s and took with him secret operators whom Kahn had brought to the city previously. To the coppers about the building, he became just another “smart college guy” whose duty it was to go to work on a report that would soon be forgotten.

It was decided next to supplement the tapped telephones with three dictaphones— new, compact, modern, highly sensitive instruments—the position of which should be changed from time to time. These were placed under desks, in desk lights, under chairs in which certain officials sat.

The method of listening to conversations and taking them down in shorthand soon proved cumbersome and slow. To be of any use later as evidence, the shorthand notes had to be transcribed, and this in itself was a herculean task. So Jamie went on a hunt for a short cut.

He found what he wanted in the pamograph, later to be known as the “mechanical stool-pigeon.” This machine, built like a portable phonograph, recorded conversations on an aluminum disk, cutting them deep into the metal with a sapphire needle. The tapped telephone lines and the dictaphones were rigged so that they could be switched to the pamograph in a moment’s notice.

Jamie naturally was acquainted with signal devices of all kinds used in public safety work and now he turned his attention to the apparatus used in fire department offices to punch out on continuous tapes the record of fire alarms sent in from alarm boxes.

Ticker Tape Records Telephone Numbers He set to work to fit one of these recorders to watch through the silent hours of the night in his office.

The regularity with which certain numbers were called led to undercover operations which served only to fashion more firmly the case Jamie was building up.

Janitor Tips Off Jamie’s Plot The tip-off came one day when a janitor was repairing a ventilating shaft leading to the office of a high police official. In the shaft was found one of Jamie’s high-powered dictaphones and the officials realized instantly what had been going on. But Jamie had been in operation for four months and had secured more than 400 disks of incriminating conversations. These were placed in the hands of the mayor, the city attorney and the county attorney, and immediately three detectives and a patrolman were dismissed and a number of other officers, including the chief of police, were suspended.

Jamie now came to his reward. In the resultant shakeup in the police department, he found himself made assistant commissioner, a post next to that held by Warren. Later he was invited to join the force of a large private detective firm in New York City at such a salary that he could not possibly turn it down.