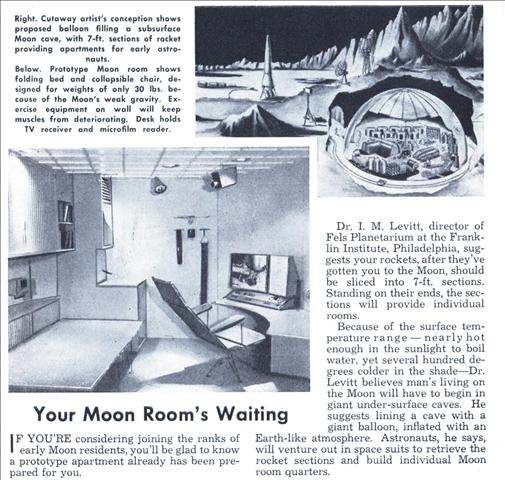 IF YOU’RE considering joining the ranks of early Moon residents, you’ll be glad to know a prototype apartment already has been prepared for you.
Dr. I. M. Levitt, director of Fels Planetarium at the Franklin Institute, Philadelphia, suggests your rockets, after they’ve gotten you to the Moon, should be sliced into 7-ft. sections. Standing on their ends, the sections will provide individual rooms.

Because of the surface temperature range — nearly hot enough in the sunlight to boil water, yet several hundred degrees colder in the shade—Dr. Levitt believes man’s living on the Moon will have to begin in giant under-surface caves. He suggests lining a cave with a giant balloon, inflated with an Earth-like atmosphere. Astronauts, he says, will venture out in space suits to retrieve the rocket sections and build individual Moon room quarters.