Mechanix Illustrated
Issue: Oct, 1956
Posted in: General
No Comments on Your Most Dangerous Times (Oct, 1956)

The illustrations make me think of an anti-depressant commercial. 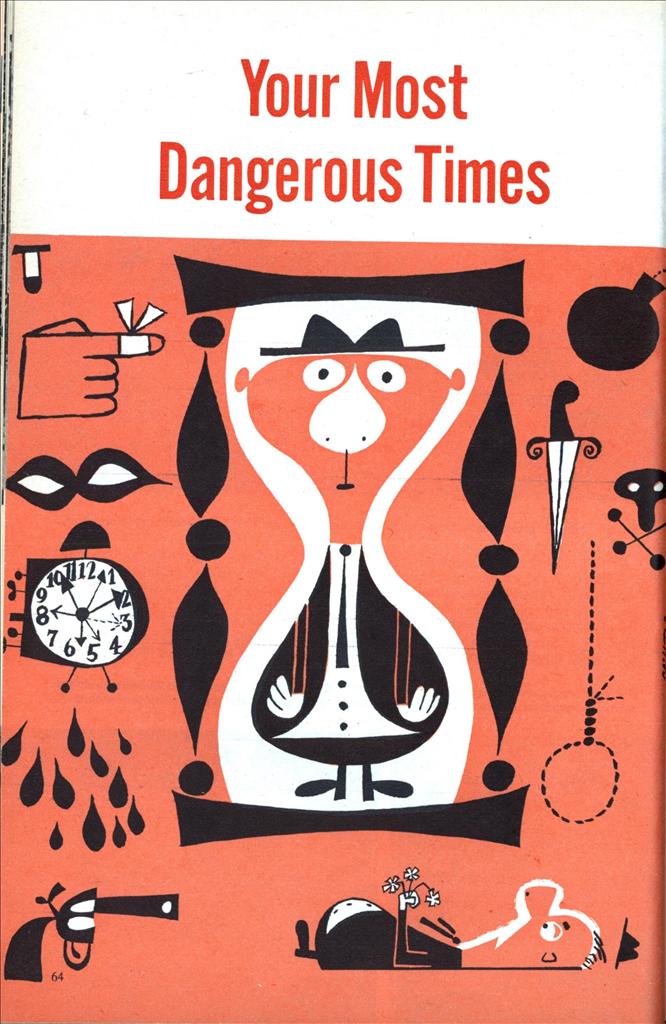 Your Most Dangerous Times

Be on your guard, for certain days, hours and months are more perilous than others.

SCIENTIFIC investigations are disclosing some astonishing information about your most dangerous—and safest—times. Studies by sociologists, public health experts, accident statisticians and other authorities are revealing that certain days, hours, months and seasons are more perilous than others.

One of the strange discoveries is that crimes against the person—murders and assorted kinds of aggravated assault— explode with greater frequency at almost specific times during the day, week or year.

Here are just a few danger spots which science has checked off on the clock and the calendar: Be especially careful at the shop or factory between 10 and 11 in the morning and 3 and 4 in the afternoon. Studies conducted all over the country, reports the National Safety Council, show conclusively that disabling injuries hit their peak then.

If you are not in the habit of locking your car, form the habit right now, particularly if you park it on the street between 8 and 10 in the evening. For some reason, not apparent to investigators, that’s when auto thieves make their biggest hauls.

If you know someone who is unusually depressed because of business, health, romantic or other troubles, it’s a good idea to stay with him as much as possible on Mondays and Tuesdays. Reason: the Harvard University School of Public Health surveyed countless cases of self-destruction and learned that these are the suicide days.

Murders, for some unaccountable reason, occur most often during the hot months of the year and slide to a low point in cooler weather. A recent issue of the Federal Bureau of Investigation’s Uniform Crime Reports asserts after an analysis of seasonal variations: “It is apparent that felonious assaults and murders occur with greatest frequency during the summer months and that crimes against property as a group show a tendency to increase during winter.”

Gerald J. Flak, a University of Pennsylvania sociologist, carefully studied ten annual police department reports from each of eight representative U.S. cities and came up with the most recent findings. Murders, he discovered, occur most often in July and dip to lows in March and April. July, too, is the worst month for criminal attacks on women, while cases dip in February. He disclosed that the hours of 10 to 12 p.m. are the worst for crimes against the person and that they start building up on Fridays, hit the peak on Saturdays, then ebb until they hit a low in mid-week.

If 10 to midnight is crime’s witching hour, Falk points out in his report published in the Journal Of Criminal Law, Criminology And Police Science, 6 to 8 in the morning is the safest time to be abroad. “The former time,” he explains, “is probably also the time when the heaviest drinking occurs, while the lat- ter time is probably the hour when the least use of alcohol may be expected.”

Investigators have discovered a strange similarity between crimes and political revolutions—the latter also burst out most often in the hot months! For example, Cesare Lombroso, an Italian scientist, charted 836 rebellions which broke out in various parts of the world between 1791 and 1880 and found summer was the preferred season.

Turn now to suicide and the startling fact learned by Harvard scientists that the most likely days for self-murder are Monday and Tuesday.

Rex Harrison, the movie star, entered the home of beautiful Carole Landis in Hollywood a few years ago and was shocked to find her body on a bathroom floor. It was 3 o’clock in the afternoon. Harrison promptly called police and Detective Capt. Emmett Jones, following an investigation, “called it death by suicide. She had been dead ten or 12 hours, he said. She had died on a Monday.

Hugh Casey, who enshrined himself with baseball’s immortals by his prodigious relief pitching for the Brooklyn Dodgers, was in a hotel in Atlanta, Ga., a few years ago, talking to his wife over i the phone. Casey was announcing his S determination to kill himself.

Suddenly there was a loud explosion over the wire, then a thud. When hotel employees broke into the room, they found Casey. He had fired a charge from a 16-gauge shotgun into his neck. The hour was 1 a. m. The date July 3, 1951—Tuesday.

It was also a few years ago that headlines the world over told the tragic news that Getulio Vargas, President of Brazil, had killed himself with a pistol shot through the heart after a series of battles with political opponents. At 8:30 a. m., the shot was heard. Officials who entered the bedroom found Vargas dead, a suicide. A calendar on the desk told the day. Tuesday.

There is a widespread belief that the majority of deaths come after midnight and before 6 a. m. Surprisingly, this is partially supported by statistical evi- dence. At the University of Marburg, two German physicians kept an accurate record of many thousands of deaths and the specific hours they happened. Their conclusions: The greatest number occurred in the early morning hours, the smallest in the middle of the day!

Dr. Rexford Hersey of the University of Pennsylvania has gone deeply into the subject of moods and discovered that all of us have a built-in emotional time clock which produces our ups and downs.

Some people have fairly short mood cycles, he learned, passing from the heights to the depths and back to the heights in two weeks. Others take as long as nine. On the average, Dr. Hersey discovered, the cycle for a normal adult consists of an extreme high period of about a week, a better than average period of about two weeks, a neutral feeling for several days and then the really low times which continue for about three or four days.

It’s possible, Dr. Hersey believes, to examine yourself and chart your moods. Then, if you have a fairly dependable idea of just when you will be feeling fine and when you will be down in the dumps, you can plan your activities accordingly. You won’t rush into important ventures when you are approaching a low—you will wait for the prime days to tackle the big things.

How about auto accidents? The Travelers Insurance Companies of Hartford, Conn., point out that in a recent year more fatalities were racked up between 6 and 7 p.m. than during any other hour of the day. As for injuries, they hit their peak two hours earlier, from 4 to 5 p.m.

Now travel is heaviest during two distinct times in an average day, from 7 to 10 a. m., when America goes to work, and 4 to 7 p.m., when we return home. From this, you would assume that each peak period would produce about the same number of accidents. You’re in for a shock. The figures show that more than twice as many accidents occur during the afternoon and evening hours as in the morning. Explains the Travelers companies: “At the end of the day, you’re tired. Unless you make up for duller reflexes with extra caution, you’re in danger. At the end of the day, your attitude is against you. Unless you deliberately curb your impatience, and your belligerence, you’re in danger. At day’s end, visibility is poor, especially during the winter months. Unless you slow up and stay well behind the car ahead, you’re in danger.”

How about days of the week? Weekends, of course, are the most dangerous to drive. Starting with Tuesday, when only about ten per cent of all accidents happen, the death and injury toll rises steadily through Wednesday, Thursday and Friday. From Friday afternoon until the small hours of Monday, says Travelers, “America’s streets and highways are a gory platform for half of the week’s casualties.”

According to the National Safety Council, there doesn’t seem to be any set pattern for accidental falls, poisonings and deaths by firearms—these occur in all seasons. But here are some other unique facts: Babies born in the month of August have the best chance of surviving to their first birthdays while December-born infants have the least. (Don’t worry about this, though. Most babies nowadays survive!) People born in February or early March up in New England can expect to live an average of three years longer than those who come into the world in the Summer in that region.

A number of researchers disclose that your sleep is deepest during the first hour, then lightens until 3 and 5 in the morning, when there is another deep period. Dr. James F. Bender, director of the National Institute for Human Relations, points out that burglars are well aware that slumber is soundest in the initial hour.

And one last phenomenon: The Foundation for the Study of Cycles points out that more people go crazy in the Summer than the Winter. Now it is an established fact that June is the big month tor marriages, but don’t go jumping to conclusions. Science says there is no connection! •