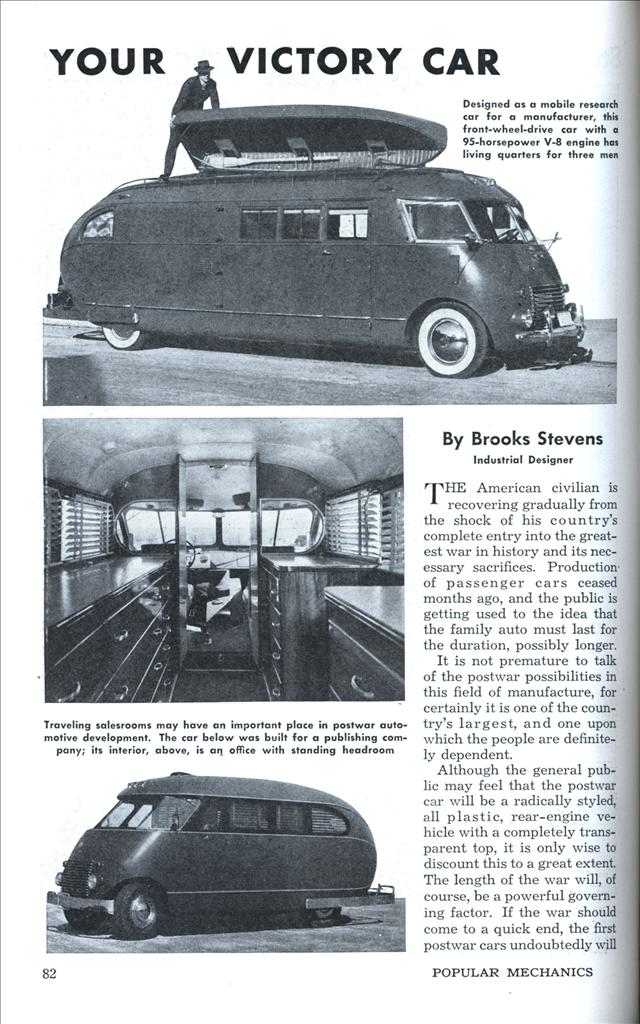 THE American civilian is recovering gradually from the shock of his country’s complete entry into the greatest war in history and its necessary sacrifices. Production of passenger cars ceased months ago, and the public is getting used to the idea that the family auto must last for the duration, possibly longer.

It is not premature to talk of the postwar possibilities in this field of manufacture, for certainly it is one of the country’s largest, and one upon which the people are definitely dependent.

Although the general public may feel that the postwar car will be a radically styled, all plastic, rear-engine vehicle with a completely transparent top, it is only wise to discount this to a great extent. The length of the war will, of course, be a powerful governing factor. If the war should come to a quick end, the first postwar cars undoubtedly will be revisions of the 1942 models. This would be the only practical measure in consideration of the thousands and thousands of dealers who have been hit so badly by the cessation of automobile manufacture.

Conversion from war production and a resumption of passenger car manufacture will be effected more quickly in this manner than to attempt complete retooling for radically designed models. In fact, revisions of 1942 models might be available six months after the war as against retooling completely for rear-engine or other radically styled models which might require 18 to 24 months before reaching the market.

Reasonable revisions will include a greater emphasis on the elimination of individual fenders, as such; front fenders will blend gracefully into the body instead of being applied appendages; and complete elimination of individual rear fenders will be effected through widening of the body to absorb them. This makes for fewer individual stampings, smoother exterior streamlining, and from a practical stand-point the generous smooth surfaces can be reshaped more easily after accidental denting.

Sacrifices made by civilians during the war and a general attitude of restraint will only be satisfied by the elimination of superfluous bright work, chrome grills, stripes, bars, and other useless ornamentation. The simplified front-end treatment will include concealed or retractable headlights, already in use, and more functional air scoop intakes as a part of a substantial bumper design.

There will and should be increased vision in this postwar model. The panoramic full-vision windshield, accomplished by moving the heavy door and corner post outward and back from its former position, will allow for 180-degree driver vision. Safety glass windshields will be bent at the % point to accomplish this partial encirclement; however, they will be bent in one plane only. Curved plastic windshields, long the dream of many designers, have not yet proven hard enough to withstand windshield – wiper action in conjunction with grit and dirt present in rain. Spherical shaped plastic windshields are apt to distort vision. Plastics, however, will play an ever-increasing role in tomorrow’s car, certainly in connection with all inter i or trim, instrument panels, control levers, and the like. Interesting and satisfactory upholstery has already been executed from woven plastics. Permanent color and durability will be the keynotes. Plastics may also play an increasing part for many small elements in connection with the power plant. 1 There has been considerable speculation as to the use of molded plastic body panels and fenders to replace steel. This is doubtful at least for the first postwar car. The tremendous increase in the production of aluminum, which in 1943 will be several times the 1939 production, will result in an increasing use of this material in automobile bodies. Stronger lightweight steel is also being experimented with.

The real postwar car will not appear until enough time has elapsed to develop a completely new type of automobile. Before touching on this “postwar car,” I should like to make another reasonable and conservative prophecy: With the ever-rising cost of this war and the possible taxation measures brought on by it, we may find the average American forced to accept an undersized car in comparison to prewar models. It is entirely possible that a civilian version of the army jeep might be a most acceptable and desirable piece of transportation equipment. Conservatively styled versions of this jeep could be manufactured during the war to fill necessary civilian needs. This conservatively styled model, in both open and closed types, could be executed with simple tooling and a minimum of fabrication expense, yet it could have pleasing lines within these limitations.

The civilian jeep could then be projected into a postwar “victory car” in a more completely styled form. This model will take on graceful lines through the elimination of fenders and stressing of longer and more sweeping lines in an effort to make up in appearance for a short wheelbase. This car would have maneuverability, reasonable speed, greatly increased operating economy, and could be moderately priced. The trend toward simplicity will do much in connection with initial cost, yet predictions on cost are dangerous because of the unknown economic results of the war.

As the world gradually emerges from war conversion to peacetime manufacture, we may find the rear-engine type as an ultimate and desirable possibility. Passengers will be moved forward for further increased vision, more interior lounging space, more complete body streamlining. The placing of engine noise, heat, and fumes behind the passengers instead of in front of them is a long-desired change. The rear engine design offers traction over the rear driving wheels, yet there is speculation as to whether it might reduce the weight over the front wheels to a point where satisfactory steering characteristics might be reduced. Moving the passengers forward enables the rear-engine car to approach more nearly the teardrop shape; however, the degree to which passengers can be moved forward is limited by the space required to turn the front wheels when steering. The rear-engine car with its relocated power plant will eliminate the need for drive-shaft tunnels and the car can then be lowered to a somewhat greater extent than existing models, yet this, too, is governed by ease of entry and exit and by existing curb heights.

Plastics will predominate and may be applicable to windows, windshields, and perhaps to some body panels, yet we must remember that three important industries will be competing for the same business— steel, aluminum, and plastics. It is impossible to say whether this business will be shared or dominated by any one material.

Smaller air-cooled engines requiring less space and offering greater operating economy will be utilized. Functional streamlining will help maintain reasonable performance with less power. There will be no tendency to offer the general public 100 to 150 miles per hour speed.

The field of automotive transportation undoubtedly will be enhanced in the postwar period by addition of a new method of merchandising a line of products. I am speaking of the definite development of sales cars or traveling display rooms. This method of demonstration and selling has been through the preliminary stages. Five years ago, we were commissioned by a client to design and produce an experimental vehicle for this purpose. Each succeeding year has brought improved models of which a number have been custom-built and put into service. A complete office and showroom on one motorized wheelbase within a length limitation of twenty feet, bumper to bumper, is the result. These sales cars are held to twenty feet in length to facilitate parking in downtown areas. The units have six feet two inches headroom, a comfortable lounge for customers, storage space for samples, a radio, heaters, fans, and the other comforts of an office. The control cabin forward, partitioned from the sales room, provides the salesman or chauffeur with air-liner vision and safety of operation. Note here the similarity to the windshield prophecy we have just made in the postwar car and the rear engine car. Powered by a standard V8 engine and utilizing tubular steel construction throughout, we have light weight and flexibility. Top speeds of 85 miles per hour are safely possible, and performance costs have shown an average of 15 miles per gallon of fuel. This type of project is applicable to many businesses, and may supplant the trailer as a mobile home because of its ease and safety of operation.

The postwar advent of freight-hauling cargo airplanes will influence commercial cross-country truck design. Cross-country haulers, already designed and ready for construction, are capable of carrying 22,000 pounds in one streamlined hull with the same driver advantages of vision pointed out earlier in this article. This truck body of welded tubular steel construction literally becomes a fuselage on wheels. The body has been designed around a practical pay load, as well as taking into consideration aerodynamic qualities and advertising appeal. Each succeeding week of worldwide warfare will find new scientific and technical discoveries which will influence the transportation field. Because of his work in almost every field of manufacture, the industrial designer is qualified to observe and prophesy acceptable trends and consumer demands.